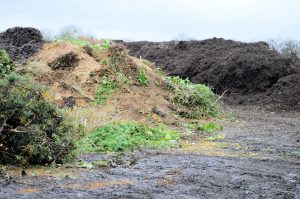 Green compost is at the centre of a highly virtuous circle for all sides of Mark Humphrey’s mixed farming business at College Farm, Maids Moreton on the edge of Buckingham.

As well as providing a valuable diversification for his modest 100 ha holding, composting council-collected garden waste for over a decade has enabled him to transform its hungry and previously drone-prone gravel soils.

To such an extent that land once deemed suitable only for barley and sheep grazing now supports bread wheat yields of over 10t/ha and a 38t/ha maize for AD enterprise in addition to a 700-ewe Mule flock.

Stubble turnips grown for lamb fattening between the wheat and maize crops means three crops every two years, with around a third of the land down to a combination of grass leys and permanent pasture for ewe grazing. 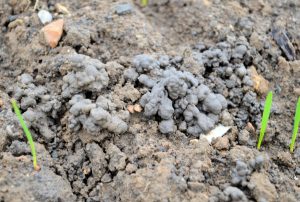 “Our move into composting was prompted by a desire to diversify operations as much as to improve our soil and cut fertiliser bills. We received the first green waste from Buckinghamshire council and local landscapers in 2003.”

The green waste is delivered to College Farm for a ‘gate fee’ through the summer and unloaded onto a large hard-core area. Here it is shredded and stockpiled in 250-300 tonne heaps, turned weekly over a six-week period then screened to less than 28mm.

The material loses about a third of its weight during the process to produce valuable nutrient-rich compost, around a third of which Mark uses himself, supplying the rest to neighbours for a small charge.

The compost is spread on the 35 ha of maize ground in April at 20t/ha and worked into the soil with tines and discs ahead of drilling in the first week of May.

Analysis shows the compost typically contains 200 kg/ha of nitrogen, but only 10% is available in the first year. This means maize fertiliser N can only be cut from a traditional 100 kg/ha to 80 kg/ha. However, it really comes into its own in the following late-sown wheat crop, providing valuable starter nutrition and allowing a Group 1 specification to be achieved from 200 kg/ha of bagged nitrogen.

“The compost is hugely beneficial for our wheats which are averaging just over 10 t/ha on soils where we would normally expect 7-8 t/ha,” pointed out Greg Taylor. “We’ve grown Crusoe for the past three years and generally make the Group 1 spec. As a rule, such performance requires around 300 kg N/ha. So we’re saving a good 100 kg/ha.

“It has helped Mark turn poor, unreliable ground into consistently productive arable land. At the same time, it has markedly improved water retention through the summer, reduced the autumn compaction risk from  maize harvesting, safeguarded wheat standing ability by ensuring good rooting, and maintained soil phosphate and potash indices at well above 2 without additional fertilisation.”

Stubble turnips are drilled at College Farm as soon as the wheat is harvested in early August, taking advantage of the well-conditioned soil and any residual nitrogen for the best possible start.

As well as an excellent ration for fat lamb grazing, the turnips provide valuable early winter cover to minimise nutrient leaching while protecting the soil surface and maintaining its structure. And, of course, the grazing adds valuable extra organic matter to the ground in what is a highly virtuous circle for the whole farm.