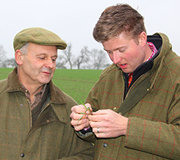 With careful planning and site selection, Lawrence & Antony Bonner and their Agrii team rose to the Best of British Wheat 15 Tonne Challenge spectacularly at Coldharbour Farm, near Brackley in 2014 with a 2.5 ha crop of Dickens averaging 15.04 t/ha.

More importantly, the iFarm crop produced a good 4 t/ha more than the other half of the same field where JB Diego was grown to a current Top 25% agronomic standard to deliver a gross margin advantage of nearly £300/ha (39%) at a wheat price of £110/t.

Interestingly too, the team harvested fully 15.4 t/ha from the half of the early October-sown Challenge crop drilled at a variable rate average of 250 seeds/m2 to SoilQuest management zones compared with 14.7 t/ha from the other half sown at an average 350 seeds/m2. 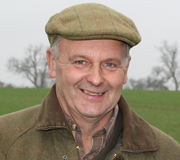 “Working with Agrii on the 15t Challenge has been a really valuable experience,” explained Lawrence Bonner who has responsibility for the cropping on the 600 ha mixed farm, now into its 22nd year of hosting grower trials and demonstrations.

“A decent amount of sunlight and soil moisture without excessive temperatures allowed our first wheats to keep going nicely to give us 11.5 t/ha across the farm in 2014 against a five year average of around 10t/ha. Even in this satisfying season it was interesting to see how much room we still have for cost-effective improvement.

“A yield of 15t/ha may not be achievable here – or indeed anywhere – every season or on every field. But the opportunity to improve yields and margins by more than a third in a particular season or field is something no one can afford to ignore. That’s why we’re extending our challenge cropping to a whole 18 ha field with the same level of precision agronomy in 2015.” 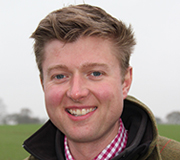 The clay loam ground at Coldharbour Farm has profited from the Bonner family’s excellent rotation management with regular additions of farmyard manure giving an organic matter content of 6%. In addition to a well-structured soil, an extended rotation including rape, beans and maize – plus grass leys in some cases – has kept black-grass problems under very effective control.

“Unlike many, Lawrence and Antony weren’t tempted to maul-in a winter crop under the atrocious conditions of 2012/13, opting instead to drill spring beans once the ground became fit to travel in the spring,” pointed out Agrii agronomist, Greg Taylor who was responsible for managing the challenge crop. So we had a decent soil structure and a perfect entry for the wheat, with early 2014 soil analyses showing 60 kg/ha of potentially available N.

“We employed SoilQuest data to apply variable rate TSP, and fed for the full 15 t, using 320 kg N/ha from the bag in five splits, 55% after the flag leaf. Guided by the latest results from detailed research at our AgriiFocus Technology Centre near Swindon, we supported this with particular attention to PGR management at T0 and T1; robust rates of multisite inhibitor, strobilurin, SDHI and triazole fungicides in a four spray programme; and carefully tailored micro-nutrient applications on the basis of regular tissue analyses.

“Our input levels were well above current practice. But we only used the fertilisers and agrochemicals being employed on the farm crops and everything we did was prescriptive, driven by the particular conditions of the season and needs of the crop. The results show our extra attention was well-justified financially, even at this season’s disappointing crop values .”

The 2014 Challenge crop success at Coldharbour Farm has really underlined the value of careful variety choice and attention to agronomic detail from sowing and T(-1) treatment right through to harvest, doing everything possible to eliminate key yield limiting factors and ensure the most favourable conditions for healthy plant growth and maximum grain fill.

The 15.4 t/ha yield from the lower seed rate of Dickens certainly demonstrated the value of a more open, upright canopy in crop efficiency. Having said that, Lawrence and Greg note that in a less mild winter with lower tiller production and survival the higher seed rate may well have been essential to maximise output.

Both parts of the challenge crop, however, stayed green approximately two weeks longer than the similar maturity JB Diego alongside them, late season assessments highlighting the green area advantage that almost certainly played a major part in delivering the extra yield.

Alongside this, the team see greater photosynthesis from a more open and efficient canopy and higher ear fertility from better balanced nutrition as being the most important physiological keys to the superior performance of the Challenge crop.

“We could see few differences between the two parts of the field in the spring,” noted Lawrence Bonner. “But by the time we got to the summer it was clear our extra agronomy had produced a very different type of crop.”

“No one input was the key to this,” Greg Taylor added. “Instead, our success was very much down to a combination of all the things we did; plus a decent platform from the rotation, a really good soil structure and, I have to say, the right temperatures, sunlight and moisture levels from a good growing season.”