Transitioning to No-Till on heavy ground

Regenerative agriculture based on the least possible tillage is attracting growing interest across the UK for the opportunities it offers to improve soil health and resilience, increase farmland biodiversity, and cut carbon emissions.

However, direct drilling experiences of the past make it essential to introduce regenerative techniques in carefully-planned way if a number of dangerous pitfalls are to be avoided, warns senior Agrii agronomist, Andrew Richards who chairs the national Soil and Water Management Centre at Harper Adams University.

While he sees no-till farming as a viable and valuable goal for many growers, he is concerned about the speed with which farms are being tempted to ditch cultivation equipment without effectively paving the way for the change.

His concerns are born of bitter lessons learned in the 1990s when a wholesale move to minimum tillage swept across the country, largely driven by a sharp fall in wheat prices.

“Many heavy land producers looking to cut costs by switching to large sets of discs in place of the plough ran into serious issues with compaction,” he recalls. “So, they had to invest in larger tractors and deep-loosening tines to aid sub-surface drainage. But heavier machines resulted in even greater compaction. And blackgrass, in particular, profited from both the impeded drainage and lack of burial, increasing the reliance on chemistry for control and, in turn, pressure on herbicide resistance.

“Rather than attempting to reset soil structure each year with heavy tillage trains, many growers would have been better-off taking a step back and asking themselves whether their soil structure and drainage were good enough for reduced tillage.”

This is exactly what  Agrii agronomist Mr Richards urges growers keen to reduce tillage to the bare minimum to have at the forefront of their minds today to avoid similar pitfalls; especially so with the last two autumns highlighting the increasing unpredictability of UK weather.

He points to recent examples of farms spending upwards of £70,000 on no-till disc drills but unable to close the seed slot adequately on heavier land, with seed rotting or eaten by slugs. That’s if they have been able to travel at all.

“It is essential we all have a planned approach to weaning soils off tillage, rather than just jumping-in at the deep end. Which drill to buy should be our very last question.”

So, what does  Agrii Senior Agronomist, Andrew Richards suggest as the best-planned way ahead?

Well, the first and most fundamental question is whether the land itself is suitable for no-till. Studies suggest that about 70-75% of the UK arable area could be managed in this way. But particularly careful consideration needs to be given to ground where permanent grass dominated before the food production drive of WW II, often in lower lying areas and without drainage systems.

For suitable land the next consideration must be the quality of sub-surface drainage, which is best judged after periods of significant rainfall when underlying problems will be clearly evident in wetter areas or ponding.

Rectifying these issues could be as simple as clearing out ditches or jetting existing land drains, with heavy clay soils likely to benefit from a mole draining, even where permanent under-drainage isn’t in place. Or it might be necessary to make a larger investment in drainage, which is probably best done rotationally over time to spread both the cost and impact.

“Underlying drainage problems must be dealt with before moving to no-till,” insists Mr Richards. “Then, see where you are in terms of pH and correct it. Also, look at your organic matter content and consider incorporating manures before you cut back on tillage.

“Cover crops – and, to a lesser extent, crop residues – can be valuable in protecting soils and maintaining soil structure in no-till regimes. But there is extensive trial evidence to show that roots alone are most unlikely to improve the structure more than marginally. And cover cropping can build soil organic matter, this will be a very slow process.”

When considering cover crops, Mr Richards suggests taking the opportunity to look at how extra diversity can be introduced into the whole rotation, pointing out that keeping active roots in the ground with a wider array of crop species will increase the diversity of soil biology. In turn, this can have a positive impact on organic matter, soil structure and overall soil health without necessarily compromising margins.

He illustrates what can be done with an exercise he ran recently with a client exploring a lower risk, regenerative rotational option for heavy land. Last season, spring beans after a winter cover crop failed to establish on one block of land, so the multi-species cover they were sown into was left to grow until the autumn. This left a much better soil structure for the following wheat, making it a potential strategy for the future.

Despite the income of one less crop, the average annual gross margin over the rotation only fell by £10/ha – which, together with the cost of establishing and managing the extended cover could be easily offset by revenue from sheep grazing.

The rotational restructuring also offered valuable reductions in the fixed costs involved – especially in cultivation and harvesting – and a considerable saving in inputs – particularly bagged nitrogen.

“This sort of rotation really has a lot going for it,” Mr Richards says. “What’s more, any compaction before the land goes into the cover crop can easily be corrected with a low-disturbance subsoiler in the spring when soils are drying and in good condition.”

On the machinery side, he recommends gradually reducing tillage intensity by modifying existing machinery before splashing out on an expensive new direct drill, pointing to clients who have successfully fitted low-disturbance tines and less aggressive discs onto existing cultivators to disturb less soil.

Lifting the discs out of work on a cultivator drill can be valuable in reducing the level of tillage, too. As can be changing from the likes of a Horsch Joker disc cultivator to a Cruiser tine machine capable of working at shallower depths.

Second-hand tine drills can be a useful bridge from intensive cultivations to no-till, in Mr Richards’ experience, starting with crops like beans and gradually moving to cereals as soil workability improves. He has also found an element of Controlled Traffic Farming (CTF) to reduce compaction from trafficking across the field key to many no-till success stories. 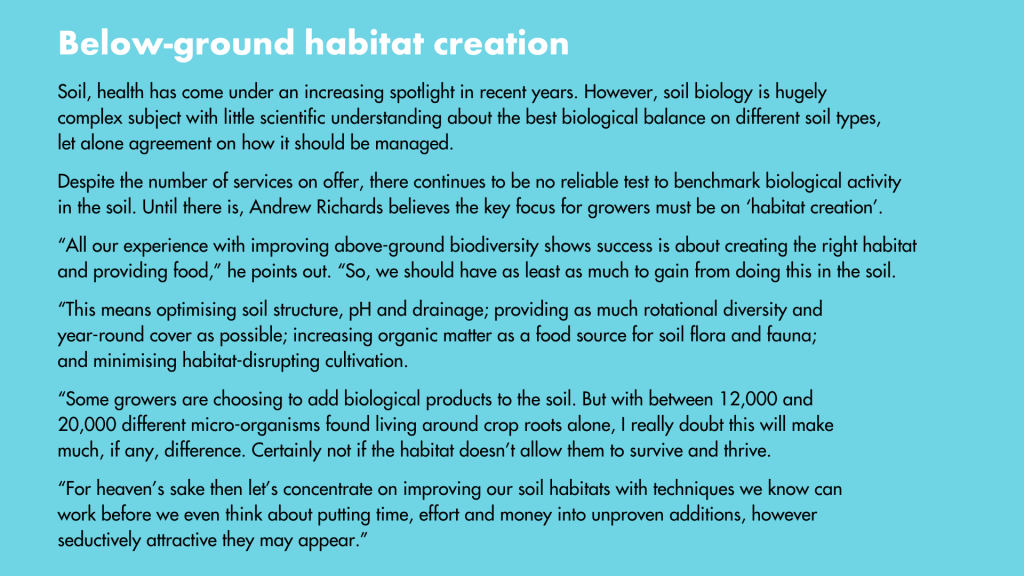 The regenerative agricultural goal for most is to have an ultra-low disturbance disc drill as the sole establishment method. While many are making this approach work once soils are well-structured and organic matter levels sufficient, he always advises growers to maintain some flexibility in their system to cater for a maritime climate that is becoming far less predictable.

“Our aim has to be to build long-term strength and resilience into our soils, but no matter how good a soil becomes, 120mm of rain in a week in August is always going to create problems where we a large modern combine and weighty grain trailers.

“Some no-till drills are also heavy by nature, meaning they just aren’t going to be able to travel without damaging the ground in extremely wet autumns,” he adds. “So, we need to be willing and able to use a low disturbance subsoiler or a lighter weight tine drill with a shallow cultivator should the need arise.”