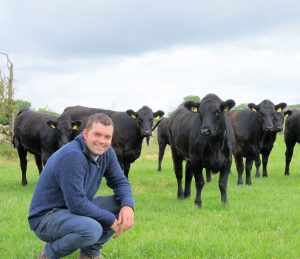 Robert Fleming of South Milton, Glenluce, Stranraer, has spent years honing the genetics of his 50 Stairhaven pedigree Aberdeen Angus and 190 commercial suckler cows, delivering high herd health status bulls to dairy customers across the UK. Youngstock from the commercial herd have been reared and sold as store cattle to local farmers, from between 10 to 16 months of age.

But overseeding three, half hectare plots in fields not touched for 35 years, with three different seeds mixtures followed by rotational grazing, has highlighted how much additional grass could potentially be grown across the 240ha farm.

“To be honest, I never thought we would tinker with this ground and have grazed youngstock here for years. But correcting the pH to 6.2 with granulated calcium lime, and introducing some of the latest varieties and species into the sward, has catapulted its performance,” says Mr. Fleming.

“We have been measuring grass growth from this February – aiming to grow 12.5 tonnes of dry matter per hectare this year. By the start of July we had already done 9.3 tonnes, which is twice as much grass as in the untreated areas. So we will beat the overall target easily by the end of the growing season.”

The trial is just one of several carried out at South Milton this year, run as part of an iFarm initiative, managed by local Agrii agronomist Lorna Galloway.

The soil of the trial fields is sandy and would never take a full reseed with a plough for fear of soil erosion. Separated slurry was injected at a rate of 1500 gallons/ha in February 2015, and the trial area harrowed and grazed hard with sheep and youngstock at the end of April.

The plots were sown at a rate of 30kg/ha with a Duncan Direct Drill on 30 April; the cattle and sheep came back to graze for a week and then the field was shut up for six weeks.

The plots were drilled with Grassmax Dual Purpose, which contains three ryegrasses and is 10% white clover; Lofa festulolium – a resilient, high quality Advanced Hybrid Ryegrass; and Grassmax Cut, which has Lofa with two ryegrasses in it along with red clover.

“We had reasonable rainfall, so by the time of our first meeting on 2 June, the grasses and clovers could be clearly seen coming through,” Mr. Fleming commented.

“To start with last year we grazed for three days with cattle at 10 animals per hectare, and then left it for 21 days to regrow. We weigh regularly and were recording 1.26kg of growth per day for store calves. But we couldn’t keep up with the grass and had to top it. It needed more animals or a more confined system of grazing.

“In previous years we had set stocked these fields with a large number of animals, with no on-off policy. This has opened our eyes to the potential of controlled grazing using paddocks.”

This spring, more separated slurry was applied before 50 young cattle, that were gaining 0.74kg/day, were put onto the trials site.

Weighed again, two 21-day rounds later, their weight gain had increased to 1.57kg per day. While animal performance increased, the quality of the grass and clover growth had also improved.

“This has gone beyond all my expectations and has led to a complete revision of how we graze our cattle. We are now sub-dividing the whole farm into paddocks, with 10km of electric fencing.

“The suckler herd will reduce to 180 cows and we will aim to finish all the youngstock instead of selling them as stores. We may even buy in some cattle to finish on some of our separate land.

“Becoming the first forage iFarm has been a revelation to me, and we have Lorna to thank for encouraging us to try this out. We have also saved on anthelmintic treatments – faecal egg counts show the cattle to be worm-free on these revived pastures.

“We are not favouring one seeds mixture over any other – they are all successful, peaking at different times of the year.  We will sow different mixtures in strips across each field.

“We like to have white and red clovers and will apply dressings of 30kg of nitrogen fertiliser/ha, little and often throughout the season. Any surplus forage will be made into silage bales to offer a consistent diet throughout the year.

“We are lucky that the Aberdeen Angus is a good breed for rearing and feeding on grass, and I am now building the farming system to gain as much production from pasture.

“In effect I will be able to double my output without buying any more land. And being part of the iFarm means I can share my findings with other farmers in south west Scotland, who can also benefit from rejuvenating their swards and paddock grazing.”