A novel weather-based decision support system developed over the past three seasons is showing considerable promise in helping Agrii agronomists and their growers better tailor fungicide programmes to local Septoria tritici risk for the greatest cost-effectiveness.

The system uses meteorological data from the company’s network of 190 farm-based weather stations across the country as an indicator of likely disease pressure. Alongside crop specific information such as drilling date, varietal resistance and previous fungicide applications, this extra intelligence helps product mixtures and rates to be adjusted in line with anticipated Septoria risk throughout the growing season.

“Our detailed monitoring showed less rainy days in 2015 together with longer latent periods between infection and disease appearance, leading to later symptoms and slower overall disease development than 2014.

“We employed these benchmarks and other important weather data to estimate local disease pressures and inform spraying decisions over the 2016 season.

“At the same time, we ran a series of carefully controlled trials at our key Septoria management sites to assess the effectiveness of a range of different spraying regimes.”

At the Lenham site in Kent, for instance, the system suggested high Septoria pressure was likely at T1 and at T2 on the basis of latent Leaf 3 and 2 infections. And by far the highest yields and margins came from high trial fungicide input regimes at these timings.

Indeed, at an average of around  £370/ha, the margin over fungicide costs from the high input trial regimes at T1 and T2 was well in excess of those treatments involving low inputs at either or both timings (Figure). 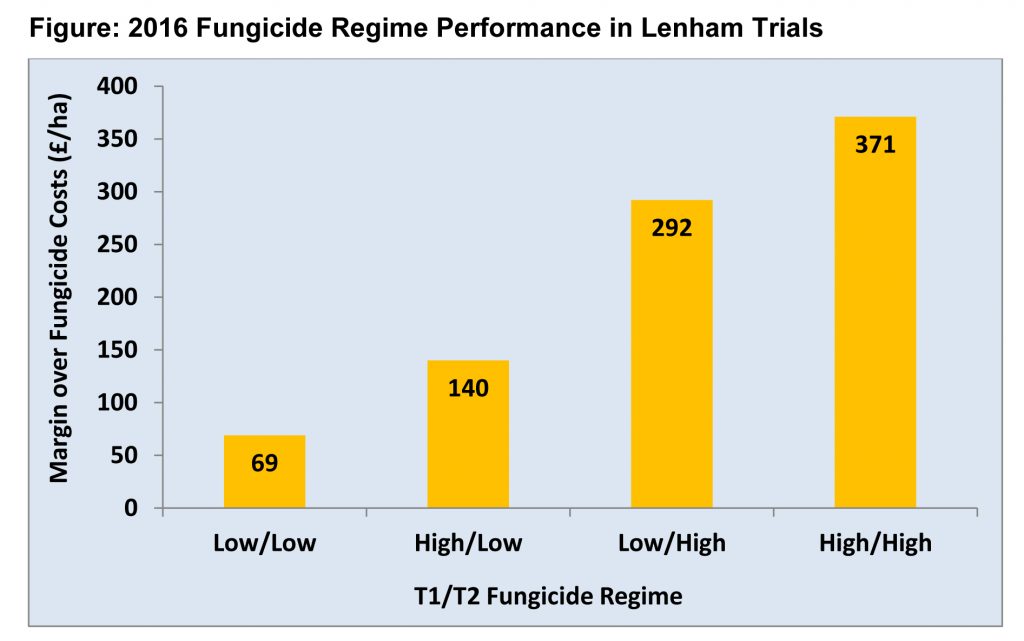 “The past season has given us confidence in the value of our decision support system for leaf emergence-driven fungicide programmes,” Dr Salinari commented. “This was In contrast to the event-based forecasting models we’ve been studying in parallel which have proved unsuited to the UK treatment approach.

“Of course, it’s early days yet. We’re continuing to test and refine the system with our agronomists across the country to help them tailor their spraying recommendations
as closely as possible to anticipated local disease levels before they become apparent in visible symptoms.

“Knowing the risk of latent infections present in the canopy and ready to sporulate as well as the potential for newly established infections as each leaf emerges promises to give them an important edge in ensuring the most cost-effective treatment programmes.

“In addition to developing this system, we’re continuing to test other decision support tools for Septoria control and explore opportunities for adapting them to better meet UK needs. At the same time, we’re in the middle of two exciting projects with academic and commercial partners co-funded by the UK’s Innovation agency, Innovate UK.

“Both are based on in-field monitoring. The first – Capture – predicts early season disease pressure by image analysis while the second – SeptRe – genetically identifies different Septoria strains so they can be targeted with the most effective chemistry.

“After two years of investigation, both these projects are showing considerable promise in moving our Septoria management decision support to the next level,” concluded Dr Salinari.

“Just like our weather-based decision support system, we see these providing extra intelligence to be carefully integrated with the best local knowledge and crop-specific information for progressively greater precision in managing this major yield-robber.”