Just a few days until we fly out! - Agrii - Connecting Agri-science with farming

Just a few days until we fly out! 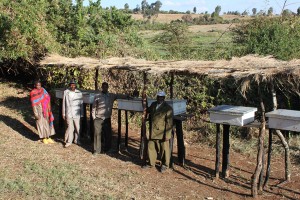 With just a few days until we fly I thought it may be a timely opportunity to explain a little more about what we hope to achieve on our ‘Beehive Challenge’ in Tanzania. By way of an introduction to Tanzania, it is the biggest country in East Africa which also boasts over 4 million wild animals per square km! It is probably most famous for being the home of Mount Kilimanjaro, the highest freestanding mountain in the world and Kili, as it is affectionately known, is not far from where we will be working.

Over the past 75 years the area of forest in Tanzania has been dropping dramatically, which is a serious cause for concern. The forests in Tanzania are key to the countries, and many of its inhabitants, survival. Although the first hand effects of their loss may seem bad enough, the consequent knock on effects are even worse and can result in a lowered ability to farm successfully, less food and less ability to make an income. By building beehives we will be providing the people of the villages of the Nou Forest with an alternative income source that doesn’t rely solely on the forest.

Our target for production has been set at 67 beehives which we will need to produce over two days of building. However, as we all love a challenge it would be a real shame not to make it to a round 70! The beehives will be distributed to the Endoji beekeepers group (40 hives) and the smaller Soleto group (27 hives). The Endoji group have very kindly offered to host us all in a celebratory dinner on the day we deliver the beehives and I don’t think they would be very receptive if we only take them half, so I guess that means we will have to work pretty hard to get them all completed on time!!

For the buzzing professional beekeepers out there we will be producing Langstroth and top bar hives. These have multiple benefits over the traditional log hives. They can be reused, they produce a cleaner honey output and they can increase honey yield per hive from a mere 3-5kg to a whopping 42kg per hive, that’s over an 800% increase in yield – imagine if we could do that with any of our outputs in the UK! 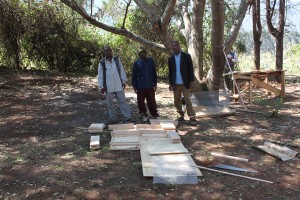 An obvious concern with aiming to increase yield by such a vast volume is the access to markets, however, the work of Farm Africa doesn’t stop at the production of the honey. The creation of a beekeeping cooperative and two associations has led to the development of two honey collection and processing centres. This has subsequently led to formal route to market as the Tanzanian Food and Drugs Association Authority has provided a barcode for use on the Nou Forest honey which allows the associations to sell honey in Tanzanian supermarkets. I know I for one am incredibly excited about trying some of this high quality honey first hand! Although there is a chance I’ll return resembling Winnie the Pooh with a mild honey addiction… 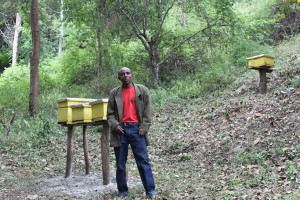 Although our 67 (70!) beehives are very unlikely to solve all of the problems in the Nou Forest, it really is a fantastic opportunity to work with some of the very talented individuals that live there. I am looking forward to talking to them about their agriculture and their lifestyles. Agriculture in the UK is certainly facing some challenges, but I’d be willing to bet that the farmers in the Nou Forest are always standing with their back against a wall and yet they power on and hang in there for a better year or even just a better day.

For more information about the trip, Farm Africa and the other participants please visit www.farmafrica.org/beehive-challenge

Donations to the trip are always welcome too and can be made here.

« Return to the Blog listings