Manager, Kevin Smith is looking to hide his oilseed rape under a cover of buckwheat and volunteer cereals to protect it from the ubiquitous beetle.

He almost gave up on the crop before this year, but is trying a new low-risk:low-cost combination of direct drilling and companion cropping to beat oilseed rape’s most damaging pest.

And it seems to be working, with small oilseed rape plants with two cotyledon leaves and one true leaf untouched by hungry flea beetles in mid-September underneath the green protective cover.

This layer of just-flowering buckwheat and volunteer cereals from a previous winter barley crop was also keeping the thin chalky loam soil moist in a dry September spell.

“We were looking at giving up on oilseed rape, but decided to have another go and this time look to do everything right,” he says.

Harvest 2019 saw oilseed rape yields dip below 3t/ha, so the area was cut in half to 50ha for this season and a new establishment approach taken on the farm on the edge of Salisbury Plain.

Mr Smith was keen to stop using insecticides, which he found ineffective, and so looked to keep the crop hidden in the key flea beetle migration period of late August to end-September.

Working with his Agrii agronomist Todd Jex, he adopted an establishment system which is having increasing success in deflecting flea beetle attacks, while only growing oilseed rape in a one-in-four year rotation or wider. 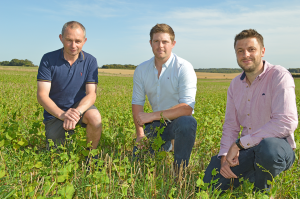 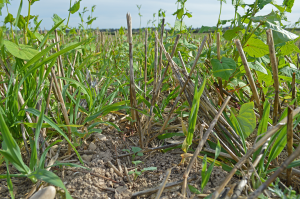 Mr Jex has seen success across his area of Dorset and parts of Hampshire and Wiltshire with the approach which protects the rapeseed and encourages flea beetle predators such as parasitic wasps.

“It’s a system that uses the minimum of costs until we are confident the crop will not succumb to adult beetles or larvae,” he says.
Mr Smith’s crop was established with the only variable costs being seed, fertiliser and slug pellets, with no glyphosate or pre-emergence herbicide applied, using the following sequence.

Altogether, Mr Fraser has drilled 520ha of oilseed rape this season and sees more of his growers moving towards the direct drilling/companion cropping combination.

“A lot of the crops I drilled last season used this system and yielded about 3.5-4.0t/ha,” he says.

Mr Smith is looking to use a graminicide like propaquizafop (Shogun) to control volunteer cereals and an imazamox-based herbicide for broadleaved weeds, then propyzamide (Kerb) later if blackgrass proves troublesome.

No insecticides are planned which will hopefully encourage flea beetle predators, while maintaining the wide insect population which was seen when drilling the companion crop.

Mr Jex points out that flea beetles tend to look for bare soil, so young green oilseed plants against a brown background make an ideal target.

While adult flea beetles generally select oilseed rape plants their larvae can crawl up to attack buckwheat which dilutes any damage and also kills the larvae as buckwheat dies with the cold.

One downside of the system is that it produces a green cover than can attract slugs. So ferric phosphate pelleting has been important.Reproduced with kind permission of David Jones and Farmers Weekly