Enemies of the past? - Agrii - Connecting Agri-science with farming

Enemies of the past?

Agrii Fruit Agronomist Kevin Workman takes a look at some of the emerging apple pests.
The fluctuating UK climate tests everyone in one way or another. Top Fruit growers are no exception; in recent seasons we have witnessed resurgence in some of the more unusual insects appearing in their crops; including some long forgotten foes, which we had considered more of a nuisance, than a major issue.
The unseasonal weather patterns experienced in 2012 are seen as the probable cause of change in the pattern of insecticide activity; this may well have resulted in pests such as the apple fruit Rhynchites (Rhynchites aequatus) causing issues in several orchards last season.
One theory is that the fluctuating temperatures upset the normal development of this weevil, which led to a prolonged emergence and coupled with the general tendency of the fruit growing industry to move away from broad-spectrum insecticides, meant that the normal control achieved as a side effect to caterpillar and aphid targeted sprays, failed, resulting in more fruit than ‘normal’ affected.
This particular pest was once considered to reside mainly in Kent but it can now be detected throughout East Anglia and the West Midlands.
Anthonomus pomorum 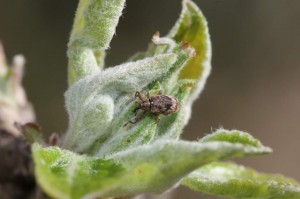 Another weevil species that is common in the cider orchards in the West of England is appearing more and more in the dessert orchards of the South and East. The Apple blossom weevil (Anthonomus pomorum) is viewed by some almost as a friend when present at low levels, especially in seasons with good strong bloom and ideal pollination conditions, when it offers a possible welcome reduction in fruit numbers, but it can seriously reduce the overall crop if populations are left to multiply. 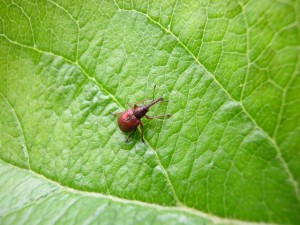 Apple blossom weevil, like Rhynchities, is difficult to detect and a grower may not realise that he has an issue until the damage is evident.  At this stage we know some control may still be possible, but is unlikely to be effective in reducing numbers significantly in the following year, and certainly won’t save any crop or reduce any damage in the present season.
We know that controlling both of these pests requires a similar procedure and pesticide, but the application of a suitable insecticide is required outside the normal time frame for early season pest application, this makes detection and identification key to an effective strategy.
Blossom weevil are best controlled at or soon after bud burst, using an insecticide with activity against weevil species; application at this time is ‘unusual’ due to other significant pests being mainly absent until later in the season.    Rhynchities can be well controlled at mouse ear, again earlier than standard early season insecticide applications.
Lesser Apple Foliage Weevil (Mecinus pyraster) can now be found in all the major fruit growing areas of the United Kingdom. A very small weevil species in comparison to some, often found on Pear but seemingly particularly fond of Bramley, this weevil can be found on any variety.  While we recognize from our crop walking experience this pest isn’t normally found in great numbers and its damage, the grazing of the upper-leaf surface, can usually be treated as an irritation rather than a major issue.
Mecinus pyraster 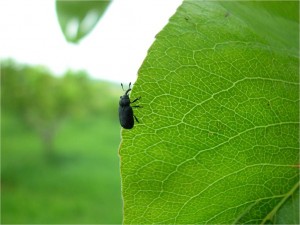 Like most weevil species, Mecinus pyraster has a ‘drop and play dead’ response to any perceived threat.  This makes control difficult, as when sensing an approaching sprayer; ‘most likely’ via vibration, the weevil drops to the orchard floor, taking it out of ‘the line of fire’ and the effective reach of any insecticide.

The accurate identification of pests is critical to achieving timely and effective control. In recent years several trapping systems have been refined for some of the major fruit pests, largely due to the continued hard work and technical breakthroughs by the entomology team at East Malling in respect of pheromone synthesis and plant volatile discovery; valuable research work often financed by the HDC.
In my visits to growers, it is clear they have been quick to install these trapping systems, sometimes with help from producer organisation funding and incentive schemes, but it is also very noticeable that in some cases these traps are left to their own devices and the resultant catches remain largely unmonitored and un-acted upon.
With the possible (likely) loss of more of our insecticide arsenal, application will, as always, need to be made with the upmost precision to ensure good control before damage occurs.
Many of these pests are masters of disguise, or at least they have very good camouflage and are difficult to spot without meticulous crop inspection, trapping, or the use of a beating tray!
With the volatility of our UK climate and the increasing pressure on the ‘pesticide arsenal’ growers need to be ‘on their toes’ to keep pace with natures surprises. Assiduously following a strategy of monitoring and recording the prevalence of weevil activity, will be a key requirement for keeping one step ahead of the pests.