A competitive advantage in black-grass management

Wheat variety choice can be almost as important as robust herbicide treatment in managing difficult grass weeds, according the latest research into weed competitiveness at Agrii’s specialist black-grass management centre at Stow Longa.

Although most apparent under a deliberately restricted pre-em only treatment regime, major differences in weed competitiveness and resulting yields between varieties were equally evident with a robust pre-em plus early post-em herbicide programme, underlining the value of variety choice regardless of agronomy.

Interestingly too, it wasn’t always the varieties that Agrii head of agronomy, Colin Lloyd and his R&D team initially felt would be the most competitive that actually proved to be.

“Our trial work under the intentionally intense black-grass pressures of Stow Longa for more than seven years now has shown that superior weed competiveness in a winter wheat doesn’t just come from a free tillering ability or more prostrate autumn growth habit,” he reports. “It depends on a whole host of other characteristics, including the speed of early spring growth.

“At first sight we would have expected varieties like Claire and more recently Relay to be highly competitive. But they turn out to be some of the least effective in coping with black-grass. This reinforces the fact that reliable recommendations can only be made from the sort of detailed, statistically valid research in which we specialise.”

The fully replicated Agrii 2011/12 Stow Longa trials examined more than 20 of today’s leading varieties plus a ‘wild card’ sourced from France grown under both full and poor treatment regimes but otherwise identical agronomy. All varieties were sown at 350 seeds/m2 in early October, levels of black-grass control were calculated from late May ear counts and yields compared at 15% moisture at harvest in early September.

At 71% under the robust treatment regime and just 48% where the programme was compromised, average black-grass control levels were very much as expected with large weed populations
– 300 ears/m2 in untreated controls – and the site’s multiple-resistance status.

With the robust regime, control levels in the varieties varied from more than 85% in the best case to less than 60% in the worst. Unsurprisingly, perhaps, the gap was even wider under the compromised herbicide regime – ranging from 75% to just 25%.

While yields clearly varied with variety genetic potential and (especially last season) disease susceptibility, analysis of yield differences within variety between the robust and compromised herbicide regimes to eliminate these distortions highlight the value of relative black-grass competitiveness (Figure). 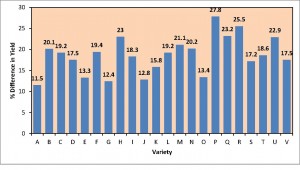 “The 17% average yield difference we recorded between the two herbicide regimes across all varieties underlines the critical importance of robust black-grass treatment,” points out Colin Lloyd. “But between varieties the difference was almost as great – from just 11.5% yield loss in the most competitive to 27.8% in the least competitive where spraying was compromised. This proves variety choice is almost on a par with robust herbicide treatment in grass weed management value.

“What’s more, the significant difference in control levels between the most and least competitive varieties even with robust herbicide treatment demonstrates the value of informed variety choice whatever the agronomy.

“Back in 2004 we had a hunch variety competitiveness was a valuable extra grass weed management tool but there was no science behind it. So we set out to examine the whole issue in our trial work. Having established exactly how significant variety choice can be, it’s good to have researchers from Rothamsted working alongside us at Stow Longa from this season to investigate the key aspects of plant architecture and development involved.”

What lessons can be learnt from this ground-breaking work to help UK growers improve black-grass management in the coming season and beyond ?

First and foremost, Colin Lloyd stresses that variety choice must be seen as an important extra cultural control that can be brought to bear alongside cultivations, delayed drilling, pre-planting Roundup and rotations to take the pressure off an increasingly restricted and hard-pressed herbicide armoury. Especially so, since there appears to be sufficient variation in varietal competitiveness to work with in all classes of wheat.

“As it remains impossible to predict competitiveness from plant type on current knowledge, variety choices have to be made on the basis of sound trial evidence rather than gut feel,” he adds. “We’ve seen from our own experience how wrong even very logical assumptions can be.

“Perhaps most importantly, though, the knowledge we now have on varietal competitiveness and the growing intelligence our research is providing on its interaction with other key cultural and chemical components of difficult grass weed control gives our agronomists and growers the opportunity to fine-tune their integrated management programmes to far greater effect.

“As well as the best possible advice on variety mixes for specific farm circumstances, for instance, we can increasingly match varieties very much more intelligently to particular fields or conditions.  Equally, wherever pre-em or post-em spraying is restricted by conditions, we can prioritise varieties for treatment on the basis of their particular need, markedly improving agronomic flexibility at the same time as reducing agronomic risk.”