Extensive Agrii research across the country over the past 11 years shows that, like black-grass, a jigsaw of cultural controls can really help beat the beetle.

In the same way as black-grass, though, these need to be applied alongside one another with careful planning that is firmly based on the degree of field risk, starts with the rotation, and has sufficient flexibility to cater for different conditions – especially soil moisture.

“It’s vital to appreciate that insufficient moisture or excessive pressure from the pest at establishment means we are likely to be fighting a losing battle whatever we do,” stresses trials manager, Steve Corbett.

“So, we need to have a wide enough rotation to restrict the build-up of local pressure and, dare I suggest it, avoid the sort of block cropping that really concentrates flea beetle populations. And, of course, we shouldn’t even consider sowing rape unless and until we have sufficient moisture in the ground.

“Just like black-grass with wheat, the rotational flexibility not to sow OSR when the risk is too high is fundamental. As is having the right crop ahead of it. Mainly because, time and again, all our work in high CSFB pressure areas of the country highlights the overwhelming importance of presenting a barrier to the beetle which minimises the ‘green on brown’ attractiveness of the young rape crop.”

Agrii’s field-scale trials at Chiseldon in Wiltshire last season, indeed, showed average shot-holing damage in a crop grown on bare ground was twice that on ground with a good covering of winter barley debris.

At Langley in Essex in 2018, there was a more than threefold difference in leaf damage between a young crop in bare soil and one with decent straw and chaff coverage. And, averaged across varieties and other treatments in 2019, the difference in damage between a crop sown into high (12”) and low (3”) stubbles was almost as substantial at the AgriiFocus technology centre (Figure 1). 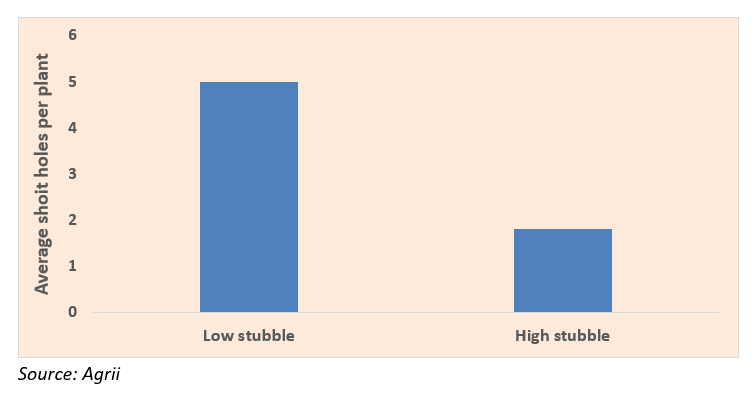 “Across a 70 acre field at Eyeworth in Bedfordshire last season, we saw massive differences in damage where areas of the preceding wheat crop had been sprayed-off for blackgrass,” adds Agrii head of agronomy, Colin Lloyd. “In marked contrast to the evenly established crop with almost no shot-holing in the bulk of the field, the sprayed-off areas without any straw cover were devastated, with hardly any surviving plants.”

Where a preceding fallow, spring barley or straw crop baled for sale means little, if any, decent cover, Steve suggests a nurse or companion crop could offer a valuable alternative CSFB barrier. However, his experience underlines the need to plan and manage these options very carefully as well as the extent to which the weather can defeat the best laid plans.

However, at Throws Farm buckwheat nurse crops sown in early July into much drier soils resulted in poor establishment and relatively high levels of damage to OSR sowings two weeks later – up to 37% on bare soils and 20% with decent stubbles.

As a companion crop, buckwheat drilled at the same rate with the OSR did a much better job, keeping average CSFB damage down to 3.5% against the 24%  average of the nurse crop plots.

“In other trials, we’ve seen a buckwheat companion crop do as well in reducing shot-holing as some promising new seed treatments we’ve been investigating,” points out Steve. “In this case, as a nurse crop lack of moisture meant it couldn’t get away and provided far too little cover. In contrast, the companion plots were sown into more moisture.

“Having said that, we’ve also found nurse crops can grow far too well, shielding the rape planted into them but, at the same time, compromising their establishment. And we’ve seen companion crops be a waste of time and effort when they haven’t had enough moisture.

“Like the crop itself, sufficient moisture is the critical factor. Equally important with companion cropping, in particular, our work has shown is using the right variety of buckwheat at the right rate and sowing it at the right depth.

“The two varieties we’ve been studying are like chalk and cheese. Common buckwheat is far thinner, more spindly and runs to flower too rapidly to give a decently sustained cover, while the alternative establishes a much better canopy and gives more extended protection to the young rape. At the same time, the size and shape of the common buckwheat seeds means they separate out more from the OSR in single hopper drills, leading to less even crop cover.

“It’s a jigsaw of agronomic support we have to put together here – including minimal soil disturbance at drilling, fast-developing varieties, good seedbed nutrition and timely early insecticide spraying as well as long stubbles, good soil cover and/or effective nurse or companion cropping,” he insists. “It’s a complicated business getting all the pieces in the right place.”

Agrii regional technical adviser, David Felce who farms at St Neots agrees that putting it all together is by no means easy. However, he has no doubt of the value it offers.

“A good seedbed with sufficient moisture is crucial,” he insists. “Otherwise it really isn’t worth bothering with OSR these days. Spreading slurry or digestate can really help get the crop away. But these need to be incorporated and we know it’s important to minimise soil disturbance for the least ‘green on brown’ flea beetle attractiveness. So, there’s a clear dilemma here.

“Whether it’s a hybrid or pure line, a fast-developing variety is important too. This is crystal clear in our trials and in the field.  However, we’ve found no value in increasing seed rates as a defence. This only leads to thinner-stemmed crops less able both to tolerate larvae and to branch away from them in the spring.

“Our work shows the value of protected phosphate together with a balance of nitrate and ammonia N and immediately available boron in the seedbed as a specialist starter fertiliser. It also underlines the contribution lambda-cyhalothrin can make when used at the best time – crop emergence.”

Putting these elements together, Colin points to results from the latest Throws Farm trials with one of the fastest developing OSR varieties available (DK Expedient) sown at two seed rates with 12 different establishment programmes and three sets of drilling conditions.

Averaged across the cultivation methods and seed rates, the recorded damage levels clearly demonstrate the value of stacking the controls in exactly the same way as black-grass management.

As the package is built from a relatively poor nurse treatment crop at one end of the scale to a decent companion crop plus specialist starter fertiliser and early pyrethroid spray programme at the other, so flea beetle damage declined from an average of almost 25% to virtually zero (Figure 2). 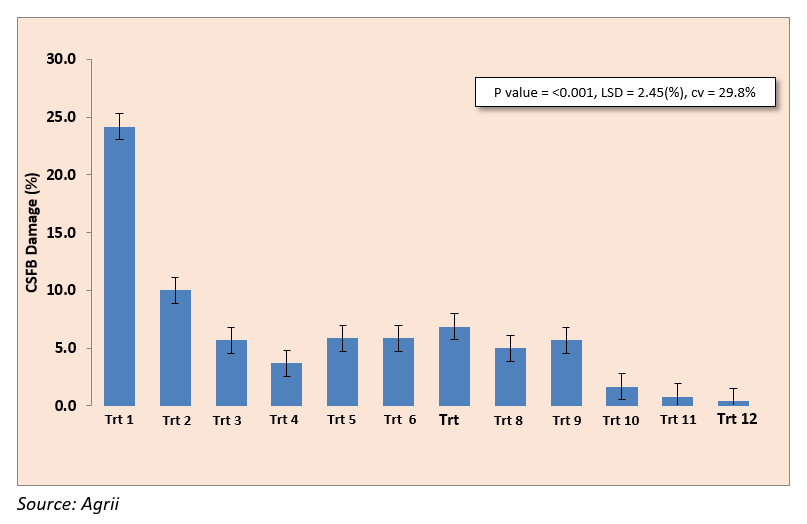 “This says it all,” he concludes. “Unless you are faced with too little moisture or your recent crop experience suggests the pest pressure is likely to be too high – in which case you shouldn’t be sowing OSR – you can beat the beetle. And you can do so very economically too.  But only if you are willing and able to give it enough care and attention with the right pieces of the cultural control jigsaw for your own conditions.”