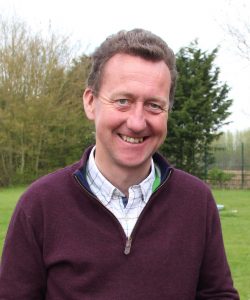 With advice from agronomist, Chris Letts, Tim Care is battling a club root problem that came out of nowhere three years ago and now affects 17% of his 400 ha arable business at Lower End Farm, Brafield-on-the-Green near Northampton.

A single isolated patch of infection was identified in one field in the spring of 2014; a patch that was noticeable for its poor wheat performance the previous season and initially put down to a previous soil levelling exercise.  Club root was obvious when plants were dug-up, however, and soil testing then showed the immediate area to be very acidic despite the field having no history of pH problems.

By the following season, infections were apparent in patches across five fields, with the worst field yielding just 2.9 t/ha compared to averages of up to 4.5 t/ha in nearby unaffected ground.

“What made matters worse, the previous crop of rape in the same field two years before gave us our best-ever spot yields at well over 5t/ha,” said Tim. “The soil is a nice deep loam with no drainage problems. Nothing – not even contractor’s machinery – had been brought into it and other affected fields in living memory either. They really are the last sort of places we’d ever have expected to see club root. So the problem would have been easy to miss if we hadn’t been on the look-out for it. 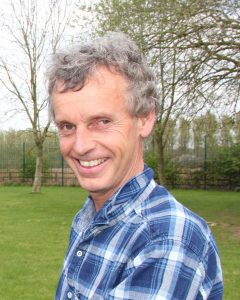 “As one of the first in our area to grow rape and having been alternating wheat and rape in our rotation for over 20 years, I suppose it was inevitable we’d hit the buffers at some stage. Especially so as, if I’m honest, my brother and I hadn’t been as diligent with the liming as we should have been, relying instead on five-yearly testing and variable application as part of a precision service built around grid-based soil mapping.

“Our move from ploughing to minimum tillage may not have helped either, concentrating any build-up of club root inoculum in the upper, warmer soil layers,” he reflected. “Nor would sowing in early to mid-August through the autocasting that has always worked well for us here –  not least in keeping black-grass seed near the surface and highly vulnerable to propyzamide.”

Although he’d never previously encountered it, club root had always been in the back of Tim Care’s mind. But now, like black-grass, it’s very much centre stage in his management.

To address it OSR growing at Lower End Farm has been reined back to one in every three or four years, depending on field risk. At the same time, soil testing and liming have been stepped-up, drainage efforts redoubled and varieties with club root resistance grown in areas with known problems.

In these areas the Cares are delaying their sowing until later on in August after later maturing wheat crops, although this is the peak season for flea beetle.  They’re also prioritising vigorous rape varieties across the farm to counter any problem areas yet to become apparent. 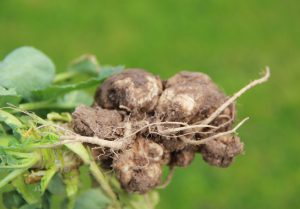 “Like black-grass here, we’ve been able to nip club root problems firmly in the bud by spotting them early and taking concerted action to address them,” reported Chris. “Driven by the black-grass imperative, a good measure of rotational ploughing and spring cropping should definitely be helping on the club root front too.

“Winter OSR remains the most profitable crop after first wheat for most of my growers. So, just 120 ha of winter rape a year here rather than the 200 ha of the recent past will have an obvious impact on margins. Having said that,  just like black-grass, it’s a matter of making short term compromises for long-term sustainability – a delicate balancing act.

“Club root is a growing challenge for many who may seldom, if ever, have experienced the problem before. As a soil-borne disease it’s almost certainly a threat we can never completely eliminate. So it’s important we take time to understand it, care to keep a close eye open for it and use all the cultural weapons at our disposal to keep firmly on top of it,” Chris Letts stressed.

“In particular, I believe there’s no substitute for getting out into the field and testing widely for any areas of acidity; especially areas where crop performance has been obviously falling below the field average. And everyone should be digging-up OSR plants that look to be suffering to check for clubroot as well as other tell-tale signs of soil problems.

“Keeping up with liming is an obvious essential, as is improving any areas of poor drainage and the use of resistant varieties wherever appropriate.

“I’m happy to say that an extra year or two between rapes in the Lower End Farm rotation is already paying dividends in yields,” observed Chris Letts.  “So this may go some way to making-up for the spanner club root has so clearly thrown in Tim’s long-standing rape-growing works.”

Recommended Cultural Controls for Areas at Risk from Club Root