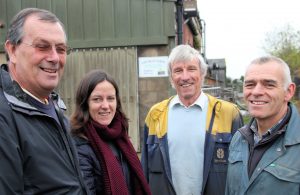 Proof that you don’t have to become larger and larger or more and more specialised to be sustainable in modern farming comes in the form of a 160 ha Norfolk dairy and arable business achieving growing success.

Despite a scale that many would consider insufficient to support a single family, Church and Beck Farms in Frettenham just to the north of Norwich provide a living for no less than three as well as significant local employment. What’s more, the Norton families plan to bring another generation into the business within the next five years and provide for senior partners, Philip and Rona as and when they wish to ‘retire’.

While this will almost certainly mean expanding the 55-cow dairy herd, for the time being their recipe for sustainability is based firmly on making the most of their current mix of closely-interlinked enterprises supporting each other as much as spreading the business risk; a recipe that took them to the final of the Mixed Farmer of the Year in Farmers Weekly’s 2017 Awards.

Central to their success is close partnership working between all the family members, neighbouring farmers and trusted advisers like Agrii agronomist, Steve Sayce who has been working with them for more than 30 years.

“We’ve always been a mixed farm,” explained Philip Norton. “It makes things more complicated. But, as well as working closely with our community, Rona and I have long believed in having our eggs in several baskets; especially when these work as well for each other as ours do.

“Bedding our dairy cows on straw, for instance, gives us the continual supply of muck that makes all the difference to the productivity of our soils and adds extra value to our cropping.  It’s also invaluable to our nephew David and his wife, Ruth in ensuring the health and productivity of the 9500-litre average Brown Swiss herd they manage.  And it’s a great asset for our daughter, Emily in communicating the Nortons’ Dairy business she has developed around the idea of seriously pampered cows.”

With insufficient rainfall a constant worry, muck is particularly important in the Church Farm arable rotation. It supports heavy crops of sugar beet, solid yields from the late-sown Dickens that follows it and consistently good local craft brewing premiums from the Maris Otter also included in the rotation – all with very modest levels of fertilisation.

It’s equally appreciated here for the forage maize – grown in both the arable rotation and between silage leys – that forms a key element of the winter dairy ration.

If anything, it’s even more valuable on the poorer, more drought prone land at Beck Farm on the other side of the village where maize and winter rye are produced for local AD plants through Aylsham Growers along with Concerto spring barley for malting.

“We started with energy rye three years ago because we’d been growing maize after maize in many cases and were concerned about eyespot build-up,” explained Steve Sayce. “The Helltop has generally done us well. But brown rust really ate into its profitability last season and weed control can also be a costly challenge. So the jury is still out on whether we stick with it going forward.

“Around 35-40 tonnes/ha of muck applied each spring ahead of the sugar beet and maize makes a huge difference on both farms. Ploughed-in every two or three years – depending on the rotation – it keeps the soils in really good heart and gives them vital extra water-holding capacity. All of which allows us to produce at the least cost per tonne and risk.

“Switching to liquid nitrogen three years ago has made a major difference too,” he added. “It means even fertilisation right up to the crop edges in our relatively small fields and reliable crop  utilisation when it’s needed if the weather turns dry, as it can do very rapidly. Timeliness in this, as in all our crop protection, is crucial since consistent crop performance is as important as least cost production.”

Attention to Detail in Everything 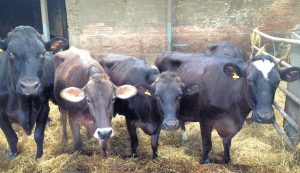 The close working partnership the Nortons have with the neighbours who do their spraying ensures their fertilisation and crop protection is always as well timed as possible. Equal priority is given to the timing of sugar beet and maize harvesting and muck spreading to minimise the risk of soil damage – about which Philip is very particular.

Similar attention to detail extends to David and Ruth’s management of the dairy herd at Church Farm.  The installation of one of the first robotic milkers in the county 10 years ago has been central to improvements which have resulted in most cows giving 10-11,000 litres and given impressive increases in grassland productivity.

“We started cross-breeding our then black and whites to Brown Swiss and Swedish Reds to give us hardier, more durable, lower maintenance cows about 15 years ago,” David recalled. “Since putting in the robot we’ve been concentrating on Brown Swiss breeding for udders that are much more suitable for the machine. The bull calves also generate a reasonable extra income for us while contributing to the success of the neighbouring farm which rears and finishes them.

“Not having to milk twice a day has enabled us to devote much more time to managing the cows in general and their grazing, in particular.  We now give them access to fresh grass every eight hours throughout the grazing season on a paddock system, using a rising plate meter to monitor grass growth every week. Having our own silaging kit means we have complete flexibility to shut-up paddocks and divert the grass to the clamp whenever the growth gets ahead of the cows.
“Knowing we can rely on a decent crop of forage maize is fantastic in taking the pressure off our grass silage-making so we can concentrate on quality rather than worrying about quantity. Having said that,  renewing our pastures every 3-5 years and managing them much better these days means we’ve been able to build-up a big surplus of forage. This is allowing us to put more land into energy maize this coming spring to increase earnings from the AD market.” 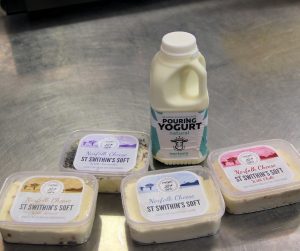 Alongside their nicely dove-tailed food and energy crop production and dairying enterprises, Nortons’ Dairy is giving the family an increasingly valuable extra string to their farming bow.

Since returning to the farm in 2006, Emily has worked with Ruth to develop the business from a selling a limited amount of liquid milk locally into a thriving dairy processor marketing multiple-award winning soft cheeses and slow-matured yoghurt further afield alongside fresh milk, cream and butter to local doorstep rounds and small independent retailers.

“It was only when I was studying for my Masters in Sustainable Agriculture that I began to appreciate just how sustainable our family business really was,” she said. “But to continue to be so and support further family members, I also came to realise we’d have to diversify beyond the holiday, residential and commercial lets we’d also been running.

“We were producing top quality milk in a way that had particular public appeal. So instead of selling it all to Arla, we moved to a split contract to develop our own direct sales.  With limited potential to grow the liquid market we started soft cheese-making in 2011 after I attended a specialist course and were rewarded with two gold medals in the 2012 British Cheese Awards.”

From this base, Nortons’ Dairy has grown to utilise around a third of the herd’s milk and employ eight part-time staff, extending both the range and the reach of its soft cheeses. In 2016 the family added a novel pourable yoghurt which is attracting a growing following, and last year the business took a coveted Best in Category title at the British Cheese Awards.

“We’re still small-scale but the demand we’re seeing for our offering of tasty, environmentally-sustainable dairy products from seriously pampered cows means we’ve lots of room to grow,” she pointed out. “We provide the dairy herd with an attractive milk price which has far less volatility than the external market while generating another livelihood for the family.

“Along with the robotic milker, our cheese-making is a great extra attraction for the school and group visits we have long run as part of our community involvement. And, of course, it does no harm for the wider awareness of our products.”

“It’s good to see a farm of our size can still offer long-term sustainability for a growing family,” concluded Philip Norton. “It just shows what can be done by working closely together; ensuring that everything we do complements everything else; maintaining strong partnership with neighbours and advisers; and having the courage and flexibility to explore and take-on new ideas and opportunities.