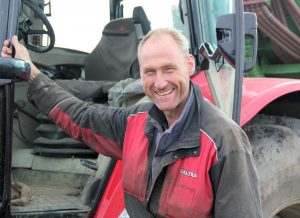 Taking on more land is always a challenge. But it becomes particularly challenging when you’re almost tripling your arable area, the extra land is much more demanding than your own, you farm without any permanent staff, and you’ve moved away from spring cropping.

So it’s not surprising that time is one of Andrew Aitken’s most limiting resources at Percival Farm, Buckhaven near Kirkcaldy on the Fife coast. Nor that managing it and risk as effectively as possible with Agrii agronomist, Donald Hay are his Number One priorities. All the more so since the 230 ha of heavy ground added to his family’s established 130 ha of cropping on a five year contract from 2015 is unforgiving if not managed to a very tight schedule.

“Timeliness is more critical than ever for us these days,” insisted Andrew who is responsible for the arable side of the third generation family tenancy while his brother, John manages the suckler beef business. “The new ground at Newton Farm, in particular, has to be drilled-up by the end of the second week in October and the combination of its clay content and the amount of rain we get means spray days are almost always limited. The difference between success and failure can often be just a few hours.

“Because we do all the work ourselves, John and I rely heavily on the strong partnerships we have with our landlord, Wemyss Estates;  key suppliers and contractors like Agrii; machinery specialists like Sellars; good neighbours like the Lairds; and, above all, Donald Hay to ensure we get everything done on time.

“Donald knows our farm as well as we do. He and I work closely together in planning our cropping, selecting varieties and managing them throughout the season. As well as making sure we have the right inputs precisely when we need them, he’s our link with Agrii’s dependable mobile seed processing and contract spraying services. And, increasingly, he’s helping us build extra precision into our liming, fertilisation and sowing based on SoilQuest mapping.

“We simply could not do what we are doing without him and the other members of our ‘extended’ farm team.” 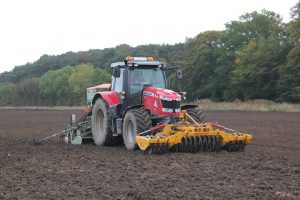 To make the most of its potential, Andrew and Donald are progressively replacing the new land’s long-standing continuous wheat-based regime with the successful five year winter crop rotation they’ve developed across the main tenanted holding.

While continuous wheat had worked well at Newton Farm in the past, growing problems were being encountered with root and stem-based diseases before the Aitkens took the land on. At the same time, reliably sowing the best part of 300 ha of winter wheat within the very narrow drilling window available would clearly have been impossible with their preferred plough-based establishment regime.

“We have to have a rotation that spreads our autumn workload, in particular,” Andrew Aitken explained. “We used to grow a lot of spring barley. Much of our land is well-suited to it and we’re barely half a mile from the nearest distillery. But when we got just £75/t for our quality malting crop in 2007 we decided we’d never again leave ourselves so exposed to this market. Instead, we’ve developed winter oats as a really good alternative. Most of our crop earned £130/t last year through the GrainCo pool and it’s a true wheat break.

“So now we have a winter rape/winter wheat/winter oats/winter wheat/winter barley rotation that gives us two first wheats but only one oilseed rape every five years. This is a great balance for both our management and marketing. It also provides barley straw for the beef and the opportunity to get a good application of FYM onto around 10 ha of stubbles every year. What’s more, it offers a sequence of sowing from rape in late-August through barley and oats to wheat in early October we can cope with.

“Moving to minimum tillage would certainly save on precious autumn time,” noted Donald Hay. “But any such savings would be more than outweighed by the extra crop protection costs required, not to mention poorer crops and greater risk of crop failure. 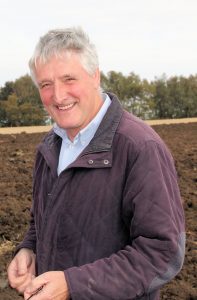 “Poor crops and greater risk are things the family cannot afford when they need to generate sufficient returns to cover costs and pay the rent every year. That’s why we grow consistently performing wheats like Istabraq and Myriad, barleys like Glacier and Tower, oats like Gerald  and OSR varieties like Anastasia and Mendel.

“It’s also why we prioritise sowing into warm soil at a consistent depth and with good seed-to-soil contact to ensure the crops get the best possible start. This and essential weatherproofing is just what Andrew achieves by running his power harrow/drill combination and packer roller right behind the plough and press. The packer is especially essential on the heavier ground as any rain compacts the soil surface like concrete if it’s rolled.

“We then go in with a decent pre-em within 48 hours of drilling all our cereals,” he added. “Thankfully, we don’t have any black-grass. But rough stalked meadow grass is a real nightmare and we’ve learnt just how costly failing to get on top of it from the start can be. Using Agrii’s high capacity, low ground pressure Agrifac sprayer, this can be done very cost-effectively while Andrew cracks on with the drilling.

“Avoiding early sowing to minimise root disease development in the wheat means we rarely need to use an insecticide. It also helps us manage the Septoria and mildew that can be pretty problematic. However, we make a point of getting a decent T0 on if we can travel, and use SDHIs at both T1 and T2 to keep well-ahead of any disease development. With far less curative activity these days it’s too risky not to. Again, backing-up to Andrew’s own sprayer with contract spraying ensures all our timings are as spot on as possible to keep costs down as well as performance up.”

Despite the extra pressures of the much larger acreage in a far-from-ideal season, the first harvest from the Aitkens’ new, much more challenging ground last season was especially encouraging.

Winter wheat, barley and oats were all well up to budget at 9.3 t/ha, 8.6 t/ha and 7.4 t/ha respectively to deliver very acceptable margins. And with the first 1st wheat and oilseed rape for many years going into Newton Farm this autumn, Andrew and Donald are looking to push their wheat output to a consistent 10t/ha and OSR to comfortably over 4t/ha.

“This is the sort of performance we want to keep costs per tonne at the level we need to be sustainable,” pointed out Andrew who is a member of the AHDB Fife Monitor Farm’s management group.

“At a current £98/t, feed barley certainly isn’t making the contribution we’d like it to. But we’re prepared to take the hit so we can grow good crops of rape, which in turn are important as a reliable break from and good entry for wheat. We have to look at things in the round.

“While our tight management recipe is paying the bills OK, I have no doubt that we must look to far greater co-operation with other growers for the most efficient use of labour and machinery as well as the closest possible partnerships with suppliers we value and trust to support us,” he concluded.”