Together, the Moderski family’s KAM Farming and Yuill Farms have seriously raised their arable performance sights near Friar Waddon just outside Weymouth. This follows a fresh, thoroughly integrated approach to agronomy with Agrii that delivered the best wheat harvest in 28 years of contract farming the 1400-acre holding.

As well as switching from mainly feed to 100% milling varieties last autumn with a completely new agronomy team, Kris, his wife Ann, son Mark and their principals set out to push the wheat average to a historic high of 10 t/ha. 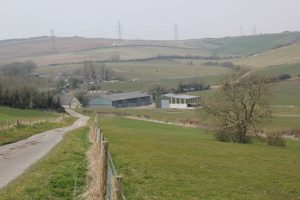 The Moderskis moved to Dorset in 1988 having developed a successful East Sussex contract farming and spraying business alongside a 150-acre family dairy farm from the ‘Seventies.

Around the core of their contract with Yuill Farms, they have since built KAM Farming into a mixed arable, dairy and contracting enterprise extending to some 2000 acres in three main holdings, a top-performing 350-cow Holstein herd and 1000 acres of stubble-to-stubble contracts.

With a mixture of two thirds feed and one third milling wheats averaging around 9.5t/ha, winter rape 3.7 t/ha and spring barley 6 t/ha from a range of chalk and clay cap to very heavy wet clay ground, Kris and Ann were by no means unhappy with the arable performance. But they and Mark who has taken on the business’ main cropping responsibility were convinced they could do better – and, indeed, needed to with mounting market pressures. So, in the summer of 2014 they re-organised their crop management completely, taking on an Agrii team led by agronomist Todd Jex and seed manager, Dorian Jones. 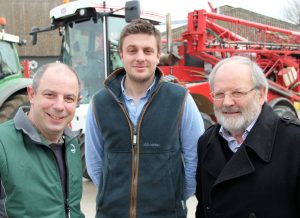 Things weren’t going badly, but we felt we had plenty of room for improvement,” recalled Kris. “Particularly Mark, as he took on responsibility for the arable crops and sought to apply the latest technologies and agronomic understanding to improve performance in the face of some serious issues with resistant ryegrass.

“The past 18 months have been a revelation,” he said. “Todd and Mark walk the fields together every week, decide what each of the crops need, and the inputs they agree upon arrive the following day for the most timely crop management. They work closely with Dorian to select varieties best suited to the conditions and requirements, and are supported by what has to be the best R&D team in the business.

“The results speak for themselves. Yes, the weather was in our favour last year. Even so, I have to say we were overwhelmed by the wheat yields; especially so following the move to milling varieties alone. The winter OSR yields were encouragingly up at an average 4 t/ha too. As were the spring barleys at 7.4 t/ha.”

As important to the team as last year’s record harvest was the fact that, averaging 12.35 t/ha, the Yuill Farms’ milling wheats on heavy clay were the best performing in this category across Agrii’s entire Maximising Arable Performance (MAP) benchmarking group of 70+ southern county growers. Despite being pushed up by the need to control resistant ryegrass and major slug problems, variable costs averaged less than £50/t to deliver an average gross margin comfortably over £1000/ha at standard prices.

“This really shows we’re getting things right,” stressed Mark. “Todd, Dorian and the specialists behind them have been giving us just the advice and support we want. With the sort of yielding ability and Septoria resistance the best Group 1 varieties have these days, switching entirely to milling wheats has proved an excellent decision. As has delaying wheat drilling until late September at the earliest to reduce ryegrass, disease and BYDV control pressures; and employing the particular micro-nutrient regime that has given such good results in Agrii trials.

“The extra information we’re getting from the company’s research as well as the benchmarking is invaluable too,” he continued. “Having had the whole farm SoilQuest mapped in the past year, we’re also making great progress in improving the precision of P&K applications and liming. Variable rate nitrogen using satellite imagery was extremely useful last season, reducing fertiliser usage, evening-up crops and allowing us to make the most of the FYM and slurry from the dairy herd.

“What’s really made the difference, though, is putting all these elements together with the best possible co-ordination in a way which suits the ground and equipment.” 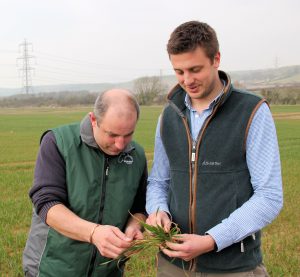 Amongst other agronomic improvements currently being made at Yuill Farms is the introduction of beans on heavy ground to extend the winter OSR rotation from one year in three to one in four or five while maintaining a break that allows good ryegrass control with propyzamide. A total of 80 ha – 19 ha of the winter variety, Tundra and 61 ha of spring Vertigo because the weather prevented further winter drilling – have gone in this season. Autumn cover cropping is also planned ahead of spring sowing to improve soil structure, drainage and organic matter levels.

“Following on from our experience at Yuill Farms, we’re extending the integrated agronomy recipe across our entire cropping operation this season,” explained Mark. “We’ll be making much wider use of precision here, together with a whole range of other opportunities for further improvement.

“Working with Agrii has been a real eye-opener for us in so many ways, “Kris Moderski concluded. “Knowing what we can achieve if the conditions are right, I see no reason why we can’t target a good 11t/ha on a regular basis from the farm’s milling wheats now.