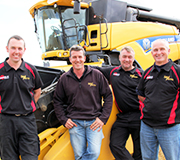 Rod Smith and his Beal Farm team near Berwick-on-Tweed have every reason to be pleased with the handsome rewards gained from their yield-pushing attention to detail, fine-tuned by a quality Master Seeds seed wheat growing recipe.

Across their 230 ha of first and second wheats in 2014, they averaged almost exactly 12t/ha, with seed crops of Leeds after vining peas delivering especially impressively. One central 14 ha field block, indeed, produced a good 17 t/ha – a performance that would have smashed New Zealand’s 15.6 t/ha world record had it been verified. 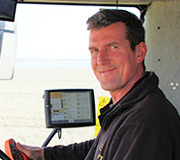 “Yield is the key to profitability and we know our system can deliver really big yields, so we and our Agrii agronomist, Eric Horsburgh have always pushed for them,” explained Rod who farms the 400 ha family holding in partnership with his father James and wife, Vicky.

“Our first wheats after peas generally do the best part of 5t/acre (12 t/ha). Seven years ago we brought in over 6t/acre (15 t/ha) from a field of Viscount, with a 10-15 acre block doing over 7.5t/acre (19t/ha). And within this year’s top-performing block of Leeds we recorded spikes of 8.5t/acre (21t/ha) across 4 ha. This certainly took some combining even with our high capacity, twin rotor New Holland.

“Soil mapping and variable rate P & K have really helped cut field variations and improve our overall performance in recent years,” he reported. “As has the agronomic discipline of growing for quality seed markets. It certainly focuses the mind on first class husbandry throughout the crop’s life and across the rotation.” 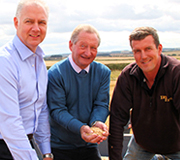 As well as the attractive premium – especially appreciated at current wheat market prices – the value of quality seed wheat growing is crystal clear in the final performance of the main Master Seeds crop of Leeds grown at Beal Farm last season for seed manager, Rodger Shirreff.

The 28 ha field averaged 12.3 t/ha for a total input cost of around £600. At a feed wheat price of £120/t this represents a gross margin of more than £1000/ha before accounting for any extra value from the timely use of Agrii marketing tools.

“As usual, we didn’t stint on inputs with the crop,” said Eric Horsburgh. “But we only used what was needed on a thoroughly prescriptive basis. Thankfully, grass weeds aren’t a major problem here so we only employed a modest autumn herbicide programme targeted primarily at AMG, plus a timely late spring application of fluroxypyr to deal with cleavers, in particular.

“Disease control and plant growth regulation were major challenges in a growthy season with almost no winter to speak of. So our spring and summer spray programme was pretty intensive, amounting to six fungicide and four PGR applications.

“We chose Leeds for its particular northern-yielding abilities at the top of the soft Group 4 tree However, isn’t the most yellow rust resistant variety and mid-September sowing left it fairly exposed in a mild winter with so much of the disease around well before Christmas. Under these circumstances the fluquinconazole seed dressing we employed at T(-1) proved invaluable in holding the infections well at bay through to the spring.” 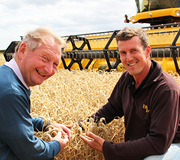 The Beal Farm team started their spring spray programme with fenpropimorph in early March to tackle a level of mildew Eric didn’t want to leave until T0, adding the early PGR, Meteor together with Nutriphite PGA to encourage tillering and rooting.

This was followed by a triazole-based T0 mix plus a second PGR and foliar manganese, copper and zinc at the end of the month. A robust combination of SDHI, strobilurin and triazole plus the main PGR was applied at T1 in late April, a final PGR with foliar potassium going on in early May and an SDHI, triazole and folpet T2 mix in mid-May with extra foliar magnesium.

“We were intending to complete the programme with a mixed triazole T3 ear wash in early June but, with the weather becoming so changeable, we added an extra early July dose of tebuconazole as insurance against the fusarium we need to keep out of seed crops at all costs,” Eric added.

“Little and often PGRs ensured we kept the variety standing well despite the storms that are a fact of life on the exposed site, 240 kg/ha of applied N and relatively high N-Mins courtesy of the heavy ground and preceding pea crop. As well as nice clean leaves and stems through to maturity, the combination of variety and agronomy also gave us ear counts of almost 1000/m2 in June to set up a really good crop.”

Along with enough fertiliser nitrogen balanced with the right amount of sulphur, P and K indices across the entire SoilQuest-mapped field comfortably above 2 and trace elements to overcome specific imbalances revealed in soil and tissue testing, sufficient soil care has been a further vital ingredient in Beal Farm’s Master Seeds growing success.

The relatively simple farm rotation – vining peas, two wheats, spring barley and two wheats before going back to peas – enables the team to plough every three years between successive min-tillings ahead of the wheats.

“This means we work our ground at different depths on a regular basis to cycle nutrients, prevent cultivation pans and fully incorporate the 500t of muck we bring in each year in a barley straw swap with neighbours,” Rod Smith pointed out. “Peas give us a fantastic fertility bonus too as well as a nice clean and early first wheat entry. And we chop and incorporate most of our wheat straw as part of our determined effort to build organic matter and improve soil structure.

“Effective sub-soiling with our Sumo is essential on our heavy ground. As is the patience to only work it when conditions are right. At the same time, Alan Fairbairn, Stephen Pringle, Stuart Ord and I do everything we can to avoid compaction with the way we set up and operate every single piece of machinery.

“Over the years we’ve developed a system that suits our ground and conditions well,” concluded Rod Smith. “We’ve learnt a lot from Agrii over this time. This is proving invaluable in helping us maximise the performance and profitability of our entire cropping. With their help we’re planning to raise our wheat production game still further in the years ahead. Our entire team is extremely excited about what we can do. Who knows, we may even be able to reclaim the official world wheat record from the Kiwis before long – and without irrigation either!”