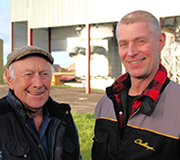 Increasing precision in their agronomy is allowing Tom and Richard Wood to build on their long-standing West Midlands quality wheat growing record, boosting average yields by around 0.5t/ha and significantly reducing costs per tonne.

Specialising in bread wheat for more than 30 years, the father & son partnership and their
Agrii agronomist, David Vine have been progressively introducing precision technologies across their 400 ha business for the past four years. Not that performance has ever really been lacking in the past, as seven victories in the last 10 years of the hard-fought Bromsgrove & District Farmers Club Wheat Growing Championship clearly underline.

“We’ve always made the full milling specification with our Group 1s and were averaging around 10t t/ha from first and 8t/ha from second wheats in our wheat/wheat/rape rotation,” Richard explained. “But our performance had definitely plateau’d and we were looking to give it an extra edge. At the same time, black-grass was beginning to rear its ugly head in places and we had a suspicion that P levels might be becoming limiting – not least because take-all was becoming an issue in places.

“Precision agronomy has definitely helped us tackle these challenges. Last year we averaged 10.1 t/ha over the weighbridge across our first and second wheats while continuing to make the full milling spec. We also brought in an average 5t/ha from our winter OSR. So we’re clearly on the right track.”

Fertiliser holidays are unknown at Walmer Farm. And regular soil sampling invariably showed P&K indices of 2 in most fields. Despite this the team was concerned that the maximum 58 kg/ha of phosphate and potash they could apply each year in their all-liquid fertiliser regime was not sufficiently making up for an annual offtake increased by selling all the straw to local livestock farms; especially so with soils varying from medium loam to heavy clay with areas ‘bottomless’ peat and extensive marl out-cropping. 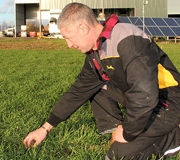 To get an accurate assessment of actual variations in soil type and P&K status an 80 ha block of four fields was SoilQuest conductivity scanned in 2009. This revealed 20-30% of many fields with P & K indices of 1, while other parts were indexing 3 or more.

“The SoilQuesting really highlighted the inadequacies of traditional field soil sampling and arbitrary grid-based mapping systems,” stressed David Vine. “In each of these cases you’re analysing amalgamated samples that can come from a range of soil types. So the result you get is an average which, as we found, can easily hide very big variations across fields that may have a major impact on performance.

“The secret of avoiding this is to divide your fields into management zones that accurate Veris scanning at two depths shows are of the same soil type, then sample and analyse these individually to determine their nutrient status. “

Having discovered the true extent of their actual soil variations, the Woods invested in an Amazone spreader with variable rate capability in 2010. At the same time, they had Agrii scan and soil sample the rest of the farm. Since then they’ve cut all P&K from their liquid fertiliser regime and been variably applying both – phosphate each autumn and potash each spring – automatically to SoilQuest management zones via a Patchwork BlackBox GPS guidance system. 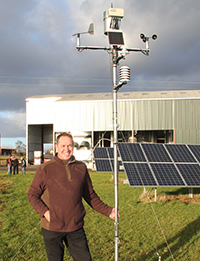 “We’ve already more than paid for the mapping and sampling by the saving over the blanket P&K dressing we’d otherwise have needed,” Richard Wood pointed out. “More importantly, re-sampling last autumn (2014) showed our indices were consistently 2s and 3s across every zone. So, we’ve clearly been able to concentrate our applications where they’re needed rather than waste them where they aren’t.

“Seeing how well the management zones reflected our own knowledge of the fields – and old field boundaries, in particular – gave us the faith to take the next step into precision by moving to variable seed rates for all our wheat in 2012.

“Every season, David and I now sit down with the field maps and create our seed plans, based on an average sowing rate for the conditions and sowing date, with management zone rates adjusted up or down by up to 20% . On top of the SoilQuest zones we overlay our current field-by-field experience of both black-grass and slug infestations so we also account for these variables in our seed rates.

“Variable P&K applications have been valuable, but variable seed rates have been our biggest step forward,” reported Richard. “They’ve really helped ensure more consistent establishment. Automatically upping the seed rate on difficult areas of each field and where we most need to out-compete slugs and black-grass is giving us far more even and uniform crops with none of those tell-tale gappy patches we used to think were inevitable.”

“It’s all about getting back to our primary drawing board – the soil – understanding it, putting our inputs where they’ll do most good, and maintaining enough flexibility to work with both the soil and weather at all times,” insisted David Vine.

“Our ability to do this has been massively improved by making use of the GateKeeper Web App system as a fundamental part of the move into precision. Through it Richard’s able to download all my recommendations direct to his iPad, take them with him to the field and automatically implement them from the cab. At the end of the day, he can then download all the operational records direct to his management computer; all without any paper to get muddled up or extra inputting to go wrong.”

Running everything themselves with only casual labour to help at harvest time makes this sort of technology – alongside high capacity equipment operating on RTK satellite navigation – essential for Richard and Tom. Most importantly, it allows them to achieve the timeliness in their agronomy that David Vine has always seen as the most vital ingredient for cropping success.

Amongst other things, the technology also enables Richard to set up virtual headlands so he can drill and fertilise them last rather than first these days as a further aid to improving establishment and reducing liquid fertiliser scorch. 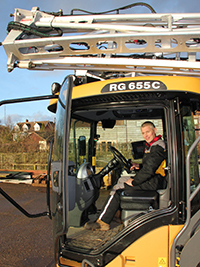 Richard and David are keen to put the MetQuest weather station installed earlier in 2014 to increasingly good use in providing information on their other main environmental variable – alongside soil. As well as helping their spray planning with more accurate local forecasting through Agrii’s specialist on-line ‘dashboard’ and providing the best local records to improve future performance through a better understanding of specific site constraints, they see the growing opportunities the system offers for disease and pest forecasting as especially exciting.

“For us precision agronomy is all about combining our understanding of the farm with David’s expertise and technical know-how in targeting our inputs better and better in both space and time to boost yields and reduce costs per tonne,” Richard concluded. “The more we take advantage of the precision technologies we consider right for us, the more benefits we are finding from them. And they’re making the closer working with our agronomist we consider vital to our future success so much easier and more productive.”