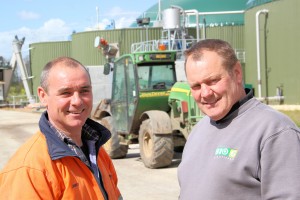 Just under a year on from the commissioning of one of the first major farm anaerobic digestion plants in West Yorkshire and 15 years after they first set out to develop it, brothers Charlie and Alaric Booth are re-learning the art of cattle feeding at Smeathalls Farm, Knottingley.

What’s more, with four new farm plants currently being developed in the immediate vicinity and hundreds more across the UK, their experience and the trial work being undertaken with Agrii on the Brotherton iFarm they host will be invaluable in ensuring farmers make the very most of the AD opportunity.

“We last had cattle on the farm in the late ‘Eighties,” explained Alaric. “Since then our
400 acre (160 ha) home farm has been entirely stock free, although we continued to grow a good bit of grass for horse hay while concentrating on combinable cropping. With wheat prices on the floor at barely £60 in the early 2000s we wanted to base our farming on something with far better and more stable long-term prospects. So we started looking at AD.

“Originally we wanted to fund and build a plant ourselves. But the technology was limited. Such UK experience as there was did little to inspire confidence. The quoted costs of a connection to the grid alone were astronomical. And we couldn’t find any reasonable financial or technical support.

“Ironically, by the time we’d found what we wanted and agreed our ‘20-year service with an option to buy’ deal with Qila Energy wheat prices were up to around £200/t. But it was this very volatility, coupled with the escalating costs of combinable crop production, we were keen to escape from: something recent market developments have certainly underlined.”

So it was that the £3 million+, 499kWe two-stage Snow Leopard plant designed to run from 300 acres (120 ha) of home-grown feedstock came into operation at Smeathalls Farm last September; it’s four impressive vessels all connected together by a complex pumping and control system, piping methane to a massive generator.

Getting the feeding right 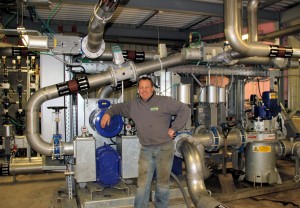 Although it can run on a range of feedstocks from wholecrop cereals through maize and grass silages to energy beet, cereal and OSR straw – not to mention cattle, poultry and pig manure – the Booth Brothers haven’t found getting the feed mix plain sailing by any stretch of the imagination. Nor have they found it easy marrying what their land can best and most economically produce with the digestor’s particular appetite !

“With two stages, four tanks and a reliance on bugs, it’s just like a cow’s stomach,” explained Charlie. “So just like a cow you have to feed it the right diet to keep it producing efficiently. And, just like a cow, it can get sick and cause you all sorts of problems if you don’t keep feeding it right.

“Being designed for Germany, the plant is happiest living on maize –  which we can’t grow on most of our land up here. We originally understood we could use up to 70% grass silage – which we can grow very well – with maize silage. This would have been ideal. So we put in 200 acres of two year leys to supply it. Only to find that too much grass caused the whole thing to locked-up solid, shutting down completely and taking a lot of effort to reinstate.

“Having got this particular T-shirt, with Philip Marr, our agronomist Sam Patchett and the Agrii team we’ve since been experimenting with a range of feedstocks matched to our land. At the moment we’re running on around 60% energy beet, 35% grass silage and 5% chicken litter (for the extra nitrogen), topping the plant up every couple of days. Touch wood, things seem to be running well with a good steady output of the right gas mix.”

With only 120-130 acres of land light enough to grow either beet or maize, however, this mix is far from ideal for the farm. So it is being adapted over the coming year with the inclusion  both wholecrop and forage rye. 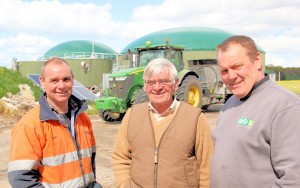 “Winter rye has proved valuable for AD further south, so we’ve grown 150 acres on the farm’s heaviest ground this season, harvesting over 20t/acre it at the milky ripe stage in early July,” said Philip Marr. “That’s at least as much as several cuts of grass – not to mention at a lower cost/tonne and with a methane value equivalent to maize.

“This year we’re growing 40 acres of energy beet and 86 acres of maize silage on the light land. At the same time, we’re experimenting with double cropping on just under half the maize ground. We put in forage rye last autumn and harvested around 10t/acre at the end of April, just in time to drill the maize. Harvesting the rye this early means we’ve had to sacrifice some of its yield, just as we’ll get less maize silage from not drilling until mid-May. But two crops should give us more energy from the year’s cropping than we would have got from wholecrop rye or maize alone.

“There’s a lot we need to learn about both growing and using rye and beet as well as maize for energy production,” Philip Marr stressed. “For instance, our iFarm trial work is showing big differences in the speed of development of rye varieties, the consistency of later-maturing maize varieties and the tare content of beet varieties, all of which can make a huge difference to crop productivity.

“We’ve also got to understand how best to integrate energy crops into the rotation to fit other requirements, like black-grass control; how to produce them as economically as possible within existing resources and workloads; and where and how to most effectively utilise the AD digestate  that can be a valuable fertiliser but carries considerable handling and spreading costs.

“Far more people putting-up plants today need to really think through these and other agronomic and  management implications that, I have no doubt, will be the difference between long-term success and failure of farm AD.” 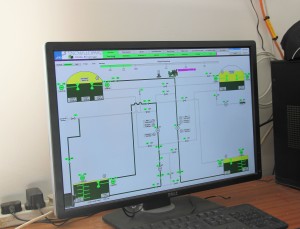 While anaerobic digestion has been a steep and often frustrating learning curve for the Booth brothers at Smeathalls Farm and remains very much a work in progress, Charlie and Alaric are hugely encouraged by the progress they’ve made in their first year.

Despite a series of teething problems restricting operation and efficiency, in its first nine months their plant delivered the best part of 1.5 million KWh to the electricity grid from only 3000 t of feedstock. So it looks like being even more efficient than they were originally expecting.