Countering serious challenges from Septoria tritici, slugs and brome with the most integrated and sustainable management is enabling Eastbury Estates to step-up wheat performance progress at Tarrant Gunville near Blandford in Dorset.

Since taking on the management of his family’s 400 arable hectares at the southern end of Cranborne Chase in the early ‘Eighties, Jim Farquharson has pushed wheat yields from around 7t/ha to just over 10t/ha. Encouraged by the Estates’ best-ever harvest last season, he and Agrii agronomist, Todd Jex have upped the pace of their improvement efforts, setting 11-12t/ha as a realistic milling wheat objective. 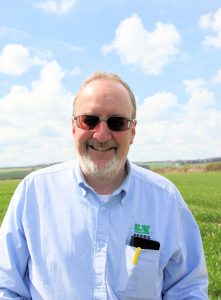 “We’ve long concentrated on milling varieties for our yield-limited downland,” explained Jim. “The chalk acts as a great reservoir of moisture, but the loam to clay cap with flints everywhere is far from the most productive wheat ground and poses clear challenges for our management – not least in machinery and tyre wear!

“At the same time, we’re in a real septoria hot spot, slugs are invariably a problem after oilseed rape, and sterile brome has become a much bigger headache in recent years.

“To address these issues Todd and I have been extending our rotation to reduce the frequency of winter rape to one year in every four or five, improving our autumn stubble and drilling management, and growing the most septoria resistant and weed-competitive varieties. Alongside this, we’ve been working hard to increase both soil and crop health.”

The extent to which these efforts are paying-off is clear in a 2015 over-the-weighbridge harvest average of 12.76 t/ha of full Group 1 spec wheat across the business’ 145 ha of Crusoe, with the best field delivering fully 13.8 t/ha at a cost of less than £50/t.

The Eastbury Estates’ team is the first to accept that a relatively low disease season with a long, cool grain fill period played its part in this impressive achievement. Having said that, there can be no doubt that it would not have been possible without the determined focus placed on addressing the most important local performance limitations. 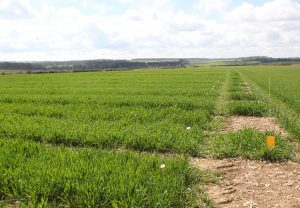 “More than anything else today, our improvement efforts have to be concentrated on where we can get the greatest bang for our buck,” stressed Todd Jex.

“In dealing with septoria we don’t want to grow a variety with a resistance score of less than a true 6.0. We don’t want to drill it too early or at too high a seed rate, and we need to manage our nutrition programme to maintain the healthiest possible plants and the most productive light-penetrating canopies. This gives our four spray fungicide programme the best chance of successfully countering the septoria shift while coping with inevitable weather variations.

“Less frequent rape crops are an important element in our battle with slugs,” he added. “As is repeated stubble-raking to kill adults and eggs, and effectively consolidated seedbeds to restrict pest movement and maximise early crop vigour. Well-targeted treatment with a maximum of two high quality, low dose metaldehyde pelletings followed by ferric phosphate, where necessary, is also vital in a catchment as sensitive as we have here.

“We allow sufficient time ahead of drilling for at least two stubble-rakings – each followed by glyphosate treatment – ahead of min till establishment for the best pre-drilling kill of sterile brome too. Wherever possible, we also choose varieties with good weed competition ratings from my colleagues’ Stow Longa research, and actively use the spring barley in the rotation for extra winter weed cleaning.”

The bulk of last season’s Crusoe at Eastbury Estates was sown in early October at 300 seeds/m2 with Deter. It received a flufenacet-based pre-em followed by a pyrethroid spray in late November to counter a high BYDV risk. Foliar manganese was also applied to boost rooting and tiller survival.

Not using a winter post-em gave space for a spring sulfonylurea treatment to hit any surviving brome and broadleaved weeds. High levels of early Septoria tritici necessitated a combination of tebuconazole and chlorothalonil at T0 with added micro-nutrients and a low temperature active PGR to further encourage rooting and even-up the tillers.

SDHIs were used at both T1 and T2 together with stacked and sequenced triazoles. A strobilurin was included at T1 for its value in remobilising stem-soluble carbohydrates as much as an extra mode of action against septoria, together with a combination of PGRs to shorten the internodes and thicken the stems, and targeted micro-nutrients.

Extra well-formulated micro-nutrients were also added to the T2 spray, and a T3 application of tebuconazole and prochloraz employed to counter ear diseases and late septoria.

“Our acute septoria risk and concentration on milling wheats means we can’t afford to let-up on disease control,” Jim Farquharson pointed out. “The treated and untreated plots of the large number of varieties we have here as an Agrii iFarm show us how important this invariably is, even with relatively resistant varieties and in generally low disease pressure seasons.

“Learning from the latest Agrii research, we’re supporting this with the best balanced micro- as well as macro-nutrition throughout the season, looking to secure healthier plants better able to tolerate infections for the best green leaf area persistence. This is especially important with the lock-up of key nutrients like manganese, zinc, boron and magnesium – not to mention phosphorus – on our high pH soils. 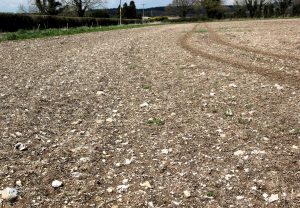 “Our wheat micro-nutrient bill quadrupled last year,” he reported. “But at only £20/ha, this is small price to pay for the sort of benefits being proven by the research. In addition to healthier, more stress-tolerant crops, it also means we make the most of our N, P, K and S applications. Last season, for instance, we only used 280 kg/ha of N, all told, for 13% protein, despite the dilution inevitable from the sort of yields we got.”

Having had the whole arable area SoilQuest conductivity scanned and already seen valuable benefits from variable N, P and K application, Jim and Todd are looking to make increased use of precision agronomy as part of their improvement plans.

Winter barley has already been included in the rotation to give a better entry for oilseed rape. Legumes are also now being grown to a greater extent to improve soil structure as well as capture nitrogen. Straw is increasingly being incorporated rather than baled and sold. And extra biosolids are being sought in a determined effort to increase organic matter levels.

In addition, the team is exploring the strategic use of cover cropping ahead of spring barley and the possibility of rotational ploughing within the long-standing min-till regime.

“My father always said there’s no shame in being second,” Jim Farquharson. “So Todd and I are taking a thoroughly open-minded approach, using the best available research and experience to inform our decision-making.

“Last season, for instance was the first time in more than 10 years that we’d grown winter barley. And both the Galation we grew on contract for seed and the feed Glacier did us proud.

“This season, we’ve moved from almost entirely Crusoe to 50% Crusoe, 50% Skyfall to keep our milling wheat eggs in more than one basket. We’re also growing a field of KWS Lili as a look-see and intend trying some RGT Illustrious on the same basis in the coming season.

“Our task now is to consolidate the gains we’ve made with our wheat so that it still delivers 11t/ha or more when the season isn’t as favourable as it was in 2015. Equally, we see considerable room for improvement with our winter rape and spring barley so our whole system delivers as well and consistently as it can. This is crucial at today’s sort of crop values.”