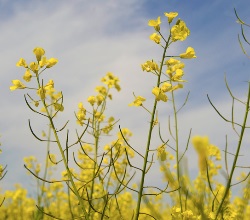 The wet start to January will have prevented growers from planting any late drilled winter wheat for much of the last month or so. For many this is has meant a confirmation of what land will be left to be drilled with spring crops. What options are there then?

Although spring barley premiums are not as attractive as they may have been in some years, they are likely to be attractive enough to encourage a crop of at least the size we have seen in years prior to the 2013 harvest. Propino is likely to be the top selling variety followed by Tipple Concerto with newer varieties such as Odyssey and Sanette attracting some interest. On the feed barley front there are a lot of varieties that will are providing competitive yields. Waggon, for a long time the feed market leader, is now challenged by varieties such as Rhyncostar with its much better Rhynchosporium resistance.

Millers have been positive about the qualities of Group 1 spring wheat Mulika but seem a bit more hesitant over the Group 2 and feed varieties. But there are yield advantages in varieties such as KWS Alderon, KWS Willow and Tybalt that make them a reasonable consideration.

The spring oat market does look fairly depressed at the moment with some pretty poor prices for conventional oats and some millers declining to take in further crops of spring oats at the moment. However, one alternative is naked oats. Lower yields but a very strong demand means contract prices are well in excess of wheat prices as opposed to a discount for the conventional oat crop. Buy-back details are available via your local agronomist.

Spring rape and linseed are likely to be back to more normal plantings. A new hybrid spring rape variety, Doktrin, is available this year alongside proven varieties such as the earlier maturing hybrid Belinda and the conventional, Heros. All spring rape seed sold by Agrii will have passed the Master Seeds Vigour Test. Linseed tends to fluctuate with the grain prices, and with a lot of crops the highest yielding varieties such as Juliet tend to have the later maturity. Earlier varieties such as GK Emma are a reasonable option where the most important aspect is the date of harvest rather than yield.

There are new varieties coming through on spring beans. But it is likely that well established varieties such as Fuego and Fury will take the lion’s share of the market. Peas on the other hand may be the one spring crop where seed could be tight. The crop has been at pretty low levels for a few years now but there are good premiums to be had and with newer varieties such as Daytona coming through with good colour retention then the prospect of achieving those premiums is high. Human consumption contracts are also available for varieties such Sakura and Kabuki and should be considered.