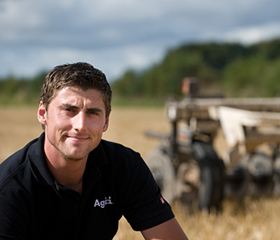 Following a trial on a block of land north of Colchester, it was decided to use the SoilQuest system right across the 1100 hectares of land farmed by the company. According to James the move to SoilQuest has led to more refined soil sampling and maps. While it is difficult to quantify the savings made by using it, he believes that the cost of SoilQuest has been recovered many times over.

As well as determining the optimum use of nutrients, James and Stuart Alexander, Agrii’s Precision Agronomy Manager, have worked on producing variable seed rate maps. The area is well-known for its resistant blackgrass population and variable seed rates provide another valuable tool in the James’ armoury for blackgrass control.

He says that they haven’t saved seed, but have ensured that is used where it most needs to be, with seed rates varying between 100kg/ha and 200kg/ha in the same field. In the coming season they will be moving the system onto oilseed rape with the aim of achieving better establishment. James says: “It is far more accurate than the farmer can ever be, so it will be a huge benefit to the crops and help to produce a consistent and reliable gross margin.”