At East Wryde Farm, consecutive wet winters and increasing black-grass issues have highlighted the importance of drainage and identified a need to fully refurbish the existing drainage infrastructure – a situation that has been repeated across many farms over the last couple of years.

Watch the full video of this case study (40 minutes):

Located on the edge of The Fens at Thorney in Cambridgeshire, East Wryde Farm is part owned and managed by Trumpington Estates. Although there is 81 ha of winter wheat this year, most of the farm is spring cropped, including 320 ha of spring wheat, 278 ha of forage maize for anaerobic digestion and cattle feed, 52 ha of grass silage and 54 ha of sugar beet. There are also 10 ha of game and wild bird cover and some 35 ha of grass margins in Countryside Stewardship alongside most of the ditches. Because of blackgrass issues, cabbage stem flea beetle and weed control challenges, oilseed rape has been dropped from the rotation this year, although it could return to the rotation in the future. Organic matter is returned to the farm both as cattle manure and digestate from neighbouring farms.

Discussions between Estate Manager David Knott and Agrii Regional Technical Advisor Will Foss resulted in the creation of a five-year plan to completely overhaul the farm’s drainage system, including re-profiling ditches and clearing land drains, with practical work getting underway at the start of January.

Four ditches maintained by the North Level Internal Drainage Board (IDB) divide the farm into rough management blocks. “The 230-ha block, which we are currently focusing on, is serviced by the Fish Fen Drain running west to east into the New Cut drain, which in turns flows into the Old Wryde Drain to the south of the farm,” explains Will. “The IDB provides clear ditches for the farm drainage system to run into. We have a system we can drain into and we have split the farm into four or five management blocks from a drainage point of view.”

Most of the field drains run in parallel to each other and straight to the ditches, avoiding the complications of herringbone layouts. The oldest recorded drainage schemes date from 1974 and consist of tile drains, with other later installations in the 70s and 80s, together with a few additions over the last 30 years. After reviewing the farm 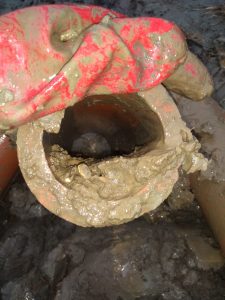 A close up of what the team are dealing with and clearing with the jetter – a silted tile drain.

’s drainage maps, the first task this winter has been to mark the location of the field drain outfalls, expose the outfall ends (most of which are fitted with concrete headwalls) and then clear the culverts joining the farm drainage ditches to the IDB ditches.

“Most of the culverts were very silted up and clearing them has allowed the ditches to flow freely,” says Will. “The farm ditches are due to be dug out and re-profiled. Whilst some of the drain outfalls sit well above the water level, due to undulations in the fields and the state of the farm ditches, many of them now sit below the water level. We have also located a number of un-mapped outfalls have also been located during the initial phase of the works, so there are obviously other drains in place too.” 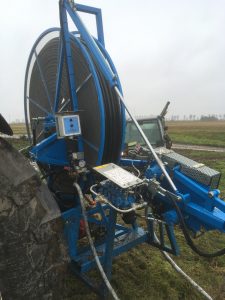 The jetter from the operator’s point of view

In early January, the farm took delivery of a new S-S Professional Drainjetter, manufactured in the Netherlands and supplied by Stowmarket-based Mitchell-Rowlands. The £20,000 machine has been specified with a number of optional features including a larger 600m hose reel, a second high-pressure hose for manual use with stubborn blockages, and a fully featured remote control for the arm and hose.

At East Wryde the smaller hose is fed in first to clear any blockages up to 100m from the outfall, followed by the main hose, which is pre-programmed to the length of the drain. The water intake is placed upstream in the ditch to avoid sucking in the dirtier water coming back out of the drain, and the arm is pinned in place at the outfall to avoid it getting pushed back if the hose encounters a blockage.

“One of the concerns is whether the tiles themselves have shifted under the weight of modern heavy machinery,” adds Will. “If we find a blockage, at first we don’t know whether it’s a tile that’s shifted or whether the drain has just silted up. A record is kept of every drain as its jetted with some requiring further remedial action. Thankfully, the majority were backfilled with stone which means most of them should still work well once they have been cleaned out with the drainjetter and the fields mole drained.”

In case the drainjetter encounters a more significant blockage, the farm has invested in a radio tracking device. This is screwed onto the end of the hose in place of the standard head and fed into the pipe. A handheld receiver then locates the signal broadcast from this head, allowing the location of the blockage to be found from the surface.

Will stresses that this is a long-term project that will take several seasons to complete and deliver benefits to the farm. “This needs to be viewed in the context of increased interest in soil health and regenerative agriculture,” he says. “There are various basic principles which need to be addressed before farmers get too caught up with new regenerative practices, and in my view, drainage is the most important of these. The immediate practical benefits will be a wider window to work the soil in the right conditions and travel across it with machinery without causing structural damage. It will also help to reduce and manage the blackgrass problem and ultimately produce higher yielding crops.

“It is also important that we don’t create any negative effects, such as leaching of pesticides or nutrients through the drains. As well as careful planning, we will be looking at possible mitigation methods to reduce the potential negative effects of drainage, through the use of silt traps and filters for example. Projects like this show the benefits of farmers talking to their advisors and agronomists and working together to solve longer-term wider management challenges; not just shorter-term in-season crop management.”