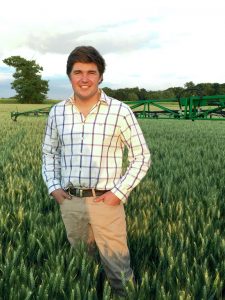 A young contractor on the Norfolk/Suffolk border has been awarded one of four national bursaries this autumn in an innovative Agrii scheme to encourage and reward those passionate about the future of British farming.

Having purchased a self-propelled sprayer in May 2015 with savings from a cereal harvest in Australia and freelance work for East Anglian farmers and contractors, Harper Adams graduate, Robert Coe (25) from Diss is currently building his own contract-spraying business on the Norfolk/Suffolk border.

He has received a grant of £1500 as part of the company’s Best of British Farming Bursaries designed to support courses of study and projects that further the knowledge and development of young farming professionals and are of value to British farming as a whole.

“I want to gain a better understanding of pest, disease and weed management to work to far greater effect with my farmer customers and their agronomists to make the very most of their crop protection inputs in improving performance.

“Observing greater flea beetle activity at dusk, I’ve already fitted LED lights to my sprayer boom so I can better target this serious pest by operating more confidently at lower light levels.  BASIS training will, I’m sure, lead me to make further such improvements to the service I provide.”