Latest carefully controlled Agrii trials suggest so-called biostimulants may have a valuable role to play alongside fungicides in increasing wheat yields by helping the fight against Septoria, in particular.

However, the research-led agronomy company’s studies show some products clearly work better than others and even the best needs to be employed as a regular component of the fungicide programme for the greatest effect.

Undertaken as part of a major Septoria management improvement programme at the Agrii iFarm near Holcombe Rogus on the Devon:Somerset border, the 2014 research involved fully replicated trials with several different biostimulants – products that act upon and enhance metabolic or physiological processes within plants and soils. These were applied to high output feed wheat Leeds as part of two three-spray fungicide regimes – a standard programme and a more robust one designed for enhanced Septoria control.

“The huge threat that Septoria poses across our region was crystal clear in an average yield of just 4.59 t/ha from our untreated control plots which had 100% of the flag leaf infected by July 3,” pointed out agronomist, Mike Horsburgh who oversaw the trial. “This compared with outputs of 8.52 t/ha (44.3% infection) and 9.08 t/ha (14.5% infection) respectively from standard and robust fungicide regimes – both without a T0.”

Without fungicides, no reduction in Septoria infections was seen from applying the biostimulants at all three timings. This wasn’t surprising as none claim to have any fungicidal effect. However, yields were improved by between 0.3 and 0.6 t/ha, suggesting a possible effect on general plant health and the ability to tolerate disease.

The biostimulant giving the best overall results produced a noticeable reduction in Septoria infection (to 12.5%) when applied with the standard fungicide regime, although this was accompanied only around half the 0.56 t/ha yield boost achieved from the robust fungicide programme giving a similarly improved leaf disease level.

Adding this particular product to the robust fungicide regime, however, proved especially valuable in both disease control and crop performance. Applications of 2 litres/ha with the T1, T2 and T3 fungicides reduced early July Septoria on the flag leaf to an average 4.3% and increased yields to 10.26 t/ha (Figure). 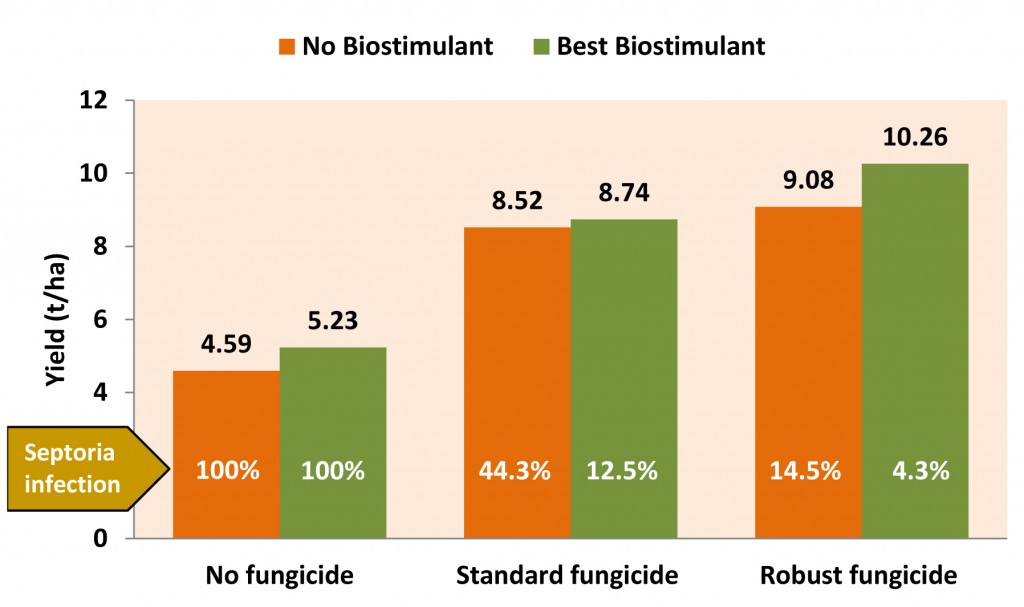 “Our results certainly suggest there may be something in biostimulants, despite the general air of ‘muck and mystery’ that has surrounded them,” commented Mike Horsburgh. “After all, we’ve long appreciated that healthier plants are better able to withstand and tolerate disease than those under nutritional or environmental stress.

“Considerable progress has been made in understanding the science behind natural plant defence mechanisms in recent years. At the same time, biostimulants are widely used and valued in vegetable and fruit growing these days. So they may well have an increasingly useful role in modern field cropping.

“This would certainly be valuable in our drive to cost-effectively drive yields against a background of changing fungicide sensitivity and increasing losses of chemistry, not to mention greater climatic extremes and grain market pressures.”

Having said that Mr Horsburgh is keen not to read too much into a single year’s results. All the more so given the considerable variation evident in both disease levels and yields between the different treatments seen to date.

“Our studies clearly underline that all biostimulants are not the same,” he stressed. “While the best one showed real promise, the others were generally less encouraging. Our work so far also suggests they are likely to be most valuable with the best fungicide regimes rather than as a prop to less effective combinations of chemistry. Equally, rather like our work with crop micro-nutrition, they indicate that even the most effective products need to be used as part of a continuing programme rather than at a single particular timing.

“There’s a lot to learn about this whole area of crop technology. It raises a host of exciting performance improvement prospects. We’re expanding our studies over the coming year with the aim of identifying the most promising biostimulants and developing the best prescriptions for employing them to the greatest commercial effect.”