Agrii’s Head of Agronomy Colin Lloyd looks over trial results from around the country and gives thought to the coming drilling season. If you would like more information on how varieties have performed in your area, please consult your Agrii agronomist who has detailed results from all our variety sites. 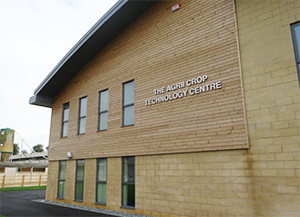 Well the weather has been rather unhelpful for the last few days to say the least, but the three trials combines based at Throws Farm are rolling again today so mustn’t grumble too much! The National trials picture is much the same with good progress being made and data being gathered at a pace. By and large yield and quality from the trials are good and obviously reflecting the on-farm results and whilst the winter oilseed rape looks rather average in yield, winter barley has really excelled and the early data from the winter wheat trials are looking good.

The wheat plots at Stow Longa are the next big lump of harvesting to do and I look forward to some headlines from this work very shortly if the weather holds. I have received many phone calls from growers who have attended the Stow meetings and they are all reporting that where blackgrass populations are low then yields have been good and in the 3.5 -4.5 tonnes per acre range. However where the blackgrass is far worse the yields are around 2-2.5 tonnes per acre. It is very sweet of these guys to take time out to ring me and confirm in their minds that the messages around the work at Stow is highly relevant and it will be interesting to see how many more of them will try and adopt relevant strategies going forward. On the other hand some have mentioned that maybe this season with perceived lower dormancy blackgrass seed because of the good light intensity and lack of rainfall at flowering plus moisture to aid germination that all the seed will be chitted and out of the way so they can drill a little earlier – so I feel the usual ‘its good weather for drilling so I will get going and all will be well’ might still have a strong following this autumn….!

So to start with winter barley – the final variety trials are reported from the Inverurie iFarm strips. The same pattern emerging here as with many sites which is that the high yielding 2-row varieties are in and amongst the pack with hybrids. Take Off on KWS Glacier adding another 0.59 t/ha at this site over SPD and all the varieties yielding over 10 t/ha.

The official trials are showing that Volume is still at the top over the 4 year mean, but being chased hard by the KWS 2-row trio of Glacier, Tower and Infinity which all yielded the same as each other so an honourable ‘draw’ for these and only yielding 3% less than the Volume hybrid.

At Tiptree down on the Essex coast we have been looking at the performance of conventional 2-row and 6-row varieties v hybrids. Here in what has been an ideal winter barley season according to the yields achieved across the UK, we can see that there is flex in seed rates across all the varieties and that it is not only hybrids which could be drilled at lower seedrates – however I would be very cautious at trying to drive seed rates down on the back of this one trial especially if there are grassweeds present, but interesting in its own right! The main point still demonstrated here with the hybrids and taking Galation as the example, 200 seeds m2 is about right for a hybrid and confirms what we have seen over the last four years. But the final point around hybrids is that as shown in my previous notes this harvest, their performance can be very strong, the high yielding hybrid results are Regional, so careful consideration still needs to be made…

Winter oilseed rape and the results from Bishop Burton in Yorkshire show many of the expected varieties at the top including V316OL, DK Excellium and PT211 but as is explained by Jim Carswell this trial was drilled into a dry seedbed and very little rain followed in September so interpretation needs to be a little on the cautious side. However this concludes the main site variety trials across the UK and has enabled the technical and commercial seed teams to evaluate not only current varieties but those coming through. To this end the variety sowing lists are completed for this autumn and as soon as we have all of the seed available from breeders then drilling will commence. This is expected to be achieved next week so in good time. Other oilseed rape trials are already being drilled including seed treatments, starter nutrition, flea beetle and herbicide work so a good start to the new season.

Back to Bishop Burton for a moment and it is really exciting to see how the new Technology Centre looks and within this building there are facilities for the Northern trials Team lead by Jim Carswell not only for the work being achieved on the Bishop Burton site – but for training workshops etc. Please take a look at the photos as it is great to see the Agrii business so strongly highlighted in the heart of this really vibrant Agricultural College.

On to winter wheat and firstly I asked the guys to do an extra lodging score on the Lenham (Kent) site as there is an untreated run of 72 varieties alongside the replicated treated trial. Here is a very high yield potential site with super plots so an ideal opportunity to assess the straw strength of several varieties. The graph shows how resilient many of these are considering no pgr and plenty of nitrogen! However Panacea and Twister are pretty well lodged and Evolution, Mariboss and KWS Croft are also a little on the weak side. No great surprises here but nice to have confirmation of our thoughts.

Following the early September drilled data I sent last week with Dickens doing very nicely, I had a note from Matt Clark who is one of our agronomists in The East and the family farm is located on the Herts/Essex border. A first for my notes – a video! Please take a look at the combine yield monitor in a seed crop of Dickens grown on the farm and not only yielding extremely well, I think the story is a lovely one with Matt summing this up as, ‘the ironic thing is this field broke the world wheat record in 1981 @ 5.45 t/acre. We just cracked open a beer as we finished as my late grandfather would have been proud of the result!’ I am sure we would have been…

Dickens was used across several iFarm sites this year as part of the ’15 tonnes’ challenge and many agronomists have been involved in looking at various aspects of agronomy to support such high yields as the benchmark set and I await with interest the results of these of the next couple of weeks. However, freshly reported from our Brackley (Northants) site is the following from site co-ordinator Andrew Richards, ‘the strips of Dickens were cut on Thursday evening, areas measured and weighed over a weigh bridge. We have now calculated the yields which are Dickens drilled at 250 seeds/ m2 = 15.42 t/ ha and Dickens drilled at 350 seeds/ m2 = 14.65 t/ ha. The highest spot yield was 17 t/ ha. Samples have been taken for grain analysis and Greg Taylor and myself will produce a full report with inputs detailed and in season measurements etc in the next few days but I thought the headline yields would be of interest.’ And indeed they are and rather throws the gauntlet down to the other 15t challenge participants – great stuff!

The final report today comes from our South Wales trial site where we are placing particular emphasis on looking for tritici resistance in new wheat crosses and to this end have 1920 wheat crosses in mini plots drilled for assessing tritici in particular. This is in conjunction with many breeders and we are conducting the work on their behalf. For us it is purely trying to identify the very best crosses and to follow these through the system, all the time gaining knowledge. On the same site are fungicide trials and also the variety trial attached. Firstly big yields and large responses to fungicides judging by the treated v untreated yields. Several of the top yielding varieties are as we would expect in a high tritici situation and sees Solace and Crusoe right at the top. Solace was identified last year in the Regional trials as being very useful under tritici pressure and whilst not making the Recommended List on its overall UK yield, we knew that as a Regional variety for the West and S West it could be very useful to Agrii growers. Unfortunately the seed crop this season has seen an admix problem but we will multiply this autumn. The point being that we want to get into the position that our Regional work can truly deliver Regional varieties and we will support them if they are right for our Growers whether they make the RL list or not. There are many other reasons to grow a variety on top of absolute yield and of course this trial result absolutely shows that.

The Crusoe and Solace in particular had very sound % green leaf scores from the assessments taken by Syed Shah on 13th July and let’s state the obvious – there is a strong correlation between % green leaf area and yield and once the final report is put together I think this will make fascinating reading. But just looking at this interim yield data, to see a mean yield difference across 39 varieties of 11.84 t/ha v 6.05 t/ha untreated, that is highly significant however you look at it. But whilst it shows genetic resistance pays and is so important going forward, even the best two in Solace and Crusoe gave a 3.5+ tonnes/ha increase in yield where fully treated so there is plenty of room for fungicide programmes to maximise margins for Growers!