State-of-the-art DNA analysis is highlighting valuable differences in soil biology under different soil management regimes, offering the opportunity to secure real and lasting improvements in both crop and environmental health.

As part of the Achieving Sustainable Agricultural Systems (ASSIST) programme, researchers from Agrii and UK Centre for Ecology & Hydrology (CEH) are working to achieve a far better understanding of soil biology to inform future agricultural and environmental policy and practice.

It’s quite clear many arable soils need particular attention to maintain their productive ability and biological health in the face of our changing and more extreme climate,” observed CEH’s Professor Richard Pywell. “Not least in the face of the Government’s growing desire for delivery of ‘public goods’ and increasing restrictions on agrochemical and fertiliser use.

“Under the banner of soil health improvement, though, farmers are being encouraged to do all sorts of things – at considerable cost, in many cases – on little more than anecdotal evidence. If we really want to improve things in a sustained way, we simply have to get more science behind our efforts.

“We know that soil biology in general and micro-biology in particular is a major determinant of soil health. But we need to understand exactly what constitutes a healthy soil; what healthy soils really contribute to crop performance as well as other key ecosystem services like carbon storage, water infiltration and greenhouse gas emission reductions; and, most importantly, what we can do to most reliably improve their abilities to deliver in all these respects.”

Rob Griffiths, Tim Goodall and Melanie Armbruster from CEH molecular ecology team have made a determined start to address these and other crucial questions over the past two years using Agrii’s Stow Longa technology centre as their key testbed; taking advantage of the site’s field-scale trials exploring a wide range of different cultivation and cover cropping regimes side-by-side under typical heavy arable land conditions.

Extracting DNA from soil samples taken across the trials has enabled them to characterise the microbial communities under each in considerable detail. This, in turn, has highlighted marked differences in soil bacterial, fungal and other microbe communities between the various management regimes.

DNA barcoding has further allowed the team to track specific bacteria, fungi and eukaryotes, identifying marked differences in the balance of potentially beneficial and harmful microbes under different cultivation and cover cropping practices.

“Irrespective of the marker genes they used, they recorded large differences in the communities of all three types of microbe between the cultivation and cover cropping treatments. These were clearly associated with changes in organic matter level, highlighting the importance of this soil parameter (Figure 1). 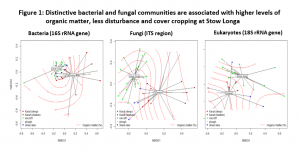 “The degree of cultivation also appeared to be a factor, with the communities under a straw raking regime being similar to those under the various cover crops and distinctly different from those under either shallow or deep tillage.

“Our studies showed noticeable improvements in organic matter with both reduced cultivations and cover cropping,” he added. “Interestingly, over the three years of the Stow trials so far, less cultivation gave a greater improvement than the cover crops.”

“Even more interestingly perhaps, we saw increases in organic matter and decreases in soil disturbance leading to higher populations of our potentially beneficial micro-organism indicators together with lower populations of those considered to be harmful (Figure 2).” 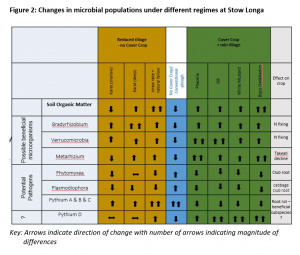 Richard Pywell stresses it is very early days yet, given the number of species involved and the complexity of their interactions to understand. However, he has no doubt that the definite shifts in microbial populations after three years of soil management trials at Stow Longa highlighted in these studies are moving the understanding of soil biology and health under arable systems forward in a very positive way.

He and Agrii project co-ordinator, Andrew Richards accept that, by their nature, arable soils are unlikely to ever match the level of microbial diversity and stability of those under old meadows. However, they are convinced much can be done to encourage more stable communities with a better balance of beneficial to harmful microbes by employing practices which both reduce physical disruption and increase organic matter content of the soil.

“This work is giving us solid scientific evidence of the way we can alter the vital microbiology of our soils with practical management changes,” Andrew Richards pointed out.

“We don’t yet know whether the microbial indicators being used initially are the right ones, or what levels are significant. Nor do we know what, if any, implications the changes in soil communities we’ve seen may have for plant health or other environmental factors.

“However, our studies confirm that regularly disrupting microbial populations with cultivation or failing to provide them with sufficient organic matter to feed on will lead to less desirable soil communities. These are also likely to be less stable, more prone to domination by coloniser species and potentially more vulnerable to environmental change.

“Having said that, well-targeted subsoiling may have a positive effect on soil biology by aerating otherwise anaerobic soils while having a negative effect in other environments. That’s why we need to build a much better understanding of the key components of the microbiome and how they respond to soil management practices.”

To do just this, Agrii and CEH have extended their study to include around 400 fields across the south of the country from this season to explore the extent to which the patterns identified at Stow Longa are replicated under the widest possible range of cultivation regimes, soil types, rotations and climatic conditions.

“With the widest dataset, we can begin to build a reliable model to help growers and industry advisers plan their soil management for the most cost-effective results,” suggested Richard Pywell. “At the same time, we can drill down deeper into the micro-biology of the most promising sites to identify what really sets them apart from the rest and why.

“We are at the start of what we believe will be a step-change in our understanding of the mechanisms underpinning soil health; the sort of change that will be essential if we are to reliably improve the functioning of our most important farming and environmental resource, let alone achieve the ‘cleaner, carbon-neutral farming’ that has to be our ultimate aim.”