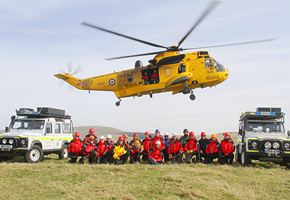 The search for Agrii’s local Rural Community Champions is over and it is delighted to announce that the team at the Border Search and Rescue Unit (BSARU) has been selected as finalists, representing the North of the UK.

Agronomy business, Agrii, launched the Rural Community Champions competition in January. It asked the farming community and general public to send in their nominations as part of its nationwide campaign to identify and celebrate the people who make a real difference to the rural communities in which they live and work. The BSARU team was one of three finalists to be selected by the judging panel – one from each Agrii region – North, East and West.

The team was nominated by Brian Macfarlane from Police Scotland and were selected in recognition of the real difference they make to their community. The team is based in Kelso in the Scottish Borders and is made up entirely of volunteers. They provide mountain rescue assistance in the rural community and are on call 24 hours a day, every day of the year. Many of them juggle working full time in agriculture with their volunteering duties for the BSARU.

Police Scotland rely heavily on the team as a resource to search for missing people in rural areas and members of the unit are trained to the same search standard as specialist police units.

The unit covers the Eastern Borders, Lammermuir and Cheviot Hills, but are often called in to assist other teams throughout Scotland and the North of England. In January alone the team of volunteers were called out on five occasions, in appalling weather conditions, to search for missing or stranded walkers – equating to 412 man hours over and above their normal working day.

Stuart Fuller-Shapcott, who is the team leader for BSARU and has volunteered with the team for 24 years, said: “We’re delighted with this award, the team are all volunteers and we count on the good will of our employers to get away to call-outs, and also the understanding of our wives and families for rearranging plans. The unit celebrated its 50th official year in 2013 and we rely heavily on donations to keep our work going, so it’s great to be recognised by our local community. During periods of bad weather, particularly snow, our team has spent countless days selflessly serving our rural communities.  With our three 4×4 ambulances we are able to get to places none of the other emergency services can do.”

Mark Thomas, Agrii’s Head of Marketing said: “We had a truly excellent response to our Rural Community Champions competition and it’s clear to see that there are many people making a big difference to their communities. This competition gave people the chance to show that this hard work isn’t going unnoticed in their local area. Our three shortlisted finalists are all very deserving, with the BSARU team being true champions of the rural community in the North region. We wish the team the best of luck in the final round.”

The BSARU team were chosen as a finalist from over 100 nominations from across the UK, and will receive £500 in prize money, which will go towards funding the unit and its activities. The overall national winner will be chosen from the three finalists by Agrii customers at Agrii iFarm events this summer and will win a total of £1,000.

The campaign was run in conjunction with FCN, the charity supported by Agrii which provides guidance and support to farming families in times of crisis. Through campaigns like the Rural Community Champions project, Agrii hopes to raise the profile and highlight the importance of rural communities, and in turn demonstrate the support that FCN can offer farming families in times of need.