A change in arable machinery can often expose variable farm performance where none was recognised before. CPM finds out how growers are using on-farm trials to get a greater understanding.

More and more growers are using precision farming technologies to vary inputs of both seed and fertiliser, but few can pinpoint the efficiencies or benefits of what either brings. For this farmer in Agrii’s Digital Technology Farm network, it was a change in farm machinery that prompted them to seek a better understanding of varying inputs. That quest has led them to take part in a series of on-farm trials.

Farming 4000ha from west of Edinburgh to Duns in Berwickshire, Gus Seed can trace his family business’ involvement in precision agriculture back over 12 years. But the real game-changer for him came with a technology switch they took just three years ago.

“We upgraded the combines and invested in four John Deere 785i models, equipped with weigh cells in the grain tank and the latest telematics. It’s phenomenal technology and really opened our eyes to how the crop varies across a field,” says Gus. 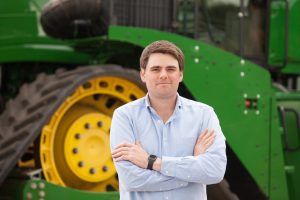 The family partnership farms soils across West Lothian and Berwickshire that vary from easy-going loams to tougher, grey carse clay. Potatoes and vining peas accompany combinable crops on some of the kinder soils, while spring oats and barley are rotated with soft Group 3 and 4 winter wheat varieties, barley and oilseed rape.

“We’ve mapped the farm for P and K for the past twelve years and carried out a conductivity scan around eight years ago, but never really utilised it as much as I feel we should,” explains Gus.

Gus Seed had tried a number of crop canopy sensors to vary the rate of nitrogen fertiliser but never really felt these systems did much more than cost money.

Over the same time, the business had been using a number of crop canopy sensors to vary the rate of nitrogen fertiliser in real time as it was applied to the field. “I never really felt these systems did much more than cost us money,” he says.

That was until the upgrade in combine technology. “We hadn’t seen the yield variability in quite such clarity before, so decided it was time to get a better idea of what the variable-rate technology could do.”

Gus worked with his agronomist, Craig Herkes of Agrii and Rhiza specialist Jack Wilson to set up a trial last year across a field of OSR. “It was a 30ha field with soils that vary from sand to stiff clay, and there’d been quite a bit of over-winter pigeon damage, so there was plenty of crop variability to put to the test,” recalls Craig.

He based fertiliser applications on an N-Min test, varying the two fertiliser doses according to crop canopy and expected yield. The crop of Ergo high erucic-acid (HEAR) OSR had been drilled on 20 Aug following wheat with 150kg/ha of DAP and 100kg/ha of Calcifert applied at drilling through the 10m Horsch Sprinter. Application plans were drawn up in Rhiza using satellite-generated NDVI maps.

Once combined, the varied areas yielded up to an extra 1t/ha.
“Admittedly this was only in the most extreme parts of the field, but there’s a considerable cost benefit to be had here, if applied properly, and it’s relatively easy to roll out across the business,” he says. 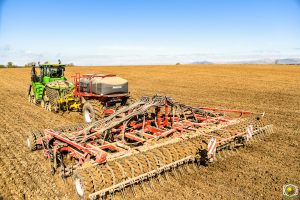 Gus has had similar reservations about variable-rate seeding technology he’s been using for the past five years, so both aspects are being put to the test this year as part of Agrii’s DTF on-farm trials.

The variable-rate N trial is in a field of KWS Barrel winter wheat, while the seed rate of a field of Laureate spring barley has been varied by as much as 40%. “I don’t think you really get the benefits from the system unless you’re prepared to vary over a wide range – 10-20% isn’t enough,” maintains Gus.

The tramline trials will be harvested and the data from the yield monitors processed through the ADAS Agronomics model which delivers statistical confidence to on-farm trials. In an additional trial, levels of nutrients applied to part of a field of Elation winter wheat have been varied according to the results of tissue testing carried out through the season.

“This links Rhiza with the small plot trials work carried out in this area by Agrii across its technology centres,” explains Craig. “Tissue samples are taken before each of the major spray timings and analysed for a whole range of macro and micronutrients with applications made according to the results. The system adapts to the season and it’s a very efficient way of feeding your crop with everything it needs.”

For Gus, manganese is a nutrient routinely applied. “The testing picked up that we have been slightly low in potassium, calcium, magnesium and zinc. It’s the extra components that make the difference – I wonder if we sometimes focus too much on the major elements and not enough on the micronutrients,” he notes.

While he’s looking forward to the results of the trials, he’d be keen for the technology to be used to give him a clearer understanding of how to use precision agriculture across the farm. “The benefits are clearly there, but the limitation to get the most out of the technology is time. Data still has to be interpreted and a lot of it transferred manually, which is clunky, so we need algorithms built in that manage this automatically. With the advances in sensors and systems we now have, and with Rhiza being a farmer-orientated platform, I think the day this all works together won’t be far off,” he says.