More and more growers are using precision farming technologies to vary inputs of both seed and fertiliser, but few can pinpoint the efficiencies or benefits of what either brings. For this farmer in Agrii’s Digital Technology Farm network, it was a change in farm machinery that prompted them to seek a better understanding of varying inputs. That quest has led them to take part in a series of on-farm trials.

Ever since Tim Clark bought his first Patchwork GPS in 2007 as a cheaper alternative to foam bout markers on his sprayer, he’s been a keen advocate of the savings precision farming can bring across the 650ha of arable cropping he farms near Yeovil in Somerset.

“Section control on the fertiliser spinner and sprayer have saved us so much in time and effort, not to mention increasing the accuracy of application, and therefore reducing spend on inputs. We’re now running a TopCon RTK system that allows us to control individual nozzles and have returned to using liquid fertiliser, making the savings and accuracy of application considerably better,” he says.

Since 2014, Tim’s been working with Agrii agronomist Brendon Moolman to develop a reliable system for varying inputs that meets the needs of combinable crops grown on Hanslope Series soils with clay content varying from 30-60%. 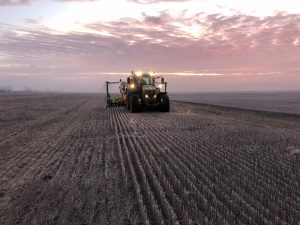 “We got the farm sampled with SoilQuest (now Rhiza) in 2013 and had fields mapped and zoned according to their conductivity analysis,” recalls Brendon. “The results from each zone showed us that available P was largely the limiting factor, which is typical on calcareous clays. The results also highlighted the lack in variation in soil type across the farm.”

But it was a switch into zero tillage and the purchase of a 6m John Deere 750A direct drill in 2016 that exposed some variability. “Tim aims to drill winter wheat after mid-Oct to increase cultural control of blackgrass. One aspect we noticed in the first autumn of zero-till drilling was the lack of N mineralisation and colder soils at that later point of drilling. These factors exacerbated any underlying issues we’d not previously seen in a scratch-tillage system that seemed more forgiving for crop establishment.”

The move to zero tillage showed up underlying issues not previously seen on the Somerset farm and seemed less forgiving at later drilling dates. 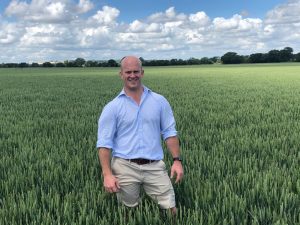 Before the following autumn, Brendon analysed NDVI and EC maps from Rhiza, together with yield maps from the combine and generated variable-rate seeding plans, aiming to bring a more even crop canopy into the spring. “Although we have seen notable differences in spring crop canopies, producing the correct seed rate plan is not something you can do in just one season. Our variable seed rate plans have been refined year on year as we collect more data,” he explains.

Using Rhiza satellite imagery, overlaid with drainage maps has also identified areas that need attention. What’s more, using the Contour smartphone app, Brendon can pinpoint locations in the field that warrant investigation or mark out areas with polygons, such as rabbit damage or blackgrass. These are then used when generating variable seed rate plans.

Rhiza’s also used to generate variable-rate N applications, he explains. “Generally, nitrogen’s applied in three to four splits to the wheat, with rate varied using the satellite-generated NDVI and chlorophyll maps. The basic principle has been to feed poorer areas of the field early with higher rates of N to promote tillering while cutting back on stronger areas. The final dose tends to be based around adjusting for yield expectations, with margin the primary driver.

For Brendon, it’s the combination of the two approaches that brings results. “You can’t even everything up with the seed rate, nor get the best from the crop simply by varying N. It’s also important to ground truth – go out into the field and confirm what the NDVI maps suggest by taking tiller and plant counts.”

Tim’s less convinced of the results, however. “The variable-rate seeding has helped to even up the crop, but I’m not sure we have the right policy on variable-rate N,” he says. “Since my father’s day, part of one field has been called “Hungry Hill” because we assumed it’s always needed extra N. Brendon adjusted seed rates in this part to account for poor germination and for the first time we started to get even crops at harvest. It is technology like this that can identify those areas much better and should help us apply exactly what the crop needs.”

So maybe the DTF trials will shed more light on what each component is bringing to the game. These are taking place in a 32ha field drilled in late Jan with Graham winter wheat. The variable seed rate trial consists of seven 36x340m plots – four have been drilled with a flat seed rate of 490 seeds/m² and three with variable seed rates. The variable seed rate plan in the trial area is increased according to the Rhiza EC maps by up to 20%, with all plots receiving flat rate inputs from thereon. “In certain situations we do increase seed rates by up to 30%, particularly on working headlands or where we have notable weed or pest issues,” Brendon explains.

The variable N trial is located on the other side of the field which is divided by a beetle bank. It consists of four 36x200m plots, two of which have received flat rate N and the other two variable N. “As it was late drilled, the crop was small to start with and received a blanket application of 100kgN/ha on 7 March. In early April, a further 40-80kgN/ha was applied, aiming to build the poorer areas. The final dose delivered 40-70kgN/ha, bringing total applied up to 210-220kgN/ha,” he explains. The flat rate N plots received two further doses of 60kgN/ha, bringing total applied to 220kgN/ha.

Tim’s reserving judgement on the trial until harvest, although he agrees the technology has helped even out crops and has the potential to resolve issues the farm has always had. But both Tim and Brendon agree on where the game-changing difference has come. “The move to direct-drilling has shown up areas of poor drainage far more savagely than if they were being cultivated,” says Tim.

“We can now identify these areas and understand just how much they’re compromising output, then work out a plan to resolve any issues. It becomes more about identifying less profitable areas, assessing the effects of the proposed solutions on margin, and so increasing efficiency and reducing the cost of production,” he concludes.