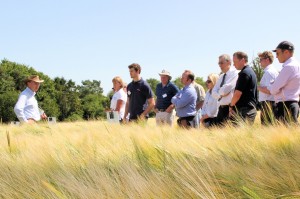 Spring barley-growing opportunities are set to expand substantially across the country over the coming few years as international brewing giant, AB InBev seeks to source all grain for UK Budweiser production from British farmers.

As well as supporting double digit annual sales growth in the home market, successful development of the specialist malting barley recipe pioneered by Agrii in partnership with Glencore and the Crisp Malting Group this season could open up significant national Budweiser malt export opportunities.

“We currently obtain most of the barley we need for UK Budweiser production as malt from continental Europe,” explained AB InBev global agricultural development director, John Rogers at a special grower’s day near Northampton last week (July 9). “But we’d like to have all this grown and malted in Britain as soon as we can.

“Wherever possible, we always source locally. This gives us a short supply chain, excellent provenance and the consistent quality and supply our brewers need. It also allows us to build close relationships with growers for mutual benefit, security and improvement. 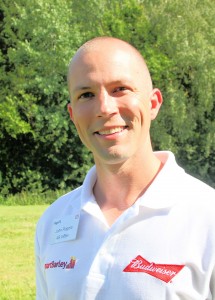 “A limited acreage of the Budweiser-approved French variety, Explorer grown as a pilot with Agrii on eight farms last year showed us we could reliably source from the UK. So this season we have nearly 40 farms growing around 1500 ha of the variety on contract. Over the next two years, if possible, we intend to build to the 5000-6000 ha we currently require for self-sufficiency. On top of this, of course, we’ll need to support our planned UK sales growth not to mention  development in a number of overseas markets.

“We’re really excited about producing UK Bud from British barley,” he stressed. “Of the
5 million tonnes of grain we use globally each year, we’re currently buying half directly through a network of more than 20,000 growers in eight countries. We’re offering the SmartBarley programme we’ve developed with them to our British growers so they and their agronomists can take advantage of its particular benchmarking and improvement value.”

The famous Budweiser recipe –  involving rice as well as barley – requires malt from varieties approved through AB InBev’s exhaustive testing regime with a higher nitrogen content than normal in UK practice (1.8-1.9%). This makes production well-suited to heavier land than traditionally considered ideal for malting crops. It also demands a less-than-traditional approach to agronomy. 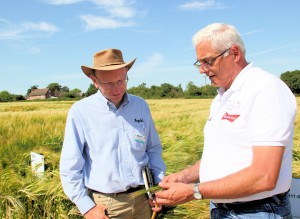 Explorer fits the bill well. Markedly higher yielding than brewing standard, Propino in farm testing, Agrii identified it as a valuable market development opportunity for UK growers, not least for the fact that it can be pushed hard with significantly more and later nitrogen than usual without endangering the malting specification.

“We recommend sowing Explorer at 320-360 seeds/m2 depending on time and conditions, advised Agrii seed trials manager, Colin Patrick. “We also suggest using a manganese or Take-Off seed treatment – or both – to enhance establishment and root development, and applying up to 160 kg N/ha – most by GS14, but with around 30-40 kg/ha held back to GS39.

“As the variety is neither tall nor weak-strawed we don’t see the need for an overly robust PGR regime. However, we’ve found an early application of Adjust by GS14 valuable in encouraging stronger tillers and increasing grains/ear. A straight-forward and cost-effective fungicide programme is likely to suffice in most cases too.

“Like many continentally-bred varieties, Explorer takes off rapidly from late March or early April sowing and is noticeably early maturing than most,” added Colin Patrick.  “Later sowing is perfect for heavier ground, and earlier maturity gives a good entry for oilseed rape.

“All-in-all, we see the crop being especially valuable in extending heavy land wheat and rape rotations to improve black-grass control and relieve autumn workload pressures. It will of course, have additional value in meeting the CAP three crop rule.” 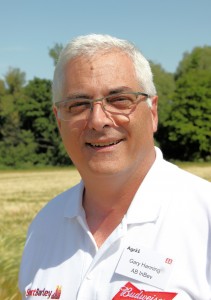 Alongside extensive field trials to fine-tune Explorer agronomy for the most consistent and cost-effective  production, Agrii is currently evaluating a wide range of advanced spring barley genetics – including six specially-selected US varieties from Budweiser’s own breeding programme – across four UK sites.

The testing is designed to identify varieties that can build-on Explorer in meeting AB InBev’s requirements for premium beer making with a combination of Budweiser approval, high output and the best possible UK agronomics.

“The six varieties we’ve brought over from our US programme include three already approved for Budweiser production and three we expect will gain approval within the coming two years,” explained AB InBev global research director, Gary Hanning.

“We’ve chosen them for their proven performance under similar conditions to the UK and their success in our programme across a range of climate zones, indicating their adaptability.

“This is the first time we’ve ever grown our varieties in the UK and I have to say they’re taking to the conditions very well. We’re really excited to see how both they and the best of European genetics perform so we can develop those with the greatest promise for the future.

“It’s good to be able to work closely with an established variety evaluation programme that combines scientific rigour with commercial growing needs. I’m sure it will stand us in excellent stead in bringing forward a range of varieties to support our UK production aspirations in the years ahead.” 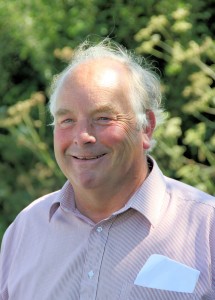 He first ventured into spring barley with NFC Tipple in 2013 when the dreadful autumn of 2012 prevented him drilling a large chunk of his winter wheat acreage. Impressive yields of malting quality grain confirmed the crop’s value. So he grew a combination of Tipple and high nitrogen Belgravia last season and this year all 60 ha (150 acres) of his spring barley is down to Explorer on an Agrii/Glencore contract with Crisp Malting for Budweiser.

“I jumped at the opportunity of a contract as soon as I heard about it,” he recalled. “For our ground it’s a no brainer. We can push the yield without worrying about nitrogens too high for traditional UK malting. We’ve really been learning how to make the most of spring barley over the past three seasons.

“It’s proving hugely valuable in dealing with black-grass we haven’t a hope of cost-effectively managing with chemistry these days. There’s plenty of time to kill off a good two flushes of weed growth with glyphosate ahead of sowing without worrying about whether we can get a reasonable seedbed for late winter wheat drilling.

“We have an assured premium market for the crop going forward. We’re getting an excellent response to a highly cost-effective fungicide programme. And early maturity looks like giving us a useful oilseed rape entry.”

One of the initial Explorer pilot growers last season, Richard Long who manages Barton Abbey Farms near Chipping Norton is another firm convert to Budweiser barley.

The 14 ha (35 acres) he harvested in 2014 alongside a similar acreage of Tipple on the farm’s mainly Costwold brash ground averaged 9.5 t/ha to outperform his spring malting standard by well over 0.5 t/ha. At the same time, it was a good two weeks ahead in its development and maturity.

“On our ground malting barley has always been a little higher in nitrogen than we’d like so it made perfect sense to grow for a higher N spec,” he said. “We made the Budweiser specification last year but with a decent amount of leeway; so this year we’ve applied an extra 30 kg of late N. It will be interesting to see how this drives both yield and nitrogen content.

“All 33 ha (80 acres) of our spring barley is down to Explorer this time around. It has grown really strongly again, competing well with the black-grass we have to be very conscious of with the ground it’s on. For us it looks like being just the spring solution we want. High output and added value for a secure market. It ticks all the boxes.”