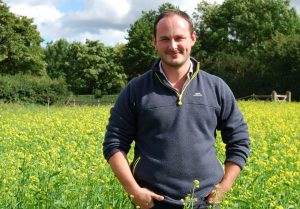 Two Harper Adams University graduates have been awarded  national bursaries this autumn in an innovative Agrii scheme to encourage and reward those passionate about the future of British farming.

William Watts (26) from Ludlow is currently researching biofumigation for potato cyst nematode (PCN) control in a PhD at the University, while previous student, 25 year-old Robert Coe is building his own contract-spraying business on the Norfolk/Suffolk border near Diss.

They have both received grants of £1500 as part of the company’s Best of British Farming Bursaries designed to support courses of study and projects that further the knowledge and development of young farming professionals and are of value to British farming as a whole.

Bill Watts  is using his Agrii award to attend the 6th International Symposium of Biofumigation in South Africa to present a paper on the subject, while Robert Coe is investing his in a BASIS Certificate in Crop Protection.

“My research suggests that correct maceration and incorporation of a green manure crop rich in glucosinolates can make a substantial contribution to PCN suppression,” points out Bill.  “In addition to its role in complementing hard-pressed chemistry, the technique offers valuable improvements in soil health and workability.

“The Agrii award means I can share the results of this work more widely while gathering the latest global intelligence on new biofumigation techniques from leading researchers in the field for use by British growers.”