Getting your rotational regime right on bad black-grass ground can be worth almost £650/ha/year in extra gross margin, together with a 25,000 seeds/m2/year reduction in weed seed return, reveal the latest results from the UK’s most comprehensive field-scale grassweed management research programme.

The long-term rotations trial at Agrii’s Stow Longa Technology Centre near Huntingdon is showing a four year gross margin difference of more than £2500/ha (including cultivation costs) between the best and worst regimes (Figure 1).

This is accompanied by a total black-grass return difference of 107,000 seeds/m2, underlining the value of well-managed rotations in dealing with grassweed problems. 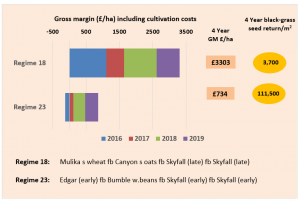 “Altogether, our rotational trial now has fully-costed results from a total of 27 regimes over four seasons,” says Agrii head of Agronomy, Colin Lloyd. “We currently have six separate rotations running in 1 ha blocks each across three soil management regimes (ploughing, deep one pass and cover/catch cropping). In addition, all the winter wheats are either early or late sown, and have robust pre-planting, pre-em and peri-em herbicide programmes.
“This enables us to compare the widest possible combination of rotational, soil management and drilling regimes in terms of both gross margin and black-grass seed return both on an annual basis and across the rotation in a thoroughly commercial setting.

“Both the best and worst four-year margins (which include cultivation costs) came from the two rotations involving second wheats last season. Both also came from identical soil management sequences over the years.

“So, the differences nicely highlight two of the most crucial black-grass management imperatives we have found in our 20 years of Stow Longa research – a rotation that keeps weed levels low, and a winter wheat sowing date that never lets it off the hook.”

The 2019 performance of the second wheats in adjacent blocks across the different cultivation regimes and sowing dates in the trial very effectively illustrates the importance of rotation.

Both crops of Skyfall actually produced reasonable yields and margins. However, the ‘field’ with three years of non-winter cropping ahead of its first wheat (a fallow followed by spring wheat then spring oats) delivered 10.36t/ha and a gross margin of £631/ha with a black-grass population of 98 heads/m2 (Figure 2).

“A low black-grass seed return history from three years out of winter cropping meant the better-performing second wheat had a legacy of just 21 black-grass heads/m2 from its previous wheat crop,” Colin Lloyd reports.

“In contrast the poorer-performing crop started off with a legacy of 91 heads/m2 – an additional burden of 700+ weed seeds/m2. In practice, this should have ruled out a second wheat, in terms of black-grass proliferation in the rotation if not individual crop performance. But we wanted to see the consequences of getting things wrong.

“Having said that, by delaying second wheat sowing in the poorer rotation sowing until late October we were able to bring in a very respectable average of 10.39 t/ha across our three cultivation regimes for a gross margin of £642/ha with a black-grass population of
112 heads/m2.

“Although far from ideal in its black-grass legacy, this was up there with the average performance of the better rotation, showing you can deal with a poor rotational legacy if you managing things right.
“If you don’t, though, our results really underline the trouble you can get into,” he points out. “Drilling Skyfall in the last week of September in the poorer rotation led to an average yield of 9.01 t/ha across the three cultivation regimes, a margin of just £424/ha and a black-grass population of 335 heads/m2.”

The 2019 results also highlight that doing the wrong thing in a good rotation can also seriously undermine performance on every front. Sowing the second wheat in late September here, for instance, gave an average yield of 10.04t/ha, margin of £566/ha and blackgrass population of 166 heads/m2 compared with 10.68t/ha, £696/ha and 29 heads/m2 from holding back on sowing for a month.

Although still marked, the performance penalty here at around 0.6 t/ha, £130/ha and 137 black-grass heads/m2 was nowhere near as severe as the 1.4t/ha, £218/ha and 223 heads/m2 from compounding the rotational problem with early sowing. 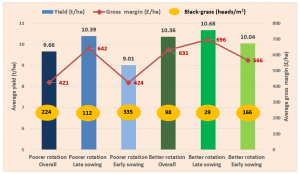 Then, of course, there’s the soil management approach to take into account. Averaged across rotations and sowing dates, there was relatively little difference in the second wheat yields between the ploughing, deep one pass cultivation and cover/catch cropping regimes employed in the trial.

The ploughing and deep cultivation regimes delivered similar margins, noticeably higher than the cover/catch cropping. And ploughing, unsurprisingly perhaps, resulted in markedly lower black-grass populations than either of the other regimes.

Indeed, the latest results underline the great leveller ploughing can be, bringing the average second wheat yields, gross margins and black-grass populations of the poorer rotation to nearly those of the better rotation.

There was a much greater disparity between the rotations in all three performance measures under both the deep one pass cultivation and cover/catch cropping regimes. Neither were able to bring the average yield or gross margin from the poorer rotation anywhere near that of the better one. And both allowed a much more serious build-up of black-grass in the poorer rotation.

“As with our four year margin comparisons, the real eye-opener comes when you stack the combinations of different rotations, soil management approaches and 2019 second wheat sowing dates together,” stresses Colin Lloyd. 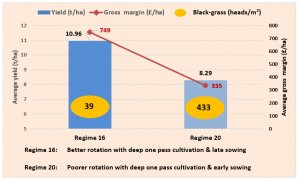 “As well as a legacy of less black-grass, three years out of winter cropping ahead of the first wheat left the ground in a much better state than the all-winter crop rotation,” observes Colin Lloyd. “So, a single pass cultivation was quite sufficient.

“In contrast, ploughing proved to be a much better strategy in yield, margin and black-grass management terms for the poorer rotation – in creating the best soil conditions for the crop as well as limiting black-grass proliferation.

“That late sowing again proved much the best yield and margin-earning approach in both rotations and every soil management regime is almost certainly due to more than just its black-grass limiting value.

“The greater time delayed drilling (and indeed spring cropping) gives us to help soils recover from the past season is something we need to be particularly aware of this autumn. After all, the disappointing 2014 winter wheat performance seen by growers who failed to deal with the structural damage of the really wet 2012 winter is not something anyone wants to repeat.”

To avoid this Colin Lloyd is adamant that wherever there is any doubt about soil structure this season, growers need to check their ground out with a spade and allow sufficient time to correct any damage under the best possible conditions head of autumn drilling.

“It’s vital to get the soil right before we move on,” he insists. “In our long-term Stow Longa cultivations trials we saw an 8.23 t/ha milling wheat yield difference between the best and worst establishment regimes in 2014. And the difference in black-grass levels between them could account for 0.5 t/ha at most.

“Where we restructured the ground adequately in the autumn of 2013, allowing sufficient time to do so under the right conditions by drilling at the end of October, we brought in 12.77 t/ha. In contrast, where we strip-till drilled a month earlier with no effective cultivation we harvested just 4.54 t/ha.

“With good returns so important next season, it’s vital we have enough wheat drilling patience this autumn. The extent of last winter’s soil damage is all too evident in the patchiness and variability of so many spring crops. Metal at depth is the only way we can repair this. And we need the right metal at the right depth under the right soil conditions if we are not to do more harm than good here. For which, our critical need is sufficient time.”
Stow Longa also has some valuable intelligence for those unwilling or unable to delay their winter cereal drilling until mid-October. Many years of work with hybrid barley and, more recently, rye – for both AD and grain – clearly shows the superior rooting ability of these crops makes them much better able to deal with difficult ground conditions. They have also proved significantly more competitive against grassweeds.

“We have averaged 10.18t/ha from hybrid barley drilled into ‘challenging’ soil conditions in late September for a gross margin of £983/ha,” Colin Lloyd notes. “Drilled in the same way alongside it on the same day, a top milling wheat delivered 6.73t/ha for a margin of £557/ha. And with a black-grass population of 157 heads/m2 against the barley’s 28 heads/m2.  Enough said!”