Hannah Arnold, daughter to Ralph of H&J Arnold a Warwickshire-based Agrii customer, volunteered as a Project Manager in a remote community in Nicaragua with the youth charity Raleigh International. Here she writes about her experience. 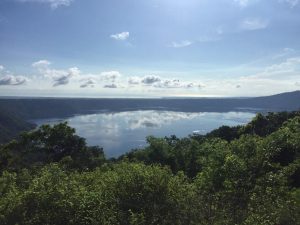 View of the jungle and Laguna de Apoyo, East Nicaragua

Who are Raleigh International?

Launched as Operation Drake in 1978 by HRH Prince Charles and Colonel John Blashford-Snell, the venture was initially dedicated to scientific exploration and community service. As young volunteers began to participate in projects across the globe, the organisation evolved into Operation Raleigh in 1984 and finally into Raleigh International in 1992. Although constantly adapting to new challenges, Raleigh’s focus remains on empowering communities to develop sustainably and inspiring young people to create positive change in the world. Today Raleigh operates in Nicaragua & Costa Rica, Tanzania, Nepal and Borneo. 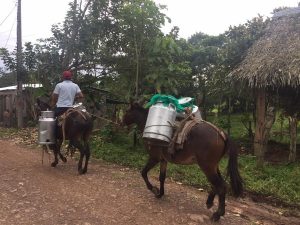 Nicaragua is the second poorest country in Latin America, after Haiti. The country is so lacking in water and sanitation infrastructure that the government completely cuts off the water supply to major towns and cities almost every other day – without warning and often for days at a time. In line with the UN’s Sustainable Development 2020 Goals (following on from the Millennium Goals), Raleigh helps to establish and co-manage Water, Sanitation and Hygiene (WASH) projects in rural communities across Nicaragua, with a major focus on sustainability.

Why the focus on youth? 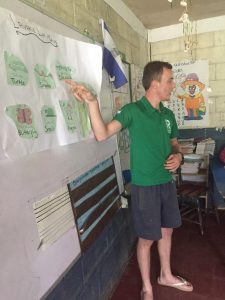 Raleigh believe that young people have the energy and enthusiasm to trigger tangible change, to influence older and more conservative generations and to carry forward positive habits into the future.

I managed a team of young volunteers aged 17-24 who came from all over the UK, The Netherlands, Belgium, Germany, the US, Australia, Nicaragua and Costa Rica. We were based in a small community called Martin Centeno which comprised approximately 50 homes in central Nicaragua, about 7 hours’ bus journey from the capital Managua. 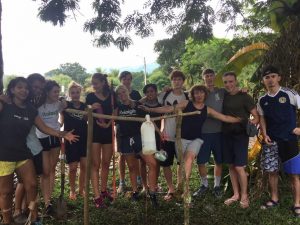 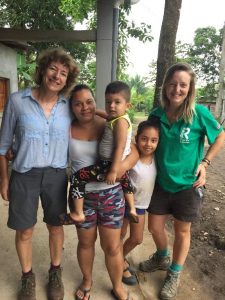 Myself and co-manager Sally-Anne with our wonderful host family

Volunteers ate and slept with families from the community, living on the staple Nicaraguan diet of rice, beans and plantain for the duration of the project. We washed from buckets of water collected from the frequent rainfall, which were also used to ‘flush’ the long-drop latrines and wash hands. The boundless warmth and generosity of the host families was a deeply humbling experience; we were welcomed as if we were their own and often parents and children crammed into the same room so that our volunteers would be comfortable. Dogs, pigs and geese wandered freely, and there was certainly no need for our 6am alarm clock with the community cockerels announcing their authority every morning.

What did the project consist of?

Our particular project had several dimensions:

Clean Water
Our volunteers divided into three teams and worked side-by-side with men and women from the community every day to dig a metre-deep trench for a completely new pipeline from the water tank a mile outside the community. 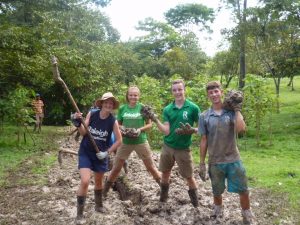 This would ensure that every house had access to clean water, and that it was available throughout the day rather than just for a few hours as in some communities. Houses ranged from basic wooden huts with earthen floors to concrete dwellings (that even enjoyed sporadic electricity). Conditions were extremely hot and humid, and after with daily torrential downpours, the clay-based earth became as sticky and heavy as concrete, so the volunteers had their work cut out! 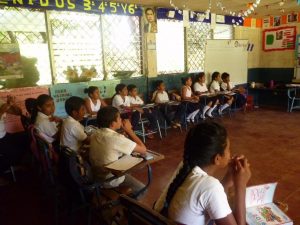 Children learning during a lesson run by the volunteers in community

Education
Each day the two small community primary schools invited our volunteers to spend time teaching pupils aged 6-12 everything from positive hygiene habits to their first words of English. Volunteers used songs, games and colourful artwork to emphasise the importance of handwashing and maintaining good hygiene in the home to prevent the spread of infection. This was also a great way for our ‘host country’ volunteers to teach their peers some key Spanish phrases!

Action Days
The really fun part of the WASH project! Raleigh’s Action Days aim to engage the entire community – from children to grandparents – and to raise awareness of key issues affecting individuals and their environment. Our volunteers spent time planning activities and delivering hand-written invitations to every dwelling in the community. 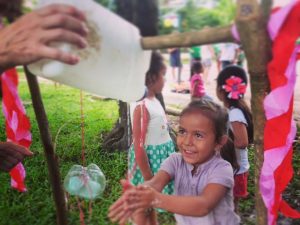 Our first Action Day focused on preventing the spread of infection via hand hygiene. We taught the simple construction of ‘tippy-taps’ (three wooden sticks, a plastic jerry-can, wooden foot-pedal and soap on a string: a gravity-led way to wash hands without re-contaminating them) accompanied by music and games where children made the form of animals with their hands encouraging them to thoroughly scrub their fingers, palms and wrists. It was so delightful to see the children days later washing their hands outside their homes and chanting the animal names to each other. 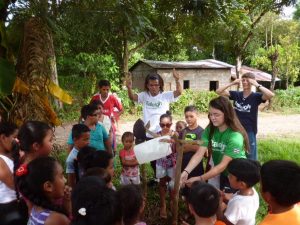 Our second action day raised the question of waste disposal and recycling within the community. Despite the existence of a small village shop, there was not a single bin, no organised refuse collection, nor any concept of recycling despite huge volumes of plastic consumed by inhabitants (in particular Pepsi bottles). So what do you do with your rubbish in Martin Centeno? Toss it over your shoulder! Or out of the bus window. Or at the bottom of your garden. The community was a lush paradise of palm trees, tropical flowers and enormous butterflies, but drowning in litter. Whilst recognising that this was a very long-term project to undertake, volunteers took charge of initiating the conversation about the responsible management of rubbish. Children took part in a wildly successful ‘litter pick race’ (screams of joy as countless bin liners were filled to brimming with community litter in under 10 minutes), before volunteers taught about the difference between organic and inorganic waste and unveiled their hand-constructed community bins made entirely from wooden sticks and empty Pepsi bottles. 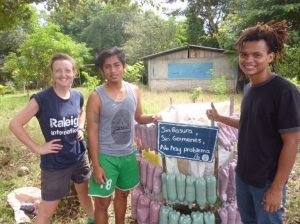 Myself with two Nicaraguan volunteers James and Edmin, showing off the new community bin build from plastic bottles and wooden sticks

I have been extremely proud and fortunate to be part of this project. Raleigh is a very worthwhile organisation aiming to shape the moral compass of today’s young generations by giving them ownership of development projects that improve the quality of life in some of the most impoverished communities in the world. As a farmer’s daughter, I also found it to be a stark and poignant reminder of how fortunate we are here in the UK to access fresh quantities of clean water from the taps in our homes, and the important of conserving our environment for all the future generations to come.