This is clear from in-depth Agrii research into a raft of ‘biological opportunities’ over more than a decade. Equally clear from this work is the fact they will only be valuable given a far greater understanding of their particular place and limitations than most people have today.

“In recent years we’ve seen an explosion of biologicals of every description coming onto the market,” says Agrii head of technical, Clare Bend. “They come from a plethora of companies, make many and varied claims, and do so with highly variable degrees of scientific rigour. What’s more, there’s no official approval regime to help sort the wheat from the chaff.

“This is exactly what we have been trying to do across our research network. And I have to say our results have been decidedly mixed. At the last count, we have trialled almost 130 different products, of which we think around 30 might have some sort of place. But even with these it’s important not to expect the levels of across-the-board benefit we have become accustomed to with conventional chemistry.

“After all, as biological products, they are much more dependent on environmental conditions than chemistry. So, the key to getting the most out of them is to pinpoint exactly where in the cropping regime and under what conditions they are likely to deliver best. Which, in turn, means developing a better understanding of their complex and rapidly evolving science.”

Excluding bio-pesticides, bio-fungicides and bio-adjuvants, Clare Bend and her colleagues divide the most promising bio-solutions with the potential to enhance plant growth, nutrient utilisation, tolerance to environmental stresses and pests & diseases and/or crop quality into three distinct categories – endophytes, elicitors and bio-stimulants (Table).

“We are taking a thoroughly evidence-led, ‘what works’ approach to our investigations,” Clare Bend explains. “We use laboratory screening and glasshouse testing to narrow down the field of potential bio-solutions. This allows us to concentrate field trial work on those showing the most promise to establish if they offer reliable improvements in crop performance, positive returns on investment or valuable contributions to IPM.

“At the same time, we are putting considerable time and effort into understanding why they work as well as what they do. We see this as essential to using them in the most effective ways possible.”

Of the massive DNA-profiled library of symbiotic fungi and bacteria the project has so far isolated from wild wheat relatives growing in a range of stress situations, a number have shown valuable control over fusarium and take-all in the glasshouse. The most promising of these are now being explored in Agrii field trials, backed by X-ray CT scanning to measure any bio-stimulatory effects on rooting and the like. At the same time, a team is exploring how best to upscale them for commercial farm use.

Agrii investigations into elicitors are even more advanced, with the best – Iodus (laminarin) showing encouraging potential as a chlorothalonil replacement at T0 in two years of field trials. Already fully registered in the UK as a ‘plant defence natural stimulator for the control of a range of diseases in winter wheat’, this brown algal derivative has been shown to boost cell wall lignification and other mechanisms which arrest the movement and progress of Septoria tritici, mildew and possibly also rusts.

“Iodus acts systemically to switch on plant defences, sensitising new as well existing growth so it responds more rapidly to attack,” notes Clare Bend. “This makes it a good option for early season use.

“Our work shows very useful reductions in summer Septoria levels from T0 applications but no statistically significant yield benefits when used alone. Much more interestingly, though, it gave us the same 0.5t/ha yield improvement over untreated controls as chlorothalonil in a triazole-based T0 (Figure 1). This suggests real promise in the post-CTL world.

“We have been exploring this opportunity in more depth in the past season to establish the conditions under which Iodus is likely to be most effective, possible synergies with other chemistry and the best timing – T0 or pre-T0. Stimulating wheat disease resistance reliably early-on would be really valuable in taking the pressure-off subsequent fungicides and protecting emerging new chemistry without recourse to a multi-site.”

While work on endophytes is in its infancy and there remain relatively few elicitors on or near the market, the proliferation of bio-stimulant products available in recent years makes detailed evaluation and understanding especially important here.

All the more so with such a vast array of materials on offer – from inorganic compounds, amino acids, complex organic molecules and anti-transpirants to plant growth-promoting bacteria, arbuscular mycorrhizal fungi, protozoa and nematodes.

Agrii’s first step in narrowing down the field of both microbial and non-microbial bio-stimulants is extensive laboratory screening to identify those that actually increase levels of key antioxidants like chlorophyll b or enzymes such as peroxidase important in breaking down the damaging free radicals produced by plants in response to stress.

Glasshouse testing is then employed to measure the effects of those showing promise – either directly in activity against diseases or pests, or indirectly in cell wall thickening or other stress-reducing mechanisms.

“Unfortunately, even products initial work gives us sufficient confidence to enter into our field trials programme don’t always deliver performance improvements, let alone worthwhile returns on investment when we do, “Clare Bend reports. “Of the seven bio-stimulants we trialled in a high stress bone dry spring where we expected to see the greatest benefit, for instance, only one gave a statistically significant yield response.

“Interestingly too that was the product we’ve seen most success with in trials and commercial practice over more than a decade now – Nutri-Phite PGA. A yield benefit of 0.45t/ha and return on investment of £57/ha in this trial on top of all the other evidence we have underlines the value of the right bio-stimulants used correctly (Figure 2). 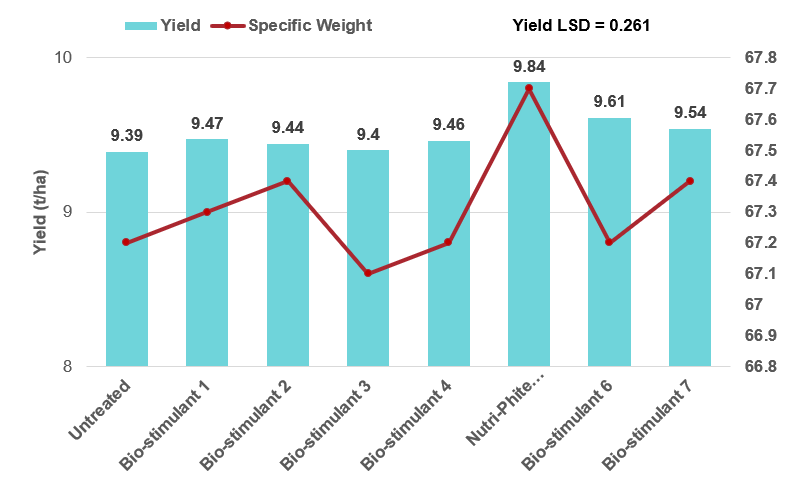 “As well as improving plant health, vigour and nutrition, we have found Nutri-Phite PGA’s combination of organic acids and phosphite valuable in reducing phyto-toxicity and increasing disease resilience.

“Equally well-tried and tested in our work are humic acids as the base for key micro-nutrients like manganese, zinc and magnesium,” she adds. “They improve nutrient uptake, enhance levels of chlorophyll and give better tolerance of environmental stresses like drought.”

With tebuconazole set to come under threat in the coming few years and the need to protect prothioconazole from resistance development, the R&D team sees a good role for the extra disease resilience appears to give by boosting the enzymes involved in cell wall thickening. As well as in further OSR trials, Curative is being evaluated side-by-side with Nutri-Phite PGA in wheat this season.

Two further products proving promising in the trials are titanium-based, Tytanit alongside T1 and T2 fungicides in wheat, and amino acid-based adjuvant, Zonda for late-season PGR safening in barley.

“Our experience with all three of these underlines that making the most of bio-stimulants fundamentally depends on using them in the right place at the right time,” stresses Clare Bend. “Which, more than anything else at the moment, means supporting rather than replacing traditional chemistry in specific applications.

“Like Curative in OSR, Tytanit has given us encouraging increases in wheat performance in our disease management programmes. It hasn’t been able to boost the performance of a weak two-spray fungicide programme to that of a strong one but in both regimes across six trials over two years it gave very worthwhile 0.2-0.3t/ha yield improvements.

“Zonda, on the other hand, looks like being an even more tightly-targeted tool. We’ve found it allows a PGR to be safely applied to moisture-stressed barley at GS37-39 to guard against the serious brackling resulting from a massive surge in late-season growth if conditions turn wet. As such, it seems to provide a convenient solution to the ‘should I/shouldn’t I’ spray dilemma many growers have faced with both winter and spring barleys of late.

“As much as proving whether or not specific bio-stimulants could have a place in modern crop production, our work is geared to establishing exactly where that place should be,” she concludes. “The understanding we are developing of particular products through the country’s most comprehensive bio-solutions evaluation programme is designed to ensure growers get the greatest value from them at the least possible risk.”