No-Till Contract Farming Recipe Proves Its Worth on the Cotswolds

Diversity, flexibility and capacity are the cornerstones of the successful no-till contract farming business built by Toby Baxter for a growing number of landowners on the western edge of the Cotswolds over the past decade.

He and his Agrii agronomist, John Vickery have never been afraid of doing things differently. That’s why around half their first cereals are no longer wheat; they routinely employ double cereal breaks and four-year herbal leys; year-round soil cover is their standard practice; and all their cropping is closely integrated with both beef and sheep enterprises.

More than 10 different combinable crops are routinely grown across the 1400 ha of ground between Winchcombe and Wotton-under-Edge currently being farmed in joint venture contracts. These are complemented by a wide range of forage and cover crops, all supporting extensive beef and sheep grazing.

This diversity, a highly flexible rotational approach and sufficient machinery, seed and grain handling capacity give both the land and business the greatest ability to cope with changing environmental and economic conditions.

“Building resilience is our whole focus,” insists Mr Baxter. “For the most part, we’re not on 10t/ha-plus wheat land here. But we’ve found we can generate reliable margins from even the thinnest, stoniest ground with the right approach.

“We went into no-till on our first 380ha contract farm near Tetbury in 2012 and it hasn’t been without its challenges. But we prepared the way with min-tilling and were guided by the expertise of no-till specialist, Steve Townsend. So, the mistakes we made were manageable. 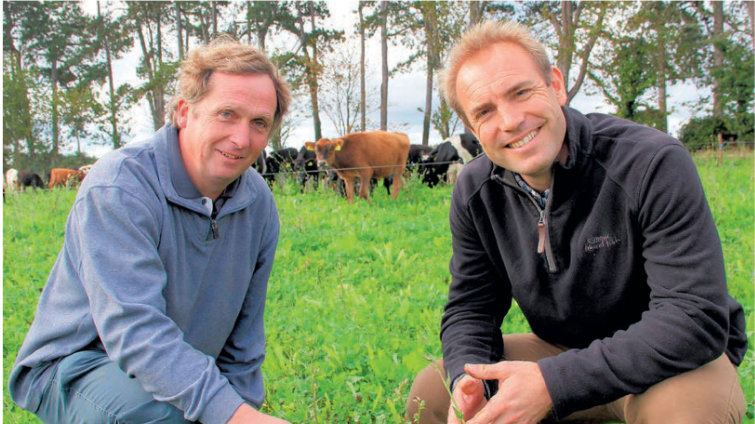 “The biggest lesson we’ve learnt is never to go on the land when the conditions aren’t right,” he says. “No-till definitely improves the health and carrying capacity of the ground. But it’s a long-term business. And because you’re only working such a small amount of the soil you have to give the land time to dry out on its own after rain. Which means sufficient flexibility and capacity so you never drill before its ready. Otherwise most of your management is fire-brigade.”

To ensure the flexibility they need, Toby Baxter and John Vickery have abandoned the idea of fixed rotations. They have an overall plan, but what is grown each season is dictated by the weather, more than anything else.

Having their own facilities mean they can clean and dress seed the day they drill. So, they never have to worry about leaving ‘pink seed’ in the shed. Equally, having two different drills means they can choose either tines or discs to suit the ground conditions.

For high capacity tine drilling on the bulk of the land, the 15m Amazone Condor has proved its worth, enabling as much as 125 ha to be sown in a day with a 230 hp tractor even at a restrained 4-6 kph to minimise soil disturbance and maximise planting precision. Where discs are better – such as for drilling into denser covers on the green or herbal leys – the 6m John Deere 750A also does an excellent job with a similarly low horse-power requirement.

“What we grow where and when depends on the conditions,” Mr Vickery emphasises. “Having three winter cereals (winter wheat, winter barley and triticale), three spring cereals (barley, oats and naked oats) and five break crops (winter OSR, winter and spring linseed, peas and beans) to choose from means we don’t have to force crops in when we really shouldn’t be on the land.”

“As we’ve gained experience with them, we’ve also been able to adapt and flex our cover crop growing and management to suit the season and the opportunities that present themselves.

“Ahead of spring barley, we still use the stubble turnips we’ve long found valuable for winter sheep feeding. But we now tend to mix them with linseed for its mycorrhizal activity and the structural support the woody stems give the soil during grazing.

“We’re growing a lot more rye these days too – mainly ahead of spring break crops. It’s a great feed for cattle and sheep. And we can drill it later in the autumn than the turnips.”

“By chance, last season when the deluge led us to replace winter wheat after OSR with spring naked oats, we found the volunteers left from the previous crop did the sheep really well. So, we’ve deliberately drilled some rye, linseed and vetch into them this autumn to make what we hope will be an even better winter fodder at very little cost.

“We will again be following this with naked oats grown on contract for GB Seeds,” he says. “At £50/t over feed wheat, the 5t/ha-plus we brought-in from a conveniently late sowing in April delivered a margin as good as an 8.25t/ha thin land first wheat. And we can follow them with wheat if we want to.”

Also stacking-up well against wheat as a first cereal for the business is winter barley, either as a seed crop for Agrii or Maris Otter for the brewing trade – around100 ha of each are grown on contract every year. Both give a good early entry for stubble turnips ahead of spring cropping.

Triticale, for local animal feed markets, comes into its own as a second, or even third – cereal in the regime too. It has been found to do well from early October drilling after a six-week mustard/phacelia catch crop and be highly competitive against black-grass as well as earlier to harvest than wheat. It also leaves a long moisture-conserving and flea beetle-confusing stubble nursery for OSR or stubble turnips.

Undoubtedly the single most crucial ingredient for success has been getting livestock back into the arable rotation in a substantial way. As the business has grown, greater reliance has been placed on forage breaks as well as cover crops both for an expanding sheep flock and a New Zealand-style, year-round grazed beef enterprise recently developed.

“Grazing cover crops adds to their value considerably,” Mr Baxter points outs. “It provides a timely injection of extra fertiliser-saving and soil-improving fertility while decimating any slugs. It also allows us to turn arable challenges into livestock opportunities.

“For instance, around 1.5t/ha of grain was knocked out of 55ha of a conventional oat crop we were growing for seed last August. But the thick sward this produced gave us excellent autumn finishing for 500 lambs ahead of our next crop – either late-drilled wheat or spring barley depending on the conditions.

“These opportunities aside, it’s the forage breaks we see as our most valuable asset. Four-year herbal leys are proving especially useful in supporting first class beef and sheep performance and a fantastic arable break on some of our most demanding ground.

“They’re like walk-in concentrates for lambs, allowing us to finish more than 700 from a single 23ha field this autumn. What’s more, a first wheat after a herbal ley out-yielded the same variety sown on the same date alongside it after a normal arable break by 1.75t/ha. Add the fact that the leys enable us to safely sow wheat into previously problematic black-grass ground in September and generate very useful Countryside Stewardship payments for their biodiversity and landscape contribution and what’s not to like?”

In addition to the herbal leys which are also perfect for the younger beef stock, Toby Baxter and John Vickery are currently introducing a two year fodder beet and Westerwolds ryegrass break into their regime for winter grazing.

A 40ha block of fields have each been divided in two, with spring-sown beet on one half and ryegrass under-sown into spring barley on the other. These will be carefully strip-grazed over the winter and the plantings swapped over for the second year. They will then go back into the arable rotation in the third spring, profiting from a vast amount of muck as well as a good clean break and having finished a total of 180 beef animals and wintered a further 180 youngstock.

This latest innovation typifies their determination to make the very most of the synergies between crop and livestock production progressively lost over the past 50 years; synergies they firmly believe will be increasingly important to the sustainability of many farming businesses on more marginal arable ground in the future.

“The addition of livestock as well as sufficient cropping flexibility and diversity is essential to our no-till recipe which, in turn, is essential to supporting the most cost-effective outdoor stock production,” Mr Baxter observes.

“Modern joint venture contract farming arrangements have enabled our business to exist and the stock give us the cash flow we need to make it work. Our approach also nicely meets the needs of partners who want to see their land farmed sustainably as well as profitably.”

“Re-establishing the value of mixed farming like this can only happen with sufficient capacity and scale, though,” adds Mr Vickery. “Technology can help. But fundamentally you can only get the flexibility you need with enough men, machinery, facilities and, of course, teamwork. The recipe developed here certainly won’t suit everybody, but I defy anybody not to learn something valuable from it.”