“You don’t need to prove the technology to me. In fact, I was totally gobsmacked to be asked to take part in Digital Technology Farm trials – I can’t understand why everyone isn’t using it,” he says.

Flamstone Farms consists of 285ha on Salisbury Plain, with another 252ha farmed on contract. The nature of the area means John’s average field size is 40ha, but they’re far from uniform – soil type varies from light chalks with clay caps on the hills and ridges to richer, calcareous soils in the valley bottoms, all with a high flint content. Most fields span the complete range. 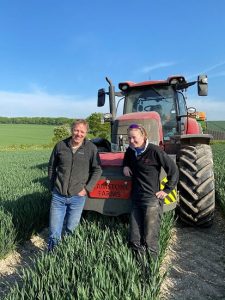 “It was always obvious from the combine cab how much the crop varied,” he recalls. “So, we were one of the first farms to map the soils and put them into management zones under the system developed by the Courtyard Partnership, around ten years ago.”

The move was led by Agrii agronomist Peter Gould and the system is now part of Rhiza. “The zones follow the properties of the soil much more closely than the traditional grid method of managing in-field variability – it’s a system ideally suited to the soils prevalent across Wiltshire, Berkshire and Hampshire,” he explains. “John has up to 12 zones in a single field spanning five distinct soil types.”

The zones are set out within Rhiza and Peter varies the intended seed rate according to the soil properties within each zone. “The crop won’t tiller as well on the shallower chalky soil, and establishment isn’t as successful on the clay caps. So, in these areas we’ll raise the seed rate – typically by as much as 30% compared with the deeper, calcareous soils.”

The same zones are then used to vary nitrogen inputs. “We know that N is less efficient on the shallow chalks, so the rate is tailored accordingly. We use the satellite imagery provided through Rhiza to do this – one of its useful aspects is a chlorophyll map that shows up as lighter green the chalky areas that haven’t taken up as much N, where rates are raised. Depending on the time of year, the deeper soils may have more available N, so applications can be reined back,” he explains.

“Towards the end of the season we may reverse this, so feed more N to the richer soils where the crop is thicker to ensure there’s enough N to feed the higher anticipated ear count.”

The difference is obvious, says John.
“The first thing I noticed is how the crops have evened out across the field. Average yields have also increased to around 11t/ha for wheat – I’ve been amazed at the results.”

“It’s very easy to use the Rhiza on-line toolbox to get the latest satellite images and create the application maps. We’ve had no problems with connectivity or compatibility with our equipment. Our main operator, Clover Crosse, who joined us recently, got up to speed in no time – she finds it even easier to use the technology than I do,” says John.

“But it’s essential to have the interpretation from an agronomist. The advantage with Peter is that he knows the system.”

Peter has been recommending the zonal management system available with Rhiza for many years. “Typically growers start by using it to vary P&K inputs and find the savings pay for the work done in setting up the zones in just one year. When varying seed rates and fertiliser, it’s important to ground truth any in-field variation – Rhiza makes this easy because you can bring up maps on your phone and pinpoint where you are in the field.”

He’s keen that Flamstone Farms takes part in the DTF trial because he believes it will give a very clear illustration of the benefits. “I’ve been recommending the system for years, and have seen many farmers benefit, but there’s been very little trials works to quantify this,” he notes.

So across three tramlines in one 17ha field, the seed rate of KWS Zyatt winter wheat has been varied from 142.5kg/ha to 185.25kg/ha. The rest of the field has been drilled with a flat rate of 160kg/ha. “All fertiliser has been applied at a flat rate and other nutrients have been applied according to tissue test results to take out any other variation and ensure it’s purely the effect of varying the seed that we’re monitoring in the trial,” adds Peter. 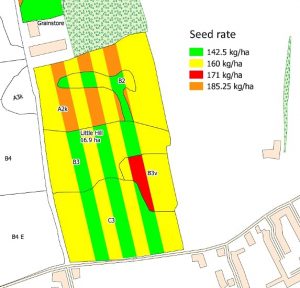 With three tramlines, it’s a replicated trial, while plant and tiller counts will add to the tissue testing in what he hopes will build into a valuable dataset. Yield data from the combine will be passed through the ADAS Agronomics model which delivers statistical confidence to on-farm trials. “The trial will not only confirm we’re doing the right thing, but should give us a bit more information on exactly how much we increase or decrease the seed rate,” he notes.

John’s confident the trial will confirm the benefits he’s already enjoying. “Greater automation has got to be the way to go to manage my in-field variability. If only this technology could take out weather variability, we’d be sorted.”