Seven of the most modern oilseed rape establishment systems from six different manufacturers were put through their paces in a single 30 acre field at Chillington Estate, Codsall near Wolverhampton in a special Agrii OSR demonstration day this month (August 12).

All were sowing DK Expower at 50 seeds/m2 into a freshly-harvested wheat stubble with plenty of surface trash, demonstrating their ability to cope with typical West Midlands conditions to the estate’s arable team and visiting growers from across the region intent on improving OSR establishment.

But there the similarity ended. From simple subsoiler seeding to power harrow and direct drilling, almost every conceivable combination of discs, tines, coulters and packers was on display in its working clothes. And while all seemed to deal with the favourable sandy loam ground conditions on the day equally well, the contrast between the degree of surface soil disturbance produced was phenomenal. 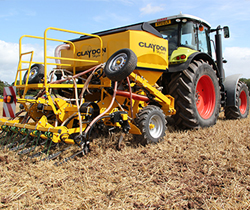 On the one hand, the Opico HeVa subsoiler left the stubble surface virtually intact, with the Claydon Hybrid and SUMO DTS systems also giving less in the way of surface effect. On the other, the Lemken Solitair power harrow drill produced a not far short of traditional seedbed surface with the Vaderstad Top Down and Spirit, Simba DTX and Lemken Karat systems also leaving significantly more disturbed stubble finishes.

“What we need more than anything else here at Chillington is a fast establishment system that combines the sub-soiling we insist upon before rape with sort of quality seedbeds we get from our current plough and power harrow/drill combination,” pointed out the estate’s Agrii agronomist, Peter Jones.

“With all the game birds and pigeons we have – not to mention the flea beetle challenge from the large acreage of stubble turnips grown for the sheep enterprise – getting our rape off to the best possible start is crucial. And because it invariably has to go in after wheat in the rotation, time is of the essence.

“We’re very open-minded about what sort of system would suit our conditions best. Whatever it is, though, it must allow good water movement through the soil, eliminate any barrier to root penetration and give first class soil to seed contact. 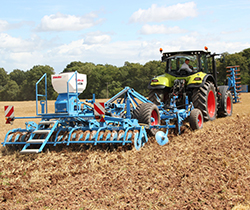 “Less surface disturbance may help our weed control,” he agreed. “But, more than anything else, our key priority is the fastest, most even crop establishment and, of course, the best performance.

“Across all the regimes we’ve used the robust, fast-developing hybrid, DK Expower that has done us so well here this past season, sown at our preferred seed rate. We’re following-up all the systems with precisely the same agronomy through the coming season. We’ll be monitoring how well each area establishes and then recording yields from the individual blocks to give us the best overall assessment of how the systems really stack-up. It promises to be a very interesting exercise both for us at Chillington and for other growers across the West Midlands.”

The Establishment Systems at a Glance