It’s time for science to take the potato forward

The way in which we grow, and store potatoes is changing dramatically, but there is no time to be nostalgic. Nick Winmill a Crop Scientist with more than 35 years of experience in agronomy considers some of the changes still to come.

Such has been the rate of change in potato production in recent years that I am reminded of the opening line of L.P. Hartley’s first novel, The Go-Between.

“The past is a foreign country: they do things differently there,” seems incredibly apt for our times. It could, of course, be applied to just about any situation, at any point in history, but given the loss of products in recent years and the way in which technology has the capacity to usher in a new era of production, there could scarcely be a more apt metaphor to describe the rate of change in our industry. 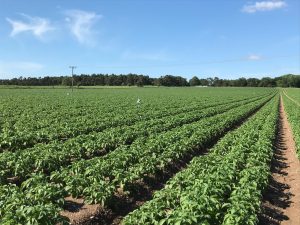 The loss of trusted chemistry for potato crops

For the past few years, discussions have been dominated by the loss of the sprout suppressant, CIPC and the impending withdrawal of the ever-reliable multi-site fungicide mancozeb. While the latter may have been given a technical reprieve – at least for those in Great Britain – due to the timing of the European Union’s decision, it is clear that we can no longer count on its long-term availably either as straight or in a mix.

The sudden withdrawal of Vydate (oxamyl) at the start of the year only served to add to the sense of despair among growers already reeling from a difficult season in 2020. The uncertainty surrounding the widely used herbicide metribuzin, which is likely to be withdrawn no later than 2024 as is another nematicide, fosthiazate, (as in Nemathorin), further emphasise the rate of change.

Responding to change and new opportunities

How we as advisers and in turn, you as growers, respond to the disruption this inflicts on your business should, of course, be the focus of our thoughts. And it is; and has been for several years. Our research and development trials have considered these issues and more for some time, but finding solutions is only part of the equation: they must also come at a reasonable cost.

As a direct replacement for mancozeb we have been trialling, amongst other substances, potassium phosphonate, both as a straight and in mixes with other products. This is not yet on the market and further work is needed to validate its performance, but there is reason to be confident that there are solutions to this conundrum.

The uncertainty over the regulatory status of mancozeb and its market availability in GB has highlighted another issue: what is the extent of early blight (Alternaria spp.) with reduced sensitivity to certain fungicides, how are we to collate this data, and who is going to pay for it?

Much of our understanding is based on what is happening across continental Europe with Germany and the low countries of Belgium, Luxembourg and the Netherlands providing most of the information. We know little of the situation in the UK, do we have the strain resistant to boscalid (as in Signum) that is reportedly widespread across Europe, for example? Without accurate data we cannot make informed decisions.

Using the best biological products to bolster our armoury

Other areas of intense research involve the contribution biological products can make to crop protection. These are undoubtedly part of the future – new authorisations now outnumber those for conventional products – but real-world performance does not always match that claimed. Identifying those that show the greatest promise and finding out how best to exploit it, remains a work-in-progress.

One way in which biologicals can make a valid contribution is to preserve the performance of conventional fungicides. Strobilurins, for example, are susceptible to sensitivity shifts but it may be that we can delay this falling efficacy with biological products while staying within FRAC guidelines for application limits.

The need to reduce pesticide use will also drive bigger changes. At some point society will need to accept that plant biotechnology is a force for good. The government has recently taken the first step on this path with a public consultation on the role of gene editing such as that enabled by the CRISPR-Cas9 system. This is not biotechnology in the old sense, but the next evolution in plant breeding that has been practiced since Gregor Mendel crossed two pea plants to create a line that was superior to its parents.

The Covid pandemic has raised everyone’s appreciation for science and its potential to enhance our lives, it’s time to seize this opportunity and bring food production into the new millennium.