Carefully-planned and determined management by a specialist Agrii team from the UK has transformed 2000 ha of Sudanese desert into productive arable land producing wheat, alfalfa and maize to supply intensive livestock units in Saudi Arabia and the United Arab Emirates.

Under the direction of head of consultancy services, Paul Pickford the nine-strong Agrii team took up the challenge of progressively bringing land never previously farmed on the 20,000 ha project five hours north of Khartoum into production from May 2011.

Although already served by £40 million of infrastructure – including a purpose-built Nile pumping station, 35 km of supply canal and a large pivot irrigation grid – the project had previously failed to get off the ground through lack of understanding, management expertise and equipment maintenance.

“The place was a real mess when we arrived,” Paul Pickford recalled. “As well as a huge engineering challenge, we faced a major task in turning badly compacted desert into land fit for crop production. So we concentrated our initial resources on 2000 ha, deep ripping the ground, sub-soiling it and hand-picking rocks and stones twice before finally ploughing, discing and eventually planting. At the same time, we dredged the badly silted-up canal and brought sufficient of the irrigation equipment up to scratch.

“With temperatures of up to 45-50oC, it was essential to fill the soil profile with water before planting to ensure adequate rooting, then to provide up to 25mm of water each day during the growing season to maintain crop growth.  So we couldn’t afford to have the irrigators out of action for much more than a day or so at any stage. This meant constant attention to the water supply.”

Notwithstanding these challenges, the team’s expertise and commitment delivered an average 1000 ha first year wheat yield of 3.65 t/ha against an initial target of 3.5 t from minimal inputs – with the exception of water, of course. It also allowed nine 1-1.25 t/ha harvests of lucerne to be secured in the year, earning over £200/t in the thriving export market. 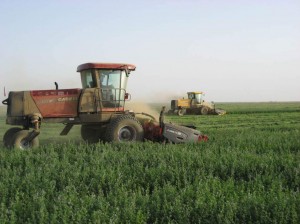 “We’ve managed to establish an excellent base for future development here, demonstrating the real strength in depth of our crop and engineering management expertise,” reported Paul Pickford. “With the right varieties and management, I’m sure 7 t/ha wheat crops will be perfectly possible over an extended period.  And extra land can progressively be brought into production to serve the strong market for animal feed in the Persian Gulf.

“This success is standing us in extremely good stead in developing a number of other big contracts in the region, providing valuable opportunities for UK managers, engineers and support staff.”