Agrii Maps the Way Ahead ! - Agrii - Connecting Agri-science with farming

Agrii Maps the Way Ahead !

As part of a consortium of commercial businesses and academic partners, co-funded by the Technology Strategy Board, Agrii is driving an innovative research and development project to study the potential of bringing automated weed mapping to arable fields.

Many important arable weeds occur in patches and could be managed in a more targeted way by  precision farming. This could help farmers reduce treatment costs by targeting applications, reduce the quantity of active ingredients applied to the environment and allow early detection of herbicide resistance. Current technologies for weed mapping are either time consuming and/or unreliable and farmers could welcome an automated system.

The ‘EyeWeed’ project was started in October 2010 and is due to be completed in September 2014. The study is building on earlier proof of concept work carried out at Reading University with black-grass (1). The aim of the project is to develop a pre-commercial GPS linked computer controlled digital camera system, mounted on farm machinery, to map and geo-reference key weeds, in particular black-grass.

Digital images of black-grass are captured at the flowering stage when the heads are visible above the wheat crop canopy in mid June to early July. Current technologies do not allow accurate identification of black-grass from wheat or barley at the early tillering stages. Once the geo-referenced images are captured they are processed by a series of software algorithms to produce a map showing the density and position of the black-grass patches. The data that makes up the weed map can be imported into a mapping program such as GateKeeper to produce a spray application plan. For the EyeWeed project, the process from data capture to producing an application plan is in many ways similar to the steps we go through to end up with variable application maps for P/K fertilisers in the SoilQuest system. 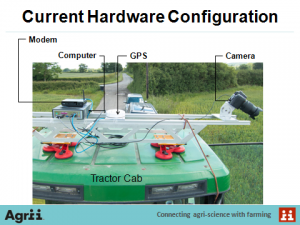 During 2011 we made some limited progress with a new hardware platform and made further improvements to the software algorithms. In 2012 we changed to a hardware system as shown in the figure, but June and July were a wash-out and on many heavy land fields we could not capture good images.

In 2013 we will be testing a new hardware system comprising four forward facing cameras mounted on the sprayer boom. In the autumn we will be using the weed maps to generate herbicide application plans to patch spray black-grass and then in the winter go on to evaluate the efficacy of our treatments based on the weed maps.

Agrii is leading this project and is responsible for administering the work packages and preparing various reports. We are heavily involved in generating weed maps and visually ground truthing the camera captured images. We will be undertaking a farm survey this summer to get a better understanding of the potential uptake of this technology. We will be raising the profile of the project this year at events such as Cereals and Agriifocus and where possible at other regional events.