Winter oilseed rape grown on light or shallow soils, in particular, could profit from very much higher sulphur fertilisation than indicated in the RB209 fertiliser manual, according to three years of Agrii trials on several southern and south western sites.

Mainly undertaken in Hampshire, Wiltshire and Dorset, the trials show highly worthwhile yield and margin responses from applications of up to 225 kg/ha SO3 (90 kg/ha S). In doing so they underline both the extent to which lack of sulphur is becoming an issue in modern OSR nutrition and the value of extra applications in boosting the efficiency of applied nitrogen.

“We’ve recorded yield increases of around 0.2t/ha for every extra 75 kg/ha SO3 (30 kg/ha S) added at the same nitrogen input,” reports Agrii’s west regional technical advisor, Gary Bosley. “And, like our parallel work with wheat, the response is clearly linked to N level.

“As a rule, tripling SO3 applications from a fairly normal 75 kg/ha to 225 kg/ha has added a good 0.5 t/ha to yields. But we’ve seen responses of nearer 0.7 t/ha at higher levels of N application compared with about 0.2t/ha at lower levels (Figure).

Figure: Response to sulphur at different levels of N (Dorset) 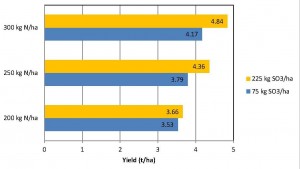 “This is hardly surprising given the close relationship between nitrogen and sulphur in plant nutrition,” he observes. “We know, for instance, that cereal crops typically require 1kg of S for every 12 kg of N, and winter OSR may have twice this requirement.

“We also know OSR requires about 16 kg of sulphur for every tonne of seed yield. Which means 80kg S for a 5 tonne crop.  Under these circumstances, annual applications of less than half this level are most unlikely to be able to sustain today’s 4 t/ha-plus crops. Unless, that is, significant sulphur contributions are available from soil organic matter or, as in the past, through atmospheric deposition.”

He also feels higher than RB209 levels of sulphur should be considered in other situations, particularly  where higher nitrogen rates are being applied.

“The extent to which higher applications of sulphur appear capable of improving yields at
N levels of around 220-250 kg/ha opens up valuable opportunities for make more from existing nitrogen fertiliser investments,” he points out. “At the same time, of course, any yield improvements should allow N-Max constraints to be raised in pursuit of even greater performance gains.

“With extra sulphur typically costing less than the value of 0.1 t/ha of OSR, the results we’re seeing in responsive situations –  often without significant deficiency symptoms – make greater attention to sulphur nutrition well worthwhile for many growers.

“We recommend applying up to 200 kg SO3 in higher risk situations. These are primarily higher yielding crops, light (leachable) soils, where overwinter rainfall has been high, organic matter levels are low or poor mineralisation of organic S is likely. Of course, it’s important to appreciate that, like nitrogen, sulphur accumulates in the crop. So higher GAIs will reduce the need for spring sulphur as well as nitrogen.”

David Langton insists that winter OSR needs to have 50% of its sulphur available as it goes into rapid canopy growth. In addition to greater use of N:S compounds, he regards ammonium sulphate and Kieserite as the most valuable sulphur sources, stressing that the extent and earliness of oilseed rape demand makes sulphate sulphur a far better choice than elemental S.

“To provide better intelligence for our agronomists and growers, we are currently investigating a range of different sources of sulphur, including the new product, Polysulphate, similar to Kieserite as part of comprehensive system studies at our Agrii Technology site at Marlborough,” he adds.