In the right place, catch and cover cropping can noticeably improve the health, workability and resilience of soils as well as making valuable contributions to environmental protection. But to be cost-effective they need to be well-planned and managed. They must also be carefully matched to the available machinery and resources – especially at the outset. And they require patience, persistence and fine-tuning to really deliver the goods.

These were some of the key findings of a four-day, six-county study tour of farms and trials exploring the latest catch and cover crop thinking undertaken by 15 farmer and agronomist members of the Agrii Soils Improvement Group in November. 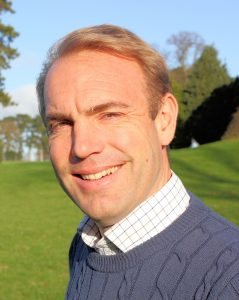 d by regional technical adviser, John Vickery, the tour shared the most up-to-date research, farm-scale trial and commercial farming experience on species and varieties, mixes and agronomy, and opportunities for development.

The fact that it did so in the wettest early winter in living memory brought the need for far greater attention to soil management into sharp focus while highlighting the particular contributions both short and long-term covers can make to it.

“As well as viewing its extensive Agrii cover cropping trials, we saw how one Kent farm was using a stripper header combine to provide the best possible environment for cover crop establishment in addition to more rapid and efficient harvesting,” explained John.

“On another eastern unit we saw how cover cropping as part of a no-till regime was enabling sugar beet to be harvested with little, if any, impact on the soil at a time when no-one else in the area could even think about going on their ground. And on another we looked at the trialling of a perennial clover cover under successive main crops. 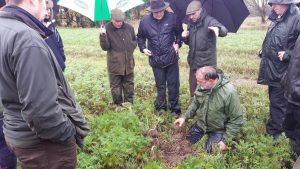 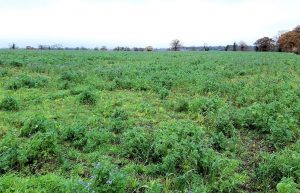 “We also inspected trial plots underlining the major differences in above and below ground growth habit between different varieties of the same species; explored the results of long-term Agrii investigations comparing the value of alternative cover cropping and cultivation systems; and discussed research priorities for improving cover crop management.”

Perhaps the single most important lesson to emerge from the group’s four days of ‘cover crop immersion’ was the need to tailor the selection and management of species and mixes for particular conditions and requirements.

“Spring types tend to be best for the rapid autumn establishment and growth required,” John Vickery reported. “But given enough time and temperature they can easily run to flower and even seed. This will increase the C:N ratio, making them slower to rot down and diverting critical nitrogen away from the following spring crop. It can also create significant volunteer problems.

“The month’s difference we see in the start of flowering between different varieties of white mustard, for instance, can make all the difference here. Those slower into flower tend to be best suited to early establishment on warmer soils further south, while more rapidly-developing varieties are likely to be better for later-sowing, colder conditions and more northerly sites. 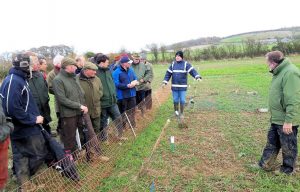 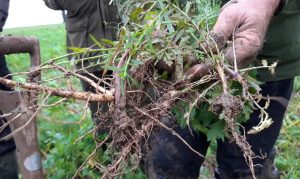 “In the same way, Hungarian and purple vetches are like chalk and cheese in the way they grow,” he added. “So, if you want a cover that’s slower to develop, stays closer to the ground, is more prolific in its rooting and better able to withstand cold temperatures it’s better to choose the former. Alternatively, for the rapid top growth more suited to a shorter term catch crop or OSR companion, the latter is likely to be preferable.

“Of course, you also need to choose components that both do the job you want and work well together. Too much white mustard can easily dominate a mix and out-compete other species. But phacelia’s root architecture does essentially the same soil structuring job and the crop is far less competitive early on.”

Other important cover cropping observations arising from the Agrii study tour, include:

• The wrong mix in the wrong place can be very challenging to deal with;
• Legumes in the mix are valuable in increasing the nitrogen to carbon ratio;
• Slugs can proliferate if soil biology is not sufficiently well-developed;
• Care is needed to avoid covers forming a green bridge for insect pests and diseases;
• Removal of covers with livestock gives valuable extra residue ‘processing’;
• Remedial metal may still be required in silty soils, in particular;
• Seed costs higher than £40/ha are likely to need special justification;
• Cover mixes should be carefully matched to machinery capabilities;
• Systems should ideally allow sowing immediately after combining the previous crop;
• Spraying-off covers early in the New Year is generally best for spring crop establishment.