Catch and cover crops can give good control of black-grass and useful improvements in soil structure, growers have been told. But everyone needs to choose and manage them with particular care. And no one should expect too much in the way of immediate financial benefits.

This was the conclusion of the latest in-depth research into catch and cover cropping ahead of autumn and spring-sown cereals reported to the growers and agronomists attending the  spring open day at Agrii’s Stow Longa Technology Centre.

“Many years of trials on the site show us we can expect a winter wheat yield benefit of around 1t/ha from this degree of black-grass reduction. However, across the catch crops we saw an average advantage of less than 0.25 t/ha, and even the best mix gave us only around an extra 0.5 t/ha.

“This and the fact that we recorded no yield benefit whatsoever from cover cropping ahead of early April-drilled spring wheat suggests there’s much more we need to understand about the technique,” Steve Corbett cautioned.

“Carefully-controlled scientific investigation is overcoming a good amount of my initial scepticism about cover cropping. I have to say, though, the jury is still very firmly out on their actual financial value. Especially so, as we’ve seen greater improvements in soil structure and reductions in black-grass levels from the rotational plough control we also have in the current trials programme.”

Insisting that growers should expect the overall benefit from cover cropping to be long rather than short-term in most cases, Steve Corbett stressed it will also fundamentally depend upon the right management.  By which he primarily means correct species selection for the task in hand, cost-effective establishment at the right time and best practice in establishing the following crop.

“You have to choose your cover crop knowing what you want to achieve,” he advised.

“We’ve found oil radish to be very good at breaking through compacted soils, for instance. but less good at competing with black-grass than species developing more above-ground biomass. Particularly good at improving crumb structure and reasonable at dealing with compaction but again rather lacking in the weed suppression department are black oat and vetch mixtures.

“On the other hand, both phacelia and white mustard are better at suppressing weeds, good at drying out soils and excellent at accumulating top growth although unlikely to do much compaction-busting. So it’s very much horses for courses.

“Early establishment is especially important for catch crops ahead of late-sown winter wheat,” added Steve Corbett. “In our experience many cover species need to be sown before mid-August and, as with all small-seeded species, sufficient moisture and good seed-to-soil contact are essential. This may not be easy in some seasons and obviously adds to workloads at one of the busiest times of the year.

“It’s important to consider the previous crop too. Unsurprisingly, establishment after a fallow seems to work best.  Failing that, we’ve seen much better, more even cover crop development after spring cereals than winter ones because of their lower crop residues.”

While a simple low-cost cultivator-mounted seeder has proved perfectly adequate for cover crop establishment on the heavy ground at Stow Longa, Mr Corbett and his colleagues have found drilling subsequent crops into covers requires particular care where black-grass control is a priority.

“Drilling on-the-green into a cover previously sprayed off with glyphosate works well,” he said. “Wherever black-grass is a problem, though, the critical thing is to move the least amount of soil when you drill.

“Minimal disturbance disc drilling has made all the difference in our trials as it wakes-up the least amount of black-grass. Indeed, it has typically left us black-grass ear counts less than half the level of a 7” point and strip till leg.

Using standard cultivation costs, winter wheat calculations from the most recent Stow Longa trials show the catch crops delivering a slightly higher average margin over input costs than the cultivated stubble controls but a marked lower margin than the plough ones (Figure).

Minimal disturbance disc drilling of wheat into the catch crops delivered a markedly better average margin than the alternative wide point strip drilling regime. And the most economic combination of catch crop and wheat drilling system even out-performed the rotational plough control.

“It all goes to show that the devil really is in the detail with cover cropping,” concluded Steve Corbett. “ And in most cases, you are unlikely to get a direct financial return in the first season. Which, in turn, underlines the importance of knowing what you want from a catch or cover crop and employing the best information and advice to get it.” 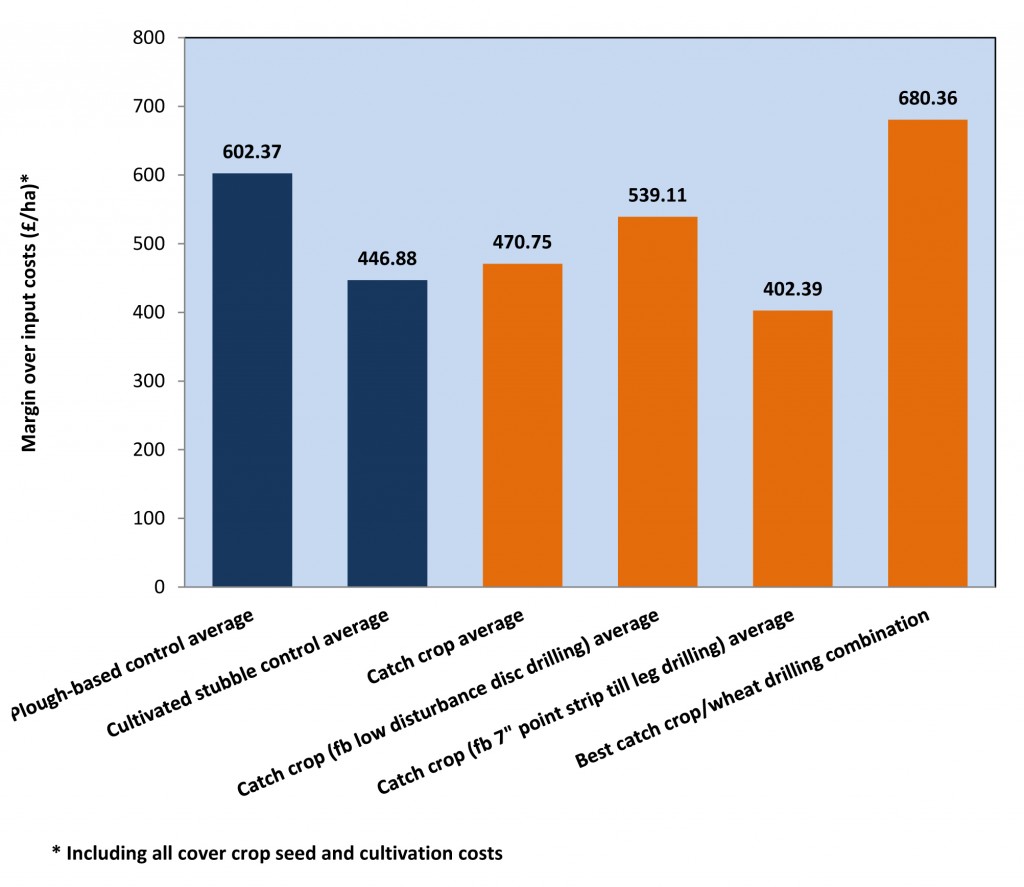