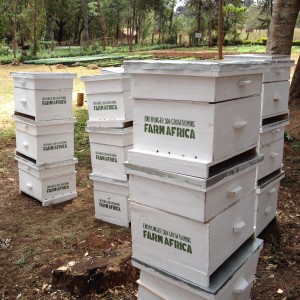 Some of the finished beehives

Well what a whirlwind. Having been back at home for ten days now I probably should have had chance to digest what happened over the rest of the week in Tanzania, although that is easier said than done…

The week really was something of a spectacular roller coaster ride, complete with bumpy seats, highs and lows and ending in complete jubilation. Day two of building felt like a fortnight in itself. After the slow progress on day one we had all been shocked into overdrive. Alarms were set even earlier and plans and methods for organising the teams were getting thrown around like our lives depended on it. It was a full on day of building and by the end of the day we had upped our total to a much more respectable 48 hives.

Day three and the final push to complete the hives was probably the most surreal day of my entire life. The morning was an exhausting flurry of activity. The incessant ‘chop chop’ encouraging us to build faster was beginning to raise blood pressures and tension was running high. Injuries were imminent! With Lawrence cracking the whip and no one daring to stop, even for a moment, we ended up with a fantastic total of 58 hives – an achievement we are all incredibly proud of. Having only ever held a hammer to hang up a picture, my new found abilities to bodge up a jig to hold all the pieces together and use of a chisel to make them all fit came as a revelation. If anyone amongst us had feared that we were not going to be challenged enough, they had been proved wrong, very wrong indeed.

The immediate celebrations were odd, although over the moon to put down the tools our weariness led us to wonder what it was really all about. We had made a load of beehives but now what, how did we report this back to home. Fortunately a visit to a local apiary helped us to start to piece it all together. We met with Lucia a former recipient of some hives back in 2006. Lucia talked about how it had helped her, allowed the women to work and make their own way and paid for her children’s education. Each hive costs $90 to buy and to people living on $2 a day that is a huge sum of money. With Farm Africa’s provision of eight hives she managed to increase her income and buy four more hives for herself. Lucia also runs a local shop selling the honey and looks after the processing centre so that others in the area can process their honey in a clean and hygienic environment. She is planning to begin producing other goods using the waste beewax left over from the processing such as candles and lotions. It was great to see some hives in action and even helped us to understand the importance of each of the components we made, including the 1,160 wire frames which had nearly made our fingers bleed and brains melt! 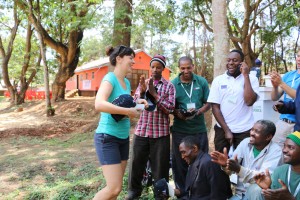 Handing out Agrii caps to thank the local carpenters

On leaving Lucia we were en route to the village of Endoji, high up in the Nou Forest and hours from the office. The village was to be one of our two recipients of the hives we had produced. The reception that we received on arrival in Endoji was like nothing I have ever experienced before. The village choir sang and danced us in surrounding the truck in which we travelled. When we could finally get off we were treated like royalty and sat at a top table. The singing, dancing and blessings were mesmerising, so vibrant, colourful and heartfelt. Through a translator we were welcomed and thanked so many times by the wonderful smiley people of Endoji. The ceremony bought tears of joy and disbelief across the ‘Bee Team’. The smiling, happy faces and the knowledge that we can and have really done something that can make a difference is an incredible feeling. We had seen the hives as a small gesture and had worried what the challenge meant, but it was clear that small gestures really mean everything to people that have nothing. 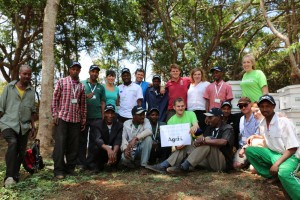 Thanks to Agrii for the sponsorship

Of the whole week the ‘Endoji Day’ really was the best. We spent the majority of the morning being shouted out for not churning out the last hives with enough haste and were exhausted into wondering what it was all for, but that arrival in Endoji and seeing the impact that giving people another way to make a living can make, seeing that enthusiasm and happiness was the most rewarding experience that could ever have happened. In the words of fellow Bee Team member Miss Pickering ‘Every child in Tanzania has a smile bigger than the last. I want to go back.’

« Return to the Blog listings