Great strides have been made over the last week with farm operations in full flow. Winter cereals have appeared to slow down in growth a little with the massive temperature swings – but warming up now.

Needless to say, that the inevitable has happened and after many months of rain, we now need a nice, gentle…. rain. Anyway, who said farming is easy, we just crack on and keep making decisions!

Certainly, work on our ifarms and trials series across the Country has gathered pace very nicely and I would really like to share the experiences on these sites. So please take a look to see what’s being going on…

Sunk Island, Hull, East Yorkshire
Starting with this wonderfully named ifarm, Jim Carswell who helps co-ordinate all of the sites in the North region discusses the progress being made there.

To introduce the site, he states ‘We have had to change plans for the site east of Hull on the deep, highly fertile soils around the Humber estuary. The field was due to be drilled last autumn with winter wheat (after winter oilseed rape), but the delay waiting for blackgrass to emerge, then consistent rain during late 2019 and early 2020 prevented any sowing.

The host farmer changed his plans for the field and that allowed us to sow 11 varieties along with other plots investigating seed rates and seed treatments. Seedbed conditions were dry on top but ‘tender’ below – plots went in well but rolling would be delayed. Local rain in the week after drilling should aid even establishment.

Saltash, Cornwall
A new location for this season and its way down in the South West. The site is featuring plenty of work and it is off to a very good start. John Harper is the coordinator here on this sandy silt loam soil (SZL) at Trerule Farm, Trerulefoot, Saltash.

Here John leads us through the Agrii winter barley regional trial which has 15 varieties, drilled 23rd October @ 350 seeds m² for conventional varieties and 245 seeds for hybrids

AgriiFocus, Swindon, Wiltshire
One of our main technology centres, here located in the West of the Country and it has been a very useful site to assess varieties for disease amongst a plethora of other work.

With much more detail of the site to follow, this short clip was sent by the contractor we use on this site and it gives a view of the soil type and drilling conditions.

Drilling spring barley on 31st March, generally @ 375 seeds m², this is part of the Agrii spring barley national series and this trial has 39 varieties within it.

Southoe
Following on from last week where David discussed two different fields and the cultivations ahead of drilling spring barley at his own farm, how are they shaping up?

The first, Old Hopyard which was previously drilled to spring barley in 2019, then a cover crop, drilled with Explorer a week ago and is chitting nicely. This field is also being used to engage with ELMS, carbon sequestration and inter cropping, so should be very interesting going forward.

Secondly, Long green which was to be drilled last autumn, but left mainly to stubble with a few strips of other operations as discussed last week has now been drilled and rolled. David shares his views on how the seedbed looks and will drilling slightly deeper in to moisture make the difference?

Revesby Estates, Lincolnshire
Revesby features this year as an Agrii Digital Technology Farm site looking at winter wheat nutrition work in particular. So, there will be many assessments taken during crop growth by the trials team and using the Rhiza system to capture as much digital data as possible.

The estate also hosts many Agrii variety trials including evaluation of new crops going forward such as haricot beans and chickpeas.

This video clip was taken just after the drill had planted Laureate spring barley @ 400 seeds m² on 31st March, in to spring oats which were left as volunteers after last year’s harvest. The intention was to leave them as a cover crop, graze with sheep and plant in the spring.

However, this soil has a high silt content and sits just about sea level, so because of the extremely wet winter the idea was abandoned as there was some water stood on it with the water table only a couple of inches below the surface.

It is now draining but will move from wet to very dry and very hard quickly. Timing it before complete drying occurs has helped the Horsch 10m Sprinter drill unit to make a very reasonable job of placing the seed in a band under the oats and into a reasonable soil layer that has been saved from baking out by the Spring oat cover crop which had glyphosate applied and mown off before drilling.

This spring with soils moving from wet to very dry quickly means that all these techniques and tricks are needed to help establish decent crops. Agrii starter fertiliser has also been placed at the rooting zone with this drill unit.

Peter Cartwright the farms manager can be seen checking seed depth and moisture levels after the drill has passed.

Steve assessed the Agrii National winter oilseed rape trial located at Revesby (42 varieties) on the 26th March, short video to show a very decent trial which will be invaluable in a season where so many oilseed rape trials have been lost across the industry.

Cultural control in winter oilseed rape, Bedfordshire
The work looking at cabbage stem flea beetle control in Agrii trials has been extensive over the last few years. Undoubtedly just as with grassweeds, there is no one single answer and it greatly depends on getting several factors right to achieve cultural control of this pest.

There is an updated summary of the work soon to be circulated, but in this sort clip, I mention several factors from our findings which have been put to commercial use by one of my growers in an area of very high pressure. We can indeed be successful if we get all the factors right.

Stow Longa, Huntingdon
The final block in the rotations trial at Stow was drilled on 30th March.

Previous crop was hybrid barley, very solid yields around 10.5 tonnes per hectare with a large quantity of straw. In the ploughed area after harvest, this dealt with the straw well, but the levels of straw on the surface in the cover crop area and to a degree the deep one pass area was of concern for spring drilling with the Sky drill – hair pinning being the largest concern, would the discs get held out of the ground in the worst straw areas?

Anyway, Steve talks through how we got around this and WPB Elyann @ 350 seeds m² was drilled successfully.

Leadenham, Lincolnshire
Glebe farm, Leadenham (Roy Ward farms) is another strong focus for work as an ifarm, but also for replicated trials for the Lincolnshire region.

Last autumn, a major piece of work was conducted and became known as the Leadenham cultivations project.

The challenge for the farm ‘can we reduce our cost of crop establishment, but still maintain yield and blackgrass control’

The current system which has worked very well for several years is the Simba Solo, straight after harvest when conditions are dry for the equipment. The ground is set up at depth at around 200mm, pressed and left for drilling later October or indeed into the following spring. This same practice is used also for the sugar beet crop grown on this heavy land.

This system has provided high yielding crops and is also working as part of the blackgrass management strategy. The challenge now is can we reduce these cultivations and not have a negative effect on yields and blackgrass levels?

We therefore set up in a 45acre field a cultivation project, inviting relevant machinery manufacturers to a cultivations event (13th September 2019). They were all asked to set up the ground to drill spring barley the following March/April. The original plan was to then have a series of different drills to establish the crop, however due to the ongoing issues, this was not possible.

So, we have used the farm drill system (8m Simba Freeflow) across all of the cultivations.

We have assessed soil conditions in terms of structure and wetness at various depths throughout the winter period with some very interesting differences. 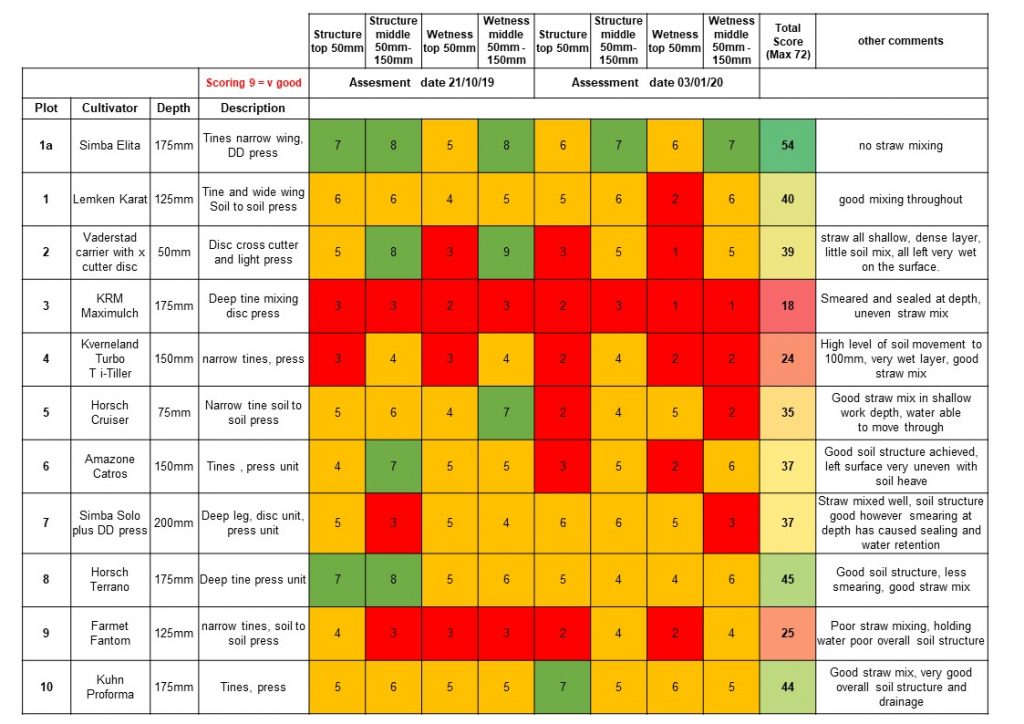 The whole area across all cultivations will be taken through to yield and finally margins achieved with an important review on the cost of establishment. We will need to consider if less cultivations can be part of a rotation system going forwards, other factors including carbon footprint will also be considered.

We must thank Andrew Ward and the farm staff for all their help with this large-scale project.

A field was chosen with a high level of ryegrass and a six hectare block, divided in to three was created. The three cultivation strategies were plough, straw rake or Sumo Trio (minus legs). These were set up very nicely and the levels between ryegrass emergence and plant numbers assessed with huge differences as you might expect, bearing in mind the field had not been ploughed for several years.

However, autumn drilling had to be abandoned which was a great shame, but thanks to all the help of the hosts Roger and Mark Mills along with agronomists Rob Daniel and John Moore, we have reorganised the whole drilling programme and it now reflects spring barley varieties x seed rates x seed treatments, plus spring triticale and spring oats.

The trial was drilled on 3rd April using a Sumo Versa (+/- legs down) and will be assessed through the season. We will harvest with a small plot combine and do the usual costings and final gross margin to give us an understanding of which system, species and varieties performed the best.

We will then resume with winter cereals this coming autumn.

My sincere thanks to all the R&D guys and girls right across the Country who are working in the most difficult circumstances to provide us with data going forward.

Meanwhile, we look forward to a little rain and let’s push on and make the very most of the season.