An innovative cultivations trial involving 10 different min-till cultivators setting-up 18ha of heavy clay ground in the autumn for spring barley drilling has underlined the extent to which Andrew Ward and his team at Roy Ward Farms in Lincolnshire could save time, money and carbon by further reductions in tillage.

The trial organised with Agrii trials manager, Steve Corbett and agronomist, Fred Fowler on the Leadenham iFarm followed each strip cultivated in mid-September 2019 with detailed autumn and spring soil assessments through to 2020 crop yields and margins for the most thorough comparisons.

The detailed evidence it provided showed cultivations costs could be more than halved from the farms’ established min-till regime without compromising spring barley yields, leading to the parallel improvements in both margins and carbon emissions being sought as part of Agrii’s Green Horizons initiative to improve the overall sustainability of UK farming.

It also demonstrated that this could be done effectively by modifying existing farm machinery rather than investing in expensive new equipment, encouraging the Glebe Farm team to step-up their efforts to progressively reduce both the depth of their tillage and the degree of soil disturbance.

“Looking ahead, I reckon we should be able to direct drill at least 40% of our crops each year with our existing kit,” Mr Ward says. “The detailed costings we maintain for each field show this would add a good £60/ha to the bottom line for our heavy ground. Part of this comes from a fuel saving of around 35 litres/ha – which would reduce our carbon footprint almost as much as cutting nitrogen use by 50kg/ha.”

Further reductions in cultivations from the single-pass Simba Solo standard are, it has to be said, only possible given the substantial improvements in soil structure the farm has achieved over many years – not to mention the zero-tolerance black-grass policy that has ensured no seed return for the past seven seasons.

“Reducing tillage to the bare minimum is a far greater challenge on Andrew’s heavy ground than it is on most,” points out Mr Fowler. “All the more so while continuing to grow sugar beet, and with the wetness of the winters we’re getting these days.

“That’s why Andy ran the 2019/20 trial on the farm’s heaviest field, with a clay content of more than 50% and around 30% silt. Not only that but it showed noticeable trafficking damage following the wet harvest, and 10mm of rain just ahead of cultivation left the soil below 200mm on the edge of practical workability.

“Our aim was to see if we could reduce the depth of autumn tillage appreciably and still leave the land in the most weatherproof condition for spring barley drilling without further cultivation.”

Set up and run by their manufacturers to this brief, nine different min-till tine, disc and press combinations worked the field alongside the Simba Solo at depths varying from 175mm (7”) to just 50mm (2”).

Soil structural and wetness assessments were made at two depths in the profile both a month later and in early January; Laureate barley was sown at 400 seeds/m2 on March 28 with the farm’s 10-year-old 8m Simba Freeflow drill; and the crop harvested on August 31.

Out of a possible maximum of 80, overall soil ratings from both assessments ranged from 18 to 45, highlighting major differences between the machines. Interestingly, both the lowest and the highest scores came from some of the deepest cultivations, and no real differences were evident by depth of working.

There was, however, clear evidence of smearing wherever the soil was worked into or too close to 200mm. At the same time, shallower working didn’t always give the best straw mixing or soil structuring.

Yield across the cultivation regimes varied from 7.40 t/ha to 8.20t/ha, again with little clear association with depth of working. In bottom-line terms, though, shallower working gave noticeably higher margins over inputs and establishment costs (Figure). 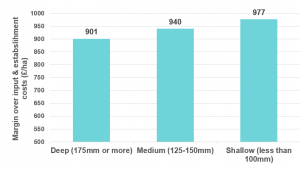 “A spring barley yield of over 8.1t/ha and margin of almost £960/ha after all input and establishment costs for the standard Glebe Farm cultivation regime is testament to team’s abilities here,” comments Mr Corbett.

“Even so, we saw an almost identical yield from the shallowest trial cultivation at just 50mm (2”) to add an extra £40/ha to the margin by lowering costs through faster working and lower fuel use. And this despite the fact that it was, arguably, less well-matched to the capabilities of the Freeflow drill than the established cultivation practice.

“As well as the fact that shallower cultivation can be appropriate for well-structured heavier soils, our detailed assessments underlined the particular importance of both matching tine and disc spacing and configuration to working depth, and the sort of press to soil type for the best results,” he adds.

“The spacing of the tines or discs across the cultivator governs the depth range over which it can still work the entire width of soil, shallower working needing closer spacing and vice versa. Equally, the press determines how well the ground is reconsolidated, weatherproofed and set-up for restructuring over the winter.

“It’s crucial to get both these essentials right so the spring crop can be drilled into decent seedbeds without further working for the best seed to soil contact and moisture preservation.

“Machinery set-up on the day also proved itself to be as important as machine type. Several operators failed to recognise and avoid the issue of soil near the plastic stage in the profile, cultivating into it to cause smearing and water-logging.”

Never known to waste time, Andrew Ward and his team have already been putting these and other lessons learned from the trial to good effect in their tillage reduction efforts. In doing so they have been encouraged by the performance of their home-built, 5.2m Elita cultivator run alongside the trial as an experiment.

Originally developed for low draft, low disturbance oilseed rape sowing with the assistance of designer, Phillip Wright of Wright Resolutions, the machine’s narrow-winged legs and two rows of DD rings move far less soil than the Solo. It also has far greater flexibility for shallower working – down to 100 mm (4”).

Although not included in the detailed yield and margin evaluations, even run at 175 mm (7”) in 2019, it scored markedly higher in the soil assessments (at 54 out of 80) than any of the 10 machines in the trial, leaving the ground well set-up for spring drilling with the Freeflow. What’s more, the farm records show total operating costs of £50.00/ha against £65.71/ha for the Solo.

“While still keeping our Solo so we can move soil at depth whenever we need to, switching our min-till emphasis to the Elita means we can cultivate much shallower for greater cost and carbon savings wherever conditions allow,” Mr Ward explains. “At the same time, we are finding that, with a little adaptation, we can successfully go one step further by direct drilling with our Freeflow.

“As a rule, the drill doesn’t work well with lots of trash. But, in addition to coping with even the shallowest of our trial field cultivations, last spring we got it to do a very nice job of sowing spring barley directly into a sprayed-off winter cover by taking the front tines out. So, we have some very useful extra flexibility here without spending any money on new kit.”

Building on this success, the team are looking to see whether they can extend Freeflow direct drilling to their winter wheat this season by growing spring beans ahead of it.

Providing the soil structure is right to start with, they reckon the particularly low trash levels from the beans should make this possible. The fact that their zero-tolerance approach to black-grass means they are never afraid to leave wheat drilling until well into October means a later harvest holds few concerns for them.

“Rotations musts be an essential element of any move to further improve soil health and reduce tillage,” says Mr Fowler. “We have to see crops like spring beans for the wider value they offer rather than just immediate gross margin.

“We also have to appreciate that rotations – and the weather – limit the extent to which reduced tillage is always practicable on heavy ground,” Mr Corbett notes. “With sugar beet in the rotation, for instance, it’s essential to maintain the flexibility to use the right amount of metal at the right depth whenever it’s needed.

“Having said that, after the disastrous virus yellows losses we’ve suffered following the withdrawal of neonicotinoid seed dressings, the long-term future of this crop – like oilseed rape – in our mix has to remain in some doubt,” observes Mr Ward.